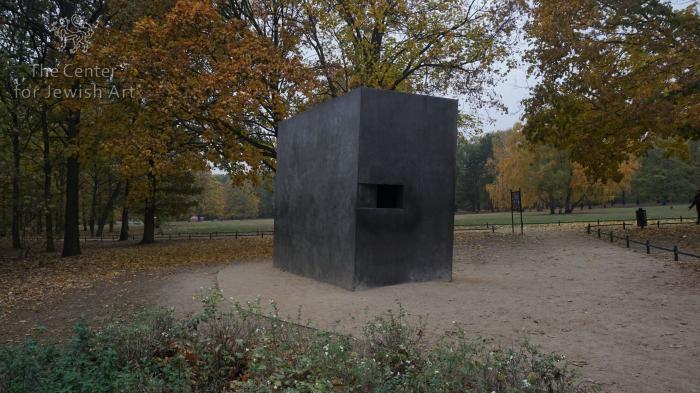 The monument is a free-standing unadorned concrete block, set flush on the ground but built with a slight tilt so the monument appears to be unstable, even from a distance, despite its massiveness. On one short side at just below normal head height is a window, set off-center, through which visitors can view a short film. The initial was a one-and-a-half-minute film loop of two men kissing, directed by the Danish director Thomas Vinterberg. The film is changed every two years and has included scenes of women kissing. The effect is to force the viewer to confront what might be unfamiliar in a voyeuristic manner, akin to a traditional “peepshow,” emphasizing the hidden nature of most homosexual relationships and activities under the Nazis and for many decades following.

The placement of the video within the concrete monuments reminds the viewer of the necessity of hiding for homosexuals, and the reality of imprisonment for an unknown number of homosexuals if identified and captured.

The is no inscription on the monument, but an adjacent sign gives some of the background history in German and English (see photo). 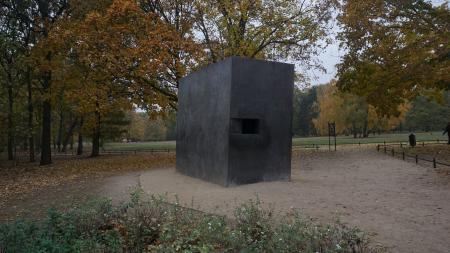 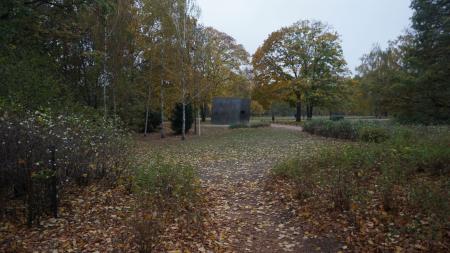 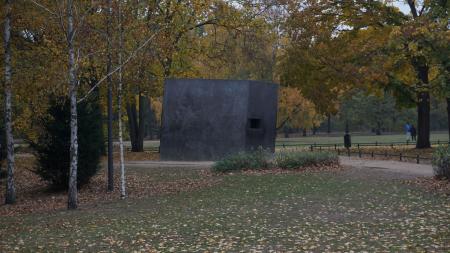 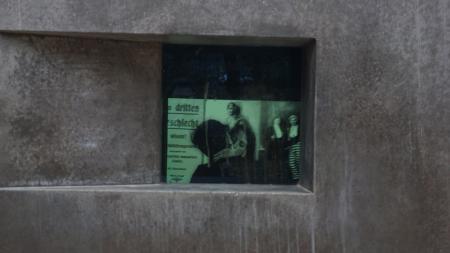 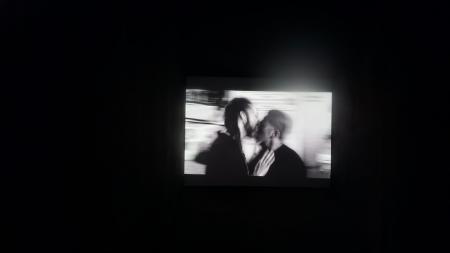 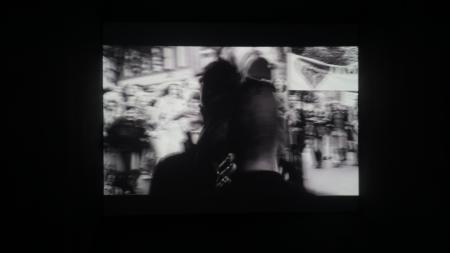 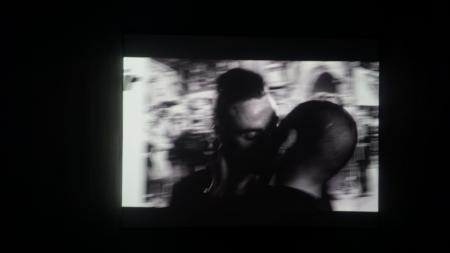 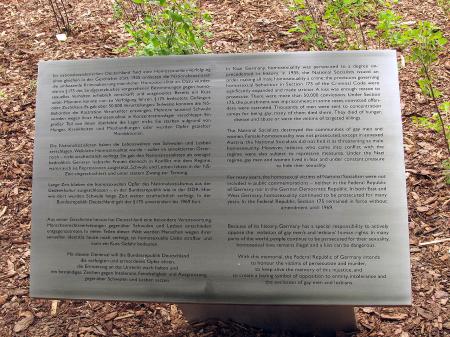 On 12 December 2003, the Bundestag approved the erection of a memorial in Berlin at the boundary of Tiergarten (near the Memorial to the Murdered Jews of Europe). A competition for artist was launched, which Michael Elmgreen and Ingar Dragset won.

There was public discussion of the content of the video to be installed within the monument, and whether it should reference only homosexual men, who were specifically targeted under Nazi law, or also include lesbians, whose systematic persecution is not well documented. A compromise was reached to allow the video to be changed every two years and to show kissing gay men and kissing lesbians.

The upright concrete form of the monument deliberately relates to the thousands of upright concrete forms across the road at the Memorial to the Murdered Jews of Europe (Denkmal für die ermordeten Juden Europas) which was inaugurated in 2005. There was criticism of the design and placement of the monument by some Jewish scholars and activists who thought that the proximity of the two memorials created a false equivalency. Others argued that the two sites were substantial different, but it was appropriate to link all forms of Nazi-era intolerance and persecution of minorities. This debate continues and was further stimulated in 2012 by the opening of the Memorial to the Sinti and Roma Victims of National Socialism, designed by Israeli artist Dani Karavan, also located in the Tiergarten.

Near the memorial is a sign written in German and English where visitors can read about the Nazi persecutions. In 1935, the law was changed to penalize kissing in public with a stay in prison or a house of correction (criminal code section 175). 50,000 sentences were passed. In addition to imprisonment, many men were castrated. Lesbians were also targeted by the Nazis for “antisocial” behavior. In concentration camps, homosexual men were made to wear a pink triangle and lesbians a black triangle. Section 175 was continued during the 1950s and 1960s and homosexuality remained illegal. The law was reformed in 1969 but voided only in 1994.