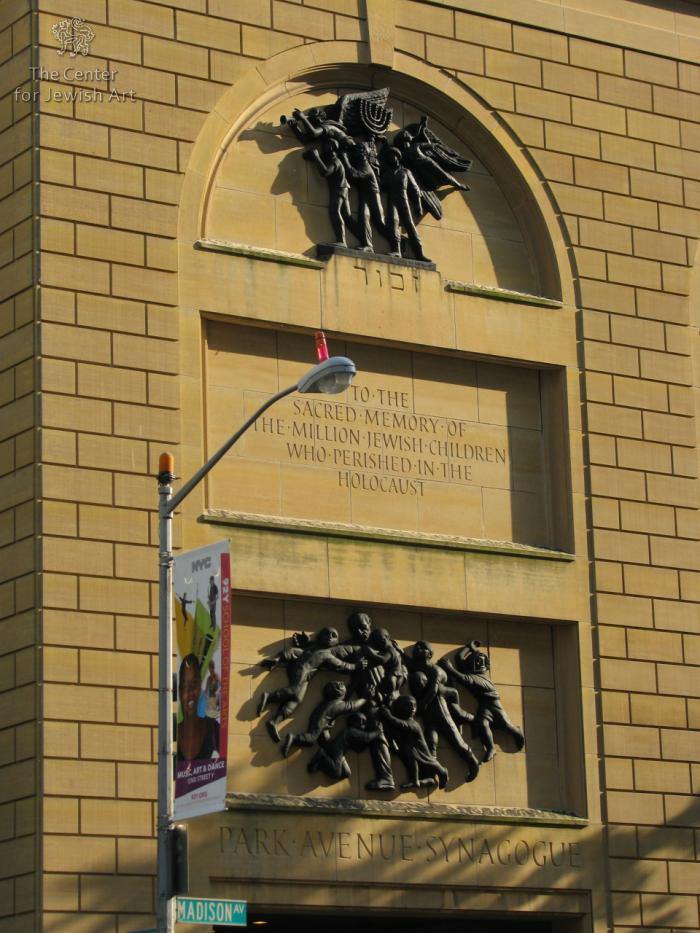 Memorial to Jewish children who perished in the Holocaust

Dr. Janusz Korczak and all children killed in the Holocaust, and the pioneers and fighters who founded the State of Israel.

The memorial is one of two parts of a commemorative monument originally mounted on the Madison Street façade of the education building of the Park Avenue Synagogue. The memorial was dedicated to the fate of Jewish children who perished in the Holocaust and the founding of the State of Israel.

The original memorial consisted of two figural bronze reliefs by sculptor Nathan Rapoport set in an architectural frame and accompanied by memorial inscriptions. In 2019 the sculptures were moved, and the inscription removed entirely.

The composition was meant to be read from bottom to top:

The lower panel helds a sculptured bronze relief showing Janusz Korczak surrounded by the children of his orphanage as they went to their death at Treblinka. These figures are surrogates for all the child victims.

The central panel contains an inscription cut into the stone which reads:

The upper panel included a bronze relief sculpture of three Israelis—a young halutz, a soldier, and an older man, who carry back to Israel the Menorah originally in the Temple of Jerusalem and removed by Titus and the Romans during the destruction of Jerusalem. Above the figures, who march from right to left, are two winged figures blowing trumpets. The composition is to be seen in opposition to the famous relief from the Arch of Titus in Rome.

Between the upper panel and the dedication there appears in Hebrew the word זכור ("Remember!") —as a reminder to all who view the building that the catastrophic events depicted on these sculptures are not to be forgotten.

In 2019 the building re-opened after a renovation and the placement of the two bronze reliefs was changed. They were moved to the 87th Street facade of the building and placed side by side in front of windows, so there is no longer the contrast of bronze on masonry. The reliefs now appear more decorative rather than commemorative. 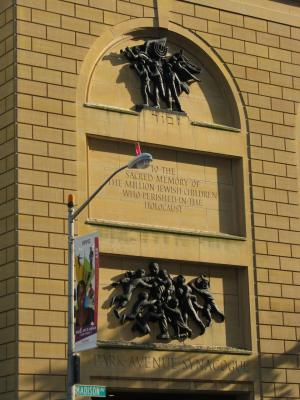 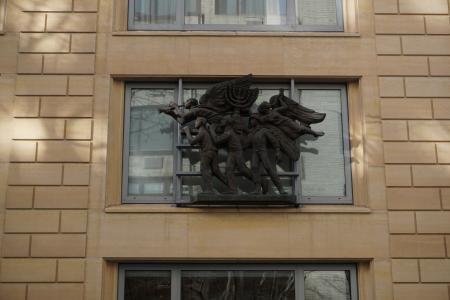 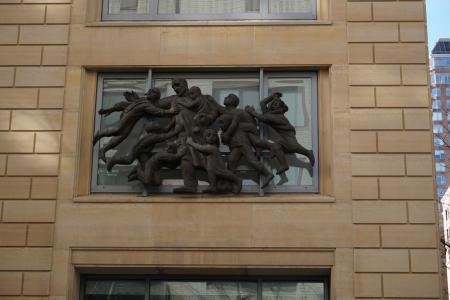 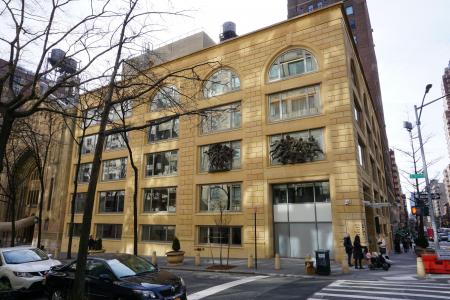 The sculpture depicts Dr. Janusz Korczak (Henrik Goldszmidt), in charge of the Jewish Orphanage in Warsaw, who when he arrived with the children at the Umschlagplatz, “the German commander told Dr. Korczak that he had received a message from his superiors that Dr. Korczak would not have to go with the children to Treblinka. He replied that his children would be terrified without him. The last sight of him was as he walked up the ramp into the cattle car with his arms outstretched on both sides protecting the children who flew to him from both sides.” [Nadich, Park Avenue Synagogue]

This is the Dr. Korczak depicted in the relief above the entrance to the new school building.

In December 1980, the congregation dedicated a new education building at the corner of Madison Avenue and East 87th Street in New York. The building is dedicated to the education of Jewish children in the memory of the “million children who perished in the Holocaust” [n.b. we now know the number was much higher]. Sculptor Nathan Rapoport created a memorial sculpture to adorn the Madison Street façade of the new building. Rapoport was engaged by Mr. and Mrs. Leon Jolson, who had previously arranged for versions of Rapoport’s Warsaw Ghetto Uprising memorial to be installed at Yad Vashem in Jerusalem.

The dedication of the sculptures, which coincided with the celebration of Hanukkah, was announced in the congregation Park Avenue Synagogue Bulletin, Volume XXXIII, No. 3 (Nov. 1980):

One of the most moving events of the Week of Dedication will be the unveiling of the sculptures affixed to the exterior of the building, the work of sculptor Nathan Rapoport, and the gift to the congregation of Mr. and Mrs. Leon Jolson.

The congregation will first gather in the Sanctuary at 2 P.M. to participate in a program highlighted by an address by Samuel Pisar, author of “Of Blood and Hope” a book which describes his concentration camp experience as well as that of his family. His book has received international attention.

His Excellency, The Ambassador of Israel to the United Nations, Yehuda Z. Blum, a scholar of international standing, will also speak at this time of remembrance. Ambassador Blum is a survivor of Bergen-Belson.

The congregation will then move out-of-doors to witness the actual unveiling of the sculptures by Mr. and Mrs. Leon Jolson.

This Week of Dedication is one of high emotion, one filled with meaningful and significant events, rich in symbolism, of which every member of the congregation can only wish to be a part.

Just as the synagogue has set aside this time as a very special time, it is hoped that you will do the same in order to participate in every facet of the most historic week in the nearly 100 years of the life of our synagogue family.”

Richard Yaffe spoke to Rapoport while the work was being created and reported on the conversation in his 1980 book Nathan Rapoport Sculptures and Monuments:

“Rapoport was hard at work on the finishing touches, the casting in bronze, of his latest project, for the entrance of the new school of the Park Avenue Synagogue in New York City. Rapoport im­mediately saw the school as the perfect place for a memorial to Janusz Korczek. Luckily, Dr. Judah Nadich, the rabbi of the congregation, did not need any convincing to dedicate the school to this martyr and his schoolchildren, and to the million Jewish children who perished in the Holocaust.

"What I have done," Rapoport says, pointing to a sketch of the memorial, "is to symbolize the mar­tyrdom and redemption. You see the menorah com­ing back to Jerusalem from the Arch of Titus, which was put up in Rome to commemorate the defeat of the Jews and whose inscription says that Israel would not rise again. It is Titus' Rome that is in ruins, and it is Israel that has survived and is building."

Three people are carrying the menorah back to Jerusalem — a sabra (a native-born Israeli), the Israel Underground which liberated the country from the British, and the Zva Hagana Yisrael, or Zahal, the Israeli Army of Defense. And the Angels of God proclaim the victory, "I brought back the menorah which is the symbol of redemption."”