The text of the Book of Esther is copied within pointed arches and the spaces between them are filled with floral motif on the dark background. Exceptionally, inside the twenty-sixth panel, a rectangular frame is drawn in which the text is written. The prefatory and final panels include additional texts accompanying the Megillah reading.

The scroll is mounted on a wooden roller decorated with an openwork; the scroll is not stitched together with a roller. 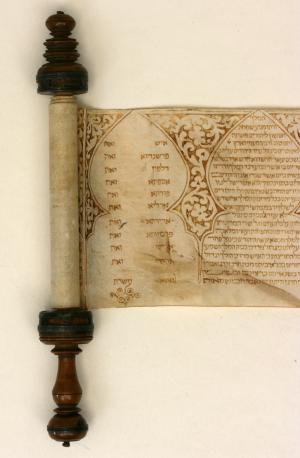 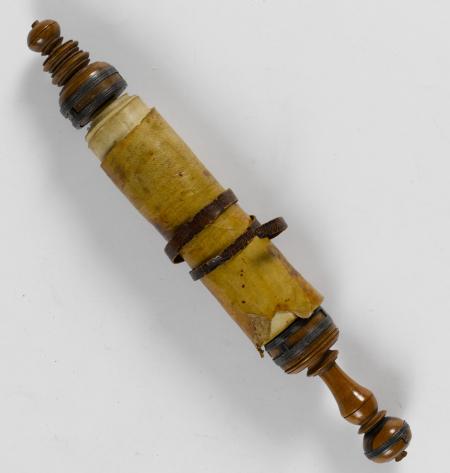 The scroll - except for the prefatory and final panels - is well preserved. The opening part of the scroll is damaged and the text is less legible than in the following panels. The final panel is incomplete; it lacks its upper and lower parts.

The Book of Esther in Hebrew that is preceded by the poem Kuma Elohim ezrata li and followed by the benedictions and the fragments of the poem Shoshanat Yakov.

The scroll is formed of 4 sheets, in total containing 26 columns of text with 22 lines each, except for col. 22 which has 11 lines divided into two half-columns. There are also prefatory and final panels.

The text is written in Hebrew square Oriental script in brown ink on the flesh side of parchment membranes. The blank side is yellower than the side of the text and decorations.

There are two decorated letters ע in the scroll.

The ruling is made with a hard point but the lines are barely visible.

The membranes of the scroll are stitched together.

The text in the final panel is written in semi-cursive script.

The decorations in the scroll are executed in the same ink as was used for writing the text of the Book of Esther, but the additional texts in the prefatory and final panels are written and decorated with different ink.

A leather strip is stitched to the right edge of the first membrane.