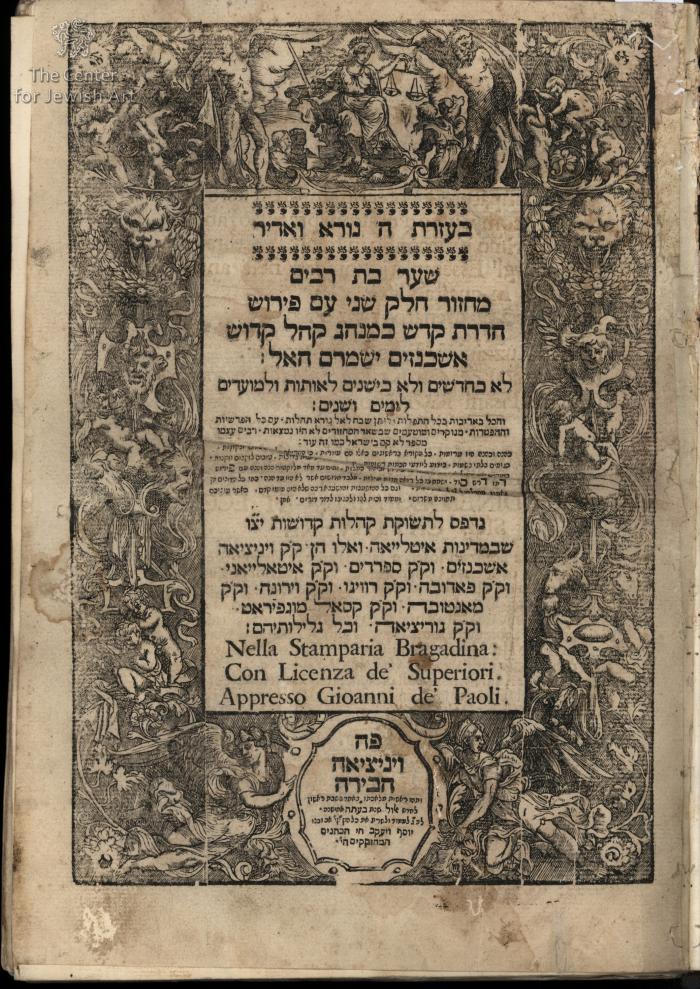 Sha'ar Bat Rabbim, Machzor with the Hadrat Kodesh commentary, according to the tradition of the Ashkenazi community. Venice, [1711-1715]. Elaborate copy with wide margins.
The machzor was printed through the efforts of the Italian communities (specified on the title page and the colophon), who promised in advance to purchase printed copies. The machzor was printed and sold in separate pamphlets: "Every time you bring them one leaf of the machzor…they will give you four 'pshutim' in return..." (Leaf 3/1). These are two volumes which contain the first part of Part 1 [composed of prayers for weekdays, Shabbat and Rosh Chodesh, Selichot and Yotzrot, Passover prayers] and the second part of Part 2 [composed of prayers and Piyutim for Yom Kippur, Succot, Hoshana Rabba and Simchat Torah]. On Leaf 362/1: "A nice new entreaty for times of plague, G-d forbid". At the beginning of the first volume is a title page illustrated with an elaborate copper etching. Volume 1/a until the end of the Pesach machzor: 1-228 leaves. Volume 1/b begins with Pirkei Avot: 229-360 leaves. Volume 2/a, siddur for everyday and Shabbat, Selichot, and Rosh Hashana prayers: 1-193. Volume 2/b, Yom Kippur prayers: 194-372, 377-384 leaves.
These 4 sections of a Machzor, bound in two volumes, are unusually large and luxuriously printed. There are decorated title pages and interior illustrations, including thos of the Zodiac.
A sumptuous and extraordinarily large Machzor printed for the use of the Chazan at the request of the Ashkenazi Congregations of several leading Italian communities in the Veneto and surrounding areas. It is stated on the title page that it was published for use by congregations using the Ashkenazi, Italian and Sephardic rites. Machzor with the Hadrat Kodesh commentary according to Ashkenasi custom… printed to fill the longing of the holy communities in Italian countries, Venice communities Ashkenasi and Sefardi and Italian and Padova and Rovigo and Virona and Mantova and Casale Monferrato and Gorizia and all their surrounding regions".
An elaborate woodcut frame embellishes the title page. In all likelihood, this frame had been used previously for a non-Jewish text. A number of illustrations appear within the Machzor, including a representation of the zodiac.
In 1550 Alvise Bragadin established a Hebrew press in Venice, thus ending a brief monopoly in Hebrew printing in Venice enjoyed by Guistiani (after the closing of the Bomberg press). This press continued as one of Venice’s leading Hebrew print-shops, issuing Hebrew titles in the 18th C under several generations of Bragadins (the last of whom was Alvise III). Throughout the years, the output of the Bragadini press was considerable, and covered the gamut of Hebrew works. The press was somewhat unusual, however, in that the Bragadins themselves did not always take an active role in their printing-house, leaving its operation to other printers, and lending their name to other presses.
Volume 1 [Part 1]: 228 leaves. Volume 2 [Part 2]: 194-372, 377-384 leaves. 38 cm. 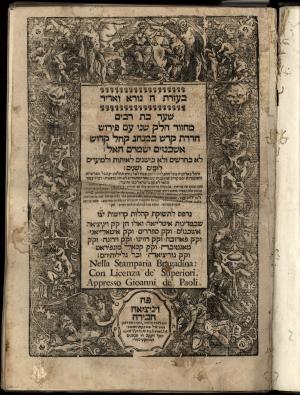 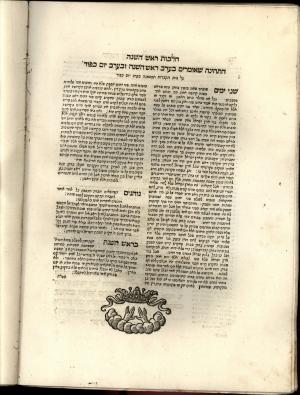 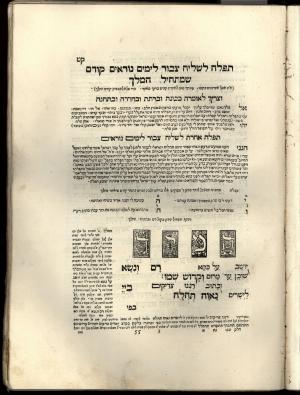