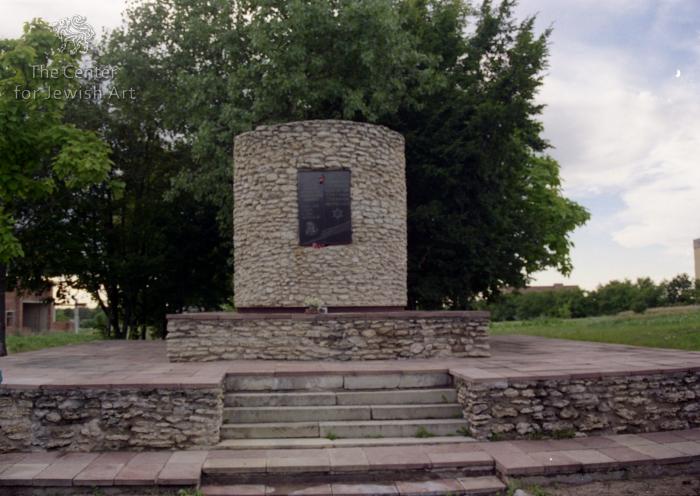 The cylindrical memorial on the high stepped base was placed at the mass grave in Kremenets in 1992. The monument is decorated with two marble plaques inscribed in Ukrainian and Hebrew.  The plaques are engraved with Magen David and a grieving woman with her hand over her mouth.

The inscriptions on the plaque read:

Translation: Here in August 1942 were shot to death by the German Fascists 15,000 civilians of Jewish nationality [of Kremenets]. We bow our heads in thought, we will not let this calamity happen again.

Translation: Here are buried 15,000 victims – men, women and children, natives and residents of Kremenets who were killed and slaughtered by Nazi enemies and their accomplices. May God avenge their blood. May their souls be bound in the bundle of life in the State of Israel. 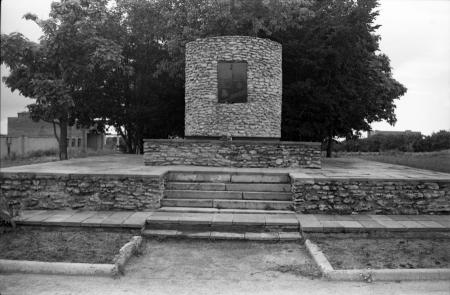 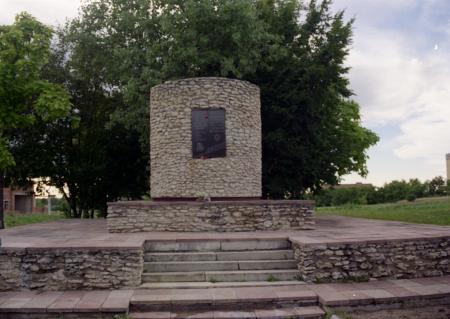 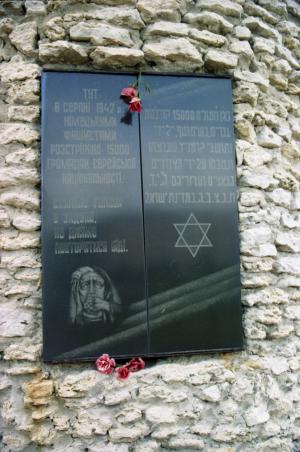 In the 1930s, there were around  7,000 Jews in Krzemieniec. With the beginning of World War II on September 1, 1939, the number of Jews increased since several thousand Jews from German-occupied Poland took refuge in Krzemieniec. After September 17, 1939, with the arrival of the Red Army in the city following the Ribbentrop-Molotov Pact, Krzemieniec became part of Soviet Ukraine. The Germans captured Krzemieniec on July 2 or 3, 1941. After the start of the German invasion, several hundred young Jews were able to flee to the Soviet Union.

The atrocities began in the first days of the German invasion with the pogrom and mass murders. On March 1, 1942, about 9,000 Jews were interned in a sealed ghetto. On August 10-11, the Krzemieniec ghetto was liquidated. Many of its inmates were shot to death, at the former WWI shooting range outside the town. The Jews of the nearby village of Berezce were also killed at the same murder site. Murders continued until October 1942.

The new memorial was constructed in 1992. It is located at the former Yakutsk Regiment shooting range in immediate proximity to the old memorial. The construction was funded by Israeli Jews originating from Kremenets.

The plaques that decorate the memorial were done overnight by the local tombstone master Volodymyr Krutevich.

The artist Volodymyr Krutevich recalled on carving the plaques:

"I remember that day at the end of August 1992 very well. While working at the combine of communal enterprises as an artist (carving portraits on monuments), my immediate superior, Strizhalko Dora Oleksiivna, approached me with a request to carry out an urgent assignment -  to carve two memorial tablets in basalt by the next morning. As she was a surprisingly decent person, I could not refuse her. But I could not have done this task alone in such a short time, because it was done by hand then. So I turned to my friend, KKM artist Oleksandr Ptashkin, for help. He agreed, and in one sleepless night we [made it and] justified Dora Oleksiivna's trust.
It was not so much extra income, because Israel paid the city leaders... And the most important thing was that neither Sashko [short for Oleksandr] nor I know Hebrew, so it was necessary to transfer everything literally to the smallest point. Everything was done without preliminary sketches, but at the opening of the monument, where we were also present, the Jewish representatives thanked us and shook hands, and our officials gave us smiles... You know what kind of country we live in" [Correspondence with Iryna Danylyuk, September 13, 2022, CJA archive]