The beit midrash is part of the shulhoyf, situated southwest of the Great Synagogue. The design for the beit midrash was prepared by the engineer-architect of the Marijampolė district Valerii Rybarskii in 1889, but the actual building differs from his design.

The design shows a rectangular, almost square, ground plan with two projections. The two-storey western part of the building housed a staircase, a storeroom, a central vestibule, and an auxiliary room. The women’s section occupied the floor above them. The eastern part housed the prayer hall, slightly wider than long, with six windows in the eastern wall, and three in both the northern and southern walls including those above the doorways. The Torah ark was planned in an apse in the center of the eastern wall. The octagonal bimah in the center of the hall was surrounded by four pillars; the ceiling above the bimah was elevated. Entrances to the prayer hall were planned from the western vestibule, as well as directly from the courtyard on the north and south. The main, western façade was two-storey, symmetrical, with a central projection under a gable roof. The corners of the projection were emphasized by pilasters; a rectangular doorway and large window occupied the central axis. The gable was topped with Tablets of the Law and the pilasters terminated with cone finials. The side bays of the façade were pierced by rectangular windows on the ground floor and round-headed ones of the first floor, retained in a common frame of ogee outline. The windows on the side façades were similarly framed. All façades were articulated by pilasters decorated with slender horseshoe-headed depressed panels. In the surviving photographs, the architecture of the beit midrash differs from the original design. The western two-storey part of the side façades has two windows on each floor and is framed by pilasters. Additional windows were made on the side walls of the prayer hall; thus the hall was lit by twelve windows, while the westernmost openings in those walls were doorways. In addition to the pilasters decorated with horseshoe-headed panels and the ogee window frames, which remained the essential elements of decoration, molded paterae, stringcourses and balusters beneath the windows and blind oculi in the frieze above them may be seen. The eastern wall of the apse was pierced with an oculus. As appears from the photograph, the eastern façade was decorated similarly to the northern one.

A preserved photograph of the prayer hall shows that stoves were installed by the western wall of the prayer hall and that the bimah stood in between the pillars. The walls were covered with murals. Another photograph presumably depicts the amud of this beit midrash. In the background are the columns of the Torah ark and the steps leading up to it.

The ground plan of the western part of the building was changed as well: the staircase was moved to the southwestern corner and the women’s entrance was placed on the southern façade. A kloyz of craftsmen, named Ḥevra Poalim (Society of Labourers), was situated in the auxiliary room in the northwestern part of the building. A photograph of its Torah ark, made in 1902, shows the carved upper part of the wooden ark with two rampant lions holding the Tablets of the Law topped with the Torah crown. Underneath the tablets are two hands in priestly blessing and the inscription Ḥevra Poalim.

In 1959 the building was reconstructed and adapted for industrial purposes. Only such original details as the western projection with a tall round-headed window on the western façade, the apse of the Torah ark on the eastern façade, corner pilasters with depressed panels, and cornices have survived. In the Soviet period, an extension was built on the northern side, making the structure more than twice as long as the former beit midrash. A low lean-to annex was attached to the apse and the northern side of the eastern façade.

In 2007, all the openings were rectangular and arranged in two tiers, except for the western round-headed window. An old staircase with steps of cast iron openwork and marks of former round-headed openings have survived in the interior.

Beit Midrash at 4 Kauno St. in Marijampolė - photos of 2022
Summary and Remarks 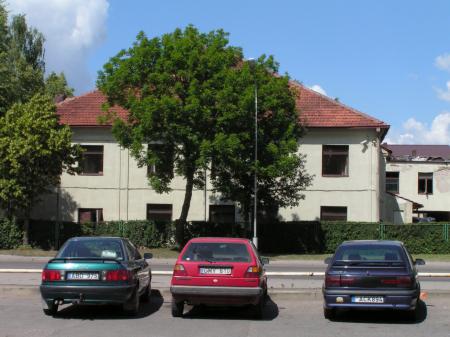 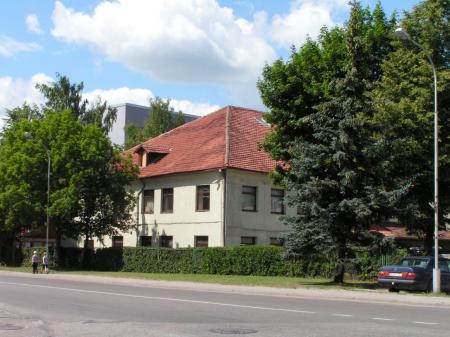 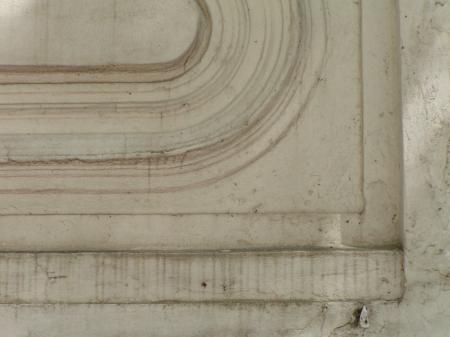 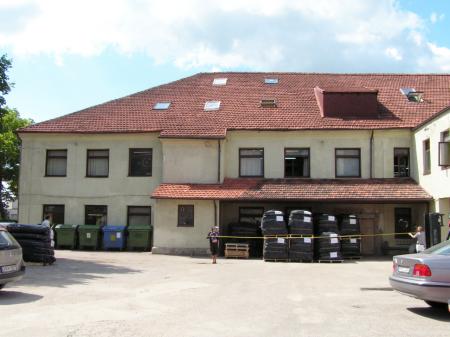 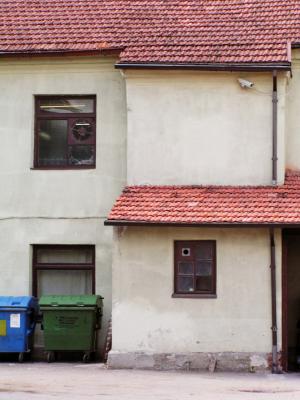 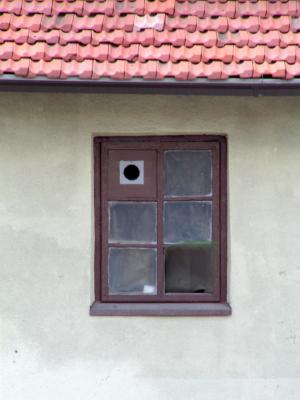 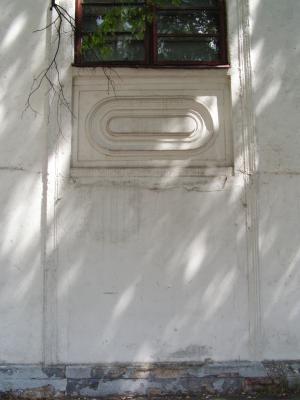