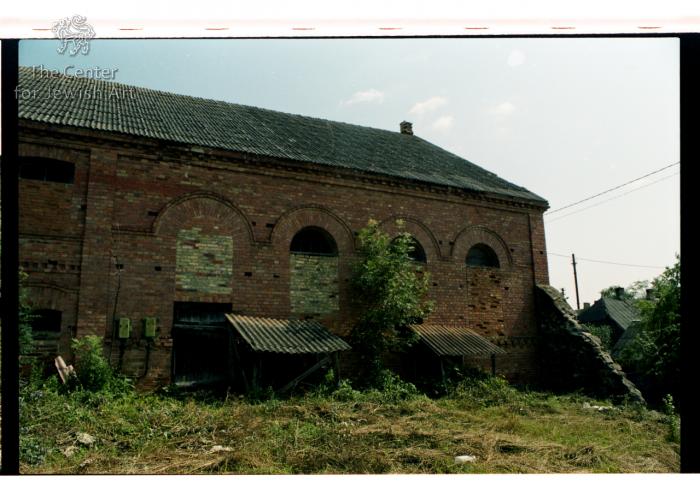 The synagogue was designed at the end of the 19th century, probably after the fires of 1887, by an unknown architect. The design shows a brick, plastered structure of rectangular ground plan under a gable roof. Two transverse walls divide the interior space into a staircase, two auxiliary rooms on the ground floor with the women’s section above them, and the prayer hall. Each side façade has three entrances leading respectively to the staircase, auxiliary premises and the prayer hall. Its twelve rectangular windows are arranged in groups of four in the northeastern, southeastern, and southwestern walls. In the center of the hall the square bimah is situated in between four pillars, while the Torah ark occupies the central pier of the southeastern wall. There are six rectangular windows in the women’s section, three in both northeastern and southwestern walls. A latticed partition separates it from the prayer hall.

The surviving building shows that the synagogue was more sumptuous than the design suggests. It is an unplastered red-brick structure, standing on a masonry socle, built in so-called “brick style”. It has and two sections and is covered with a gable roof of asbestos sheets. Its most elaborate, southeastern and northeastern facades, face Upės and Pakruojo Streets. The main entrance was probably situated on the southwestern side, in the two-storey part. The first-floor women’s section was apparently accessed through a wooden staircase on the northwestern façade, which is currently lost. A transverse wall divides the ground floor into two rooms: the northwestern one embraces the former auxiliary premises, while the southeastern one was a prayer hall. The width of the prayer hall (13.89 m) exceeds its length (11.32 m). Remains of a stove are discernable in the middle of the northwestern wall. In the Soviet period, the prayer hall was split into two floors by a wooden deck. The southeastern façade is symmetrical, with a boulder socle, and topped with a gable. The façade is framed with corner pilasters, and the central axis is marked by a lesene, indicating the interior placement of the Torah ark. The lesene is flanked by two pairs of round-headed windows, resting on a stringcourse with stepped modillions. Currently they are partially bricked and planked up. The window heads bear brick archivolts, which form a continuous molding. Depressed panels beneath the windows are decorated with rectilinear balusters. The gable has ranking and horizontal cornices. It is pierced with a central segment-headed niche flanked by two segment-headed windows. The windows and the niche rest on a stringcourse with stepped modillions and are surmounted with figured pediments. An oculus pierces the gable above the central niche.

The northeastern street façade is divided into two parts, corresponding to the auxiliary premises and the prayer hall. Pilasters divide the façade of the prayer hall into four bays, each containing a round-headed window with archivolt. The windows rest on a stringcourse with stepped modillions, under which are depressed panels with rectilinear balusters. In the two-storey part, six segment-headed openings are arranged in two tiers separated by a stringcourse. The windows of the ground floor are decorated with figured pediments. A dentiled cornice crowns the façade. Currently most of the façade is hidden behind a new annex of silicate brick; the windows are mostly bricked up, one of the roundheaded windows has been transformed into a door, while the westernmost window of the ground floor has been converted into a wide gateway. The southwestern façade is similar to the northeastern one, but less ornateIt is divided by a lesene into two parts, and there are no pilasters or depressed panels beneath the round-headed windows of the prayer hall. The westernmost opening on the ground floor used to be an entrance door. Currently, the windows are partially bricked up, while the westernmost window of the prayer hall has become a doorway. Two slanting masonry buttresses were added to the façade at a later time. The northwestern façade is currently covered by a wooden annex. It comprises at least two windows on the ground floor, three windows and a door on the first floor, and two segment-headed windows in the gable, one of which is still visible.

The interior of the synagogue was largely destroyed. However, four central plastered brick pillars have survived in the prayer hall. They stand on pedestals, are crowned with a molded cornice, and bear an interim stringcourse. The corners of the pillars are chamfered. These pillars support two longitudinal wooden beams, which bear the joisted ceiling which has replaced the original one. A wide round-headed niche with moulded archivolt, in which the Torah ark was placed, occupies the central pier of southeastern wall. The building is currently used for grain storage. 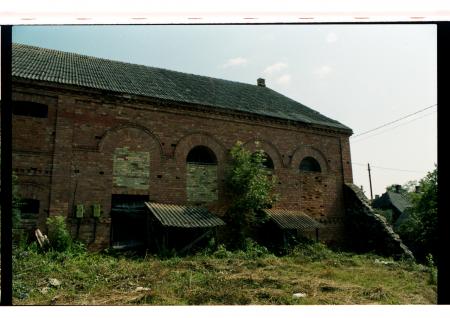 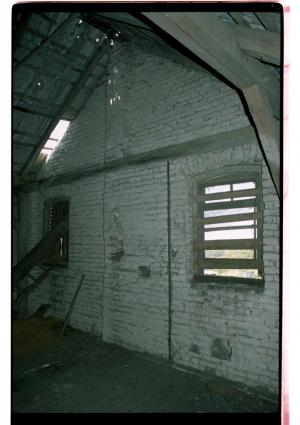 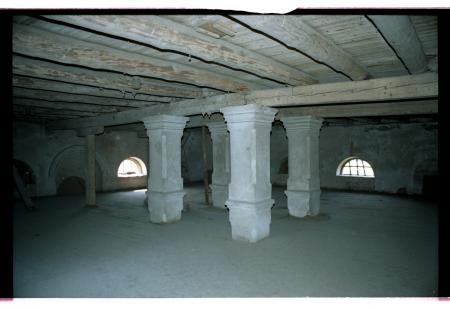 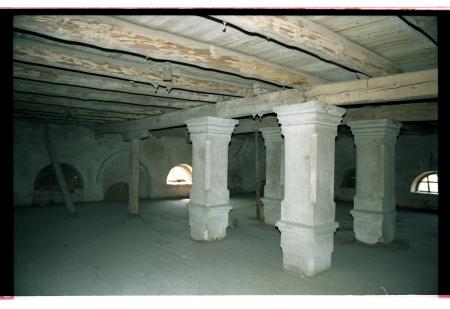 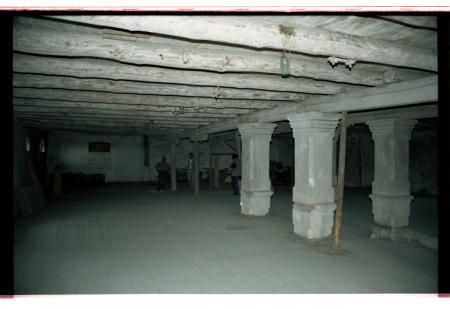 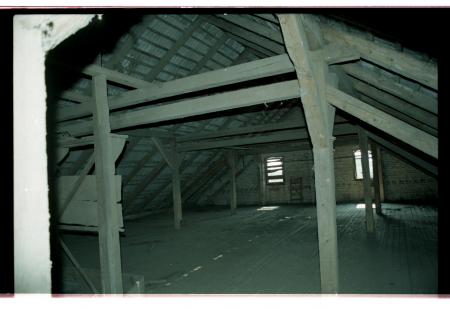 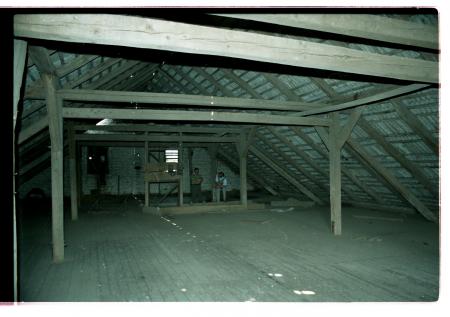