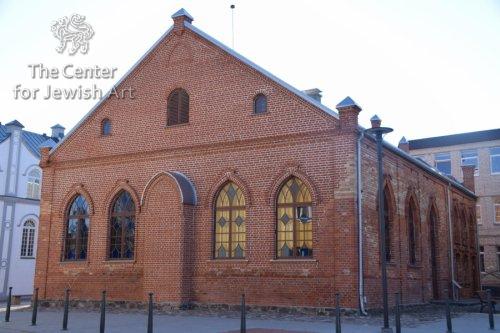 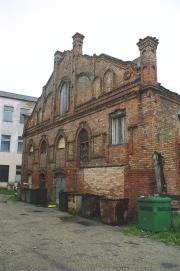 The “Red Synagogue” was built in the so-called “brick style” after the fire of 1911, which destroyed most of the previous building. It has a prayer hall in the eastern part and a two-storey western section is lower than the White Synagogue. The synagogue was built of red brick, not plastered, and covered with a tin gable roof. Its ground plan is rectangular, with a small rectangular protrusion for the Torah ark on the eastern side. The western part included a vestibule with a staircase leading to the women’s section on the upper floor, while the eastern part housed an almost square prayer hall, lit by ten windows and devoid of any interior supports. On December 14, 2007, the entire eastern part of the building collapsed; the description below refers to the situation before it caved in.

The two-storey western façade is the most sumptuous, crowned with an elaborately shaped gable. The corners of the façade are emphasized by lesenes; the openings of the ground floor are segment-headed, and those of the upper floor are pointed, like the central window of the gable. All openings have molded brick frames, those on the ground floor overhung with segmented pediments, while the façade windows are interceded with brickwork panels. The upper floor is crowned with a dentiled cornice, which runs around the building. Paneled lesenes divide the gable into five bays and terminate in turrets. The central bay includes a pointed window and a brickwork Star of David above it; dentiled half-arched brick courses bend towards the façade’s center in the adjacent bays, and blind and framed biforia and oculi are set up in the lateral bays of the gable.The southern and northern side façades are divided by lesenes into four bays: the larger western bay is similar to the western façade and has segment-headed openings on the ground floor and pointed windows on the upper floor. The three eastern bays match the former prayer hall. Each bay includes a large pointed window in a molded brick framing. The openings of the western bay are segment-headed on the ground floor, and pointed on the upper floor, like those of the western façade. Each of the three eastern bays includes a large pointed window, retained in a molded brick framing. Most of these openings were reconstructed or bricked up after WWII.

The eastern façade was surmounted with a triangular gable. The corners of the façade were emphasized by lesenes, its center was accentuated by a rectangular protrusion reaching the height of the windows. Four pointed windows, similar to other windows of the prayer hall, flank the protrusion, which was spanned by a pointed vault under a tin roof. The gable was pierced with lateral segment-headed windows; a lower round-headed and a pointed upper niche marked its axis. A doorway was cut through the protrusion in the postwar period.

The interior of the prayer hall was still partially preserved in 2007. The Torah ark was in the center of the eastern wall, occupying the rectangular niche. The ark was flanked by pairs of half-columns, which bore a pointed pediment with two lateral finials. The Star of David, which once decorated the pediment, was damaged deliberately. The ark was plastered and painted green and ochre. Plastered and painted round-headed Tablets of the Law were placed on both sides of the ark. Besides the abbreviated Hebrew text of the commandments, they bore the inscriptions לוחות (tablets) on the right, and הברית (of the law) on the left. The walls of the prayer hall, its ceiling and alcoves were decorated with stencil paintings and stucco. The piers between the windows were painted as fluted Ionic pilasters, the wall frieze imitated festoons, and stucco alcoves were painted dark green. The ceiling included a central rosette and eight paterae painted in tints of green and surrounded with paintings with a predominant rose motif. Traces of the central octagonal bimah were discernable on the floor of the prayer hall. The ceiling of the women’s section was also decorated with plaster rosettes and the walls were surrounded by a molded cornice. After WWII, the former women’s section was spanned with a ferroconcrete ceiling that covered and concealed the original.

In the Soviet period the Red Synagogue was used for storage and later converted into a foundry with an apartment in the women’s section. In the 1970s the former synagogue housed a youth club. The building’s plan was altered; nevertheless, the façades remained almost unchanged, and the Torah ark and the details of interior painting were still extant. In 2007 the building lacked proper roofing; the western part was used as a temporary storage space. In 2008 plans were made for restoring the collapsed walls. 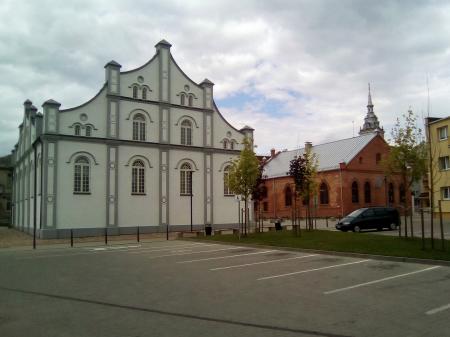