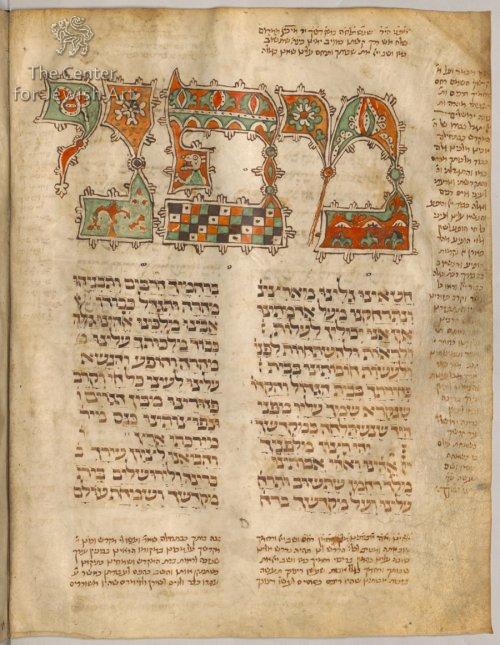 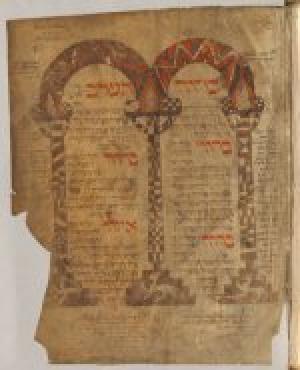 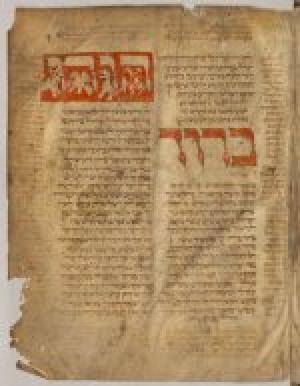 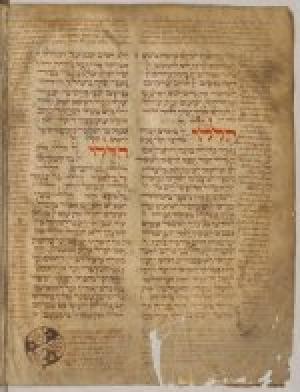 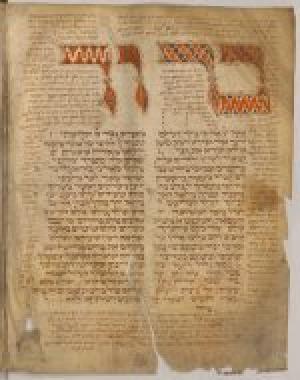 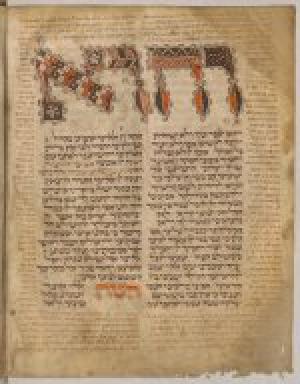 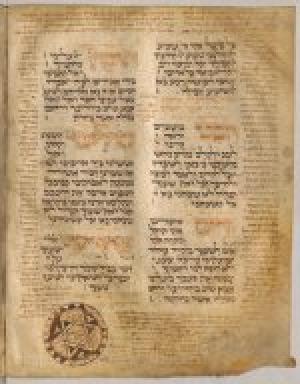 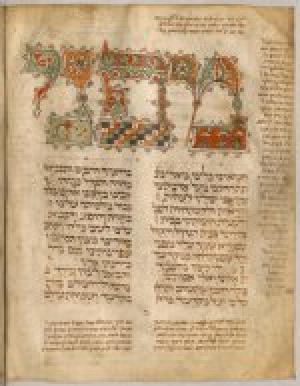 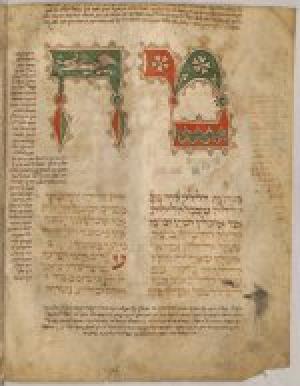 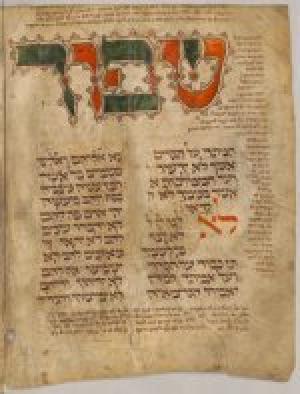 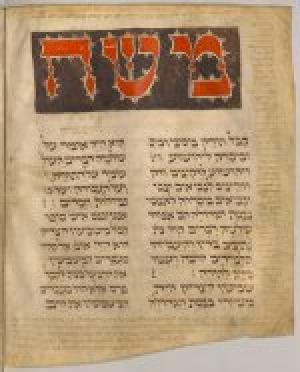 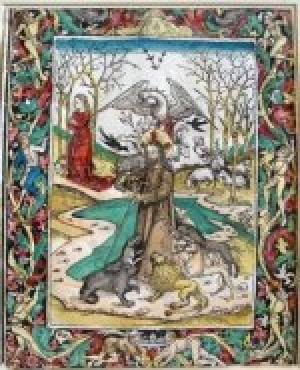 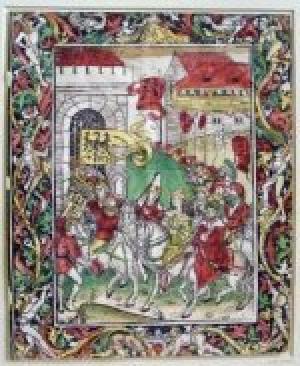 15th-century binding on wooden boards (321 x247 mm.); the spine and a quarter part (65 mm) of each board are covered with white pigskin decorated with a stamped chain of floral ornament. The spine has three double cords and a head band, the tail band is missing. Holes and remains of nails situated along the upper and lower edges of the front cover denote the place of two lost clasps. They correspond to the indented squares on the back cover where straps were attached.

The main decoration is found in the Siddur and done by Scribe A. It consists of a full-page double arcade and decorated initial words and catchwords. They are mostly coloured in brown ink, red and green

and spared-ground technique, decorated with wrigglework, animals and foliage motifs and a chequered pattern.

The mutilated manuscript is composed of two different codicological, palaeographical and textual units.

The first, vellum, unit is a Siddur and Haggadah copied by Scribes A, B and C (fols. 1-107). The second, sheepskin, unit is a Mahzor copied by Scribes D (fols. 108-117v) and E (fols. 118-203). The codicological features of the Mahzor, such as ruling by stylus, although without pricking in the inner margin, might point to a somewhat earlier date than the ruling in plummet with pricking in the inner margin of the Siddur

and C of the later Siddur unit added annotations to the earlier Mahzor.

According to Goldschmidt this manuscript, especially the Mahzor, although lacking a great deal from the morning service until the end of the musaf for the Day of Atonement, is the oldest and most important source of the eastern Ashkenazi rite. This manuscript was used for collating variants in Goldschmidt, Mahzor for Rosh Hashana (Goldschmidt 1970, I:53).

The custom of reciting the Torah blessings before the morning prayers (fol. 1) is a clear indication of the east European rite, whereas in the western Ashkenazi communities it is read later, before Parashat Tamid (Goldschmidt 1970, I:28; Y. and A. Fraenkel 2008:7). Another indication of the eastern rite is the recitation of the piyyut (silluq) ונתנה תוקף in the musaf of both New Year and the Day of Atonement, whereas in western practice it is recited only on New Year. This is the case, for example, in the Nuremberg Mahzor of 1331, one of the three largest Ashkenazi mahzorim (the others are the Worms Mahzor and the Amsterdam Mahzor), which represent the eastern Ashkenazi–Austrian rite. Nevertheless, for some reason, the silluq in our mahzor appears only once, in the New Year musaf.

There is also an inconsistency in the morning service for the Shabbat of Circumcision, which in the Nuremberg Mahzor as well as in our mahzor runs according to the western Ashkenazi rather than the eastern rite (Y. and A. Fraenkel 2008:80, notes 448 and 449).

Another outstanding example is the order for blowing the horn in the musaf for the first and second days of New Year (fols. 147 and 156v - תקיעה שברים תקיעה) which is a western Ashkenazi custom, whereas in Poland (and France) the order is in accordance with Rabbenu Tam (תקיעה שברים תרועה תקיעה; Goldschmidt 1970, I:259). These inconsistencies perhaps occur because the prayer books of the eastern practice only became fixed when they were printed during the 16th century, not earlier.

Only the first unit containing the Siddur is decorated. The double arcade (fol. 1) resembles that of a Mahzor produced in 1279 apparently inBamberg(fig. 2). In both manuscripts the arcade is decorated with a geometrical pattern, juxtaposing elements coloured in ink with others in spared-ground technique. A special affinity is evident in the three spared-ground lions passant decorating the bases of the columns in our manuscript and those decorating the capitals of columns in the Bamberg Mahzor, and the bases of the latter with a decorated catchword in ours (fig. 3). The juxtaposition of elements executed in ink and those in spared-ground technique is the main characteristic of Franconian scribal art, which is found in many other manuscripts from this region from the late 13th to the early 14th century (Cohen-Mushlin 1985:92).

Another example is the Munich High Holidays and Sukkot Mahzor, which shows the general type of decoration also prevalent in our manuscript (cf. figs. 4 and 5). The variety of simple elements drawn by scribes, not always with a dexterous hand, nevertheless enrich the initial words with their different combinations, whether executed in colour, brown ink, spared-ground or all three. Thus the rich initial word in our mahzor is comparable to that in another of c.1270, although the scribes used different motifs (cf. figs. 6 and 7). We may conclude that our mahzor was produced at the end of the 13th or the early 14th century, in the region ofFranconia.

Two flyleaves at the beginning and end of the manuscript, today in the Staatliche Graphische Sammlung (Inv. No. 171526, Inv. No. 171523), are coloured woodcuts which originally appeared in the Schatzbehalter der wahren Reichtümer des Heils (Treasure Chest of the True Riches of Salvation), written by the Franciscan preacher Stephan Fridolin (1430-98). The woodcuts were executed by the workshop of Michael Wolgemut and Wilhelm Pleydenwurff  and published in 1491 by Anton Korberger inNuremberg