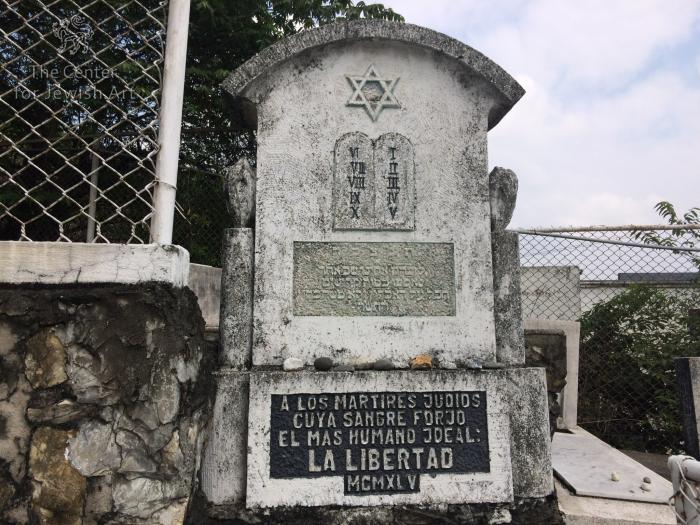 This monument was erected in 1943/44 or 1945, inside the Jewish section of the Monumental Municipal Cemetery of Guayaquil. The simple monument, made from stone, was erected by the city’s Jewish Community, which at the time was mainly composed of Jewish refugees who fled Europe since the first half of the 1930s.

The round-top stele inscribed with Hebrew and Aramaic is decorated with the Tablets of the Law (featuring Roman numbers) surmounted by the Magen David. The stele is flanked by two kindled candles most probably symbolizing eternal light and put on the base inscribed in Spanish.

The inscription in Hebrew and Aramaic reads:

The inscription in Spanish reads:

Translation: To the Jewish martyrs whose blood forged the most human ideal: freedom. MCMXLV [1945] 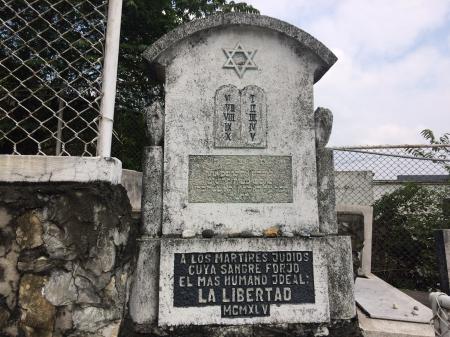 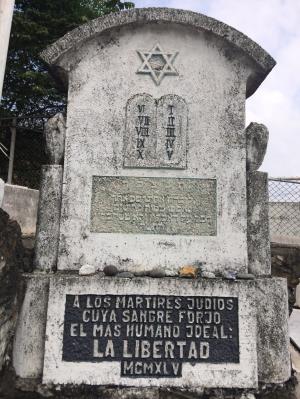 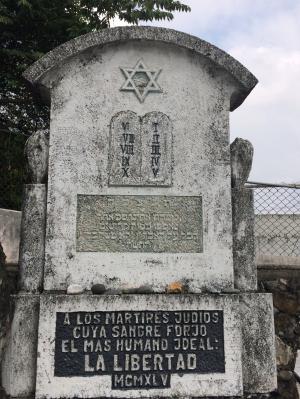 Until 1906, the Ecuadorian Constitution declared Roman Catholicism as the only religion of the state. Therefore, in order to immigrate to the country and acquire citizenship, being Catholic was the main requisite. It was only after 1914, when the Panama Canal was inaugurated, that Ecuador began witnessing European immigration on a large scale. According to the government’s official data, only four Jewish families were living in Ecuador in 1904. Even in 1917, a total of only 14 people of the Jewish religion were known to be living in the country.

According to the Israeli historian Haim Avni, between 1933 and 1945, Ecuador hosted 3.200 European Jewish refugees, mostly coming from Germany, Austria, Czechoslovakia, and Italy.

It seems that the monument was erected already in 1943 or 1944 making it one of the earliest Holocaust memorials in the world.