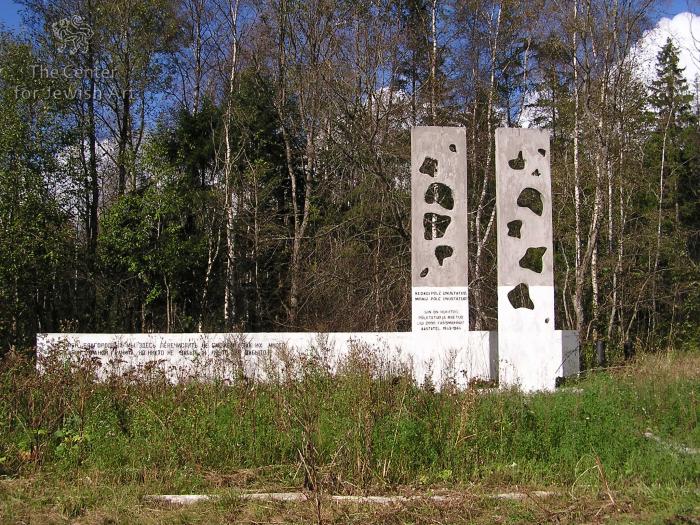 The original monument is an impressive concrete structure consisting of a long low wall as a horizontal element, from which two tall rectangular concrete slabs rise vertically in front of the right side. These vertical elements are pierced with “windows” in biomorphic shapes. A Russian inscription is recessed on the horizontal element, and an inscription in Estonian is recessed at the bottom of one of the vertical slabs. The monument is entirely architectural and abstract with no representational imagery or recognizable symbols.

In front of the old monument, a new granite plaque was installed in 2005.

On the 1967 monument is inscribed in Russian and Estonian.

The inscription in Russian is a paraphrase of a short poem written by the poetess Olga Berggolts in 1959 for the memorial to the victims of the Siege of Leningrad and reads:

Translation: Noble names cannot be named here: too many of them / are under the eternal watch of granite. But no one and nothing will ever be forgotten!

The inscription in Estonian reads:

Translation: No one is forgotten. Nothing is forgotten! At this site more than 2,000 victims of fascism were executed, burnt and buried in 1943-1944.

The 2005 memorial is inscribed in Hebrew, Estonian, and English:

Translation: To the memory of the victims of Shoah

The inscription in Estonian reads:

Translation: In memory of the victims of the Holocaust. In the years 1941–1944, the occupation authorities set up 20 labor and concentration camps in Estonia, thousands of people from a number of countries were killed in those camps because they were Jewish. The Erede concentration camp was located here.

The inscription in English reads:

IN MEMORY OF THE VICTIMS
OF THE HOLOCAUST

Between 1941 and 1944, the German occupying powers
established 20 labour and concentration camps in Estonia.
Thousands of people from a number of countries
were killed in those camps because they were Jewish.
This is the site of the
Erede concentration camp.

The Jewish Community of Estonia (2005 monument), sponsored by the United States Commission for the Preservation of America’s Heritage Abroad, the Holocaust Education Trust, the National Fund of the Republic of Austria for Victims of National Socialism and the Estonia Ministry of Culture 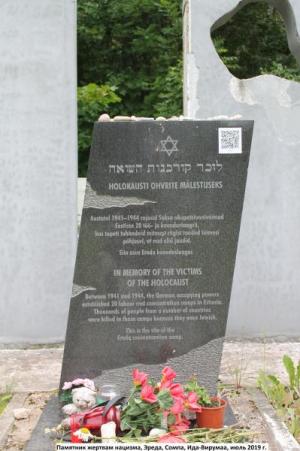 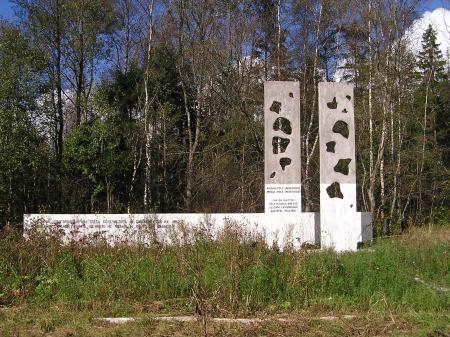 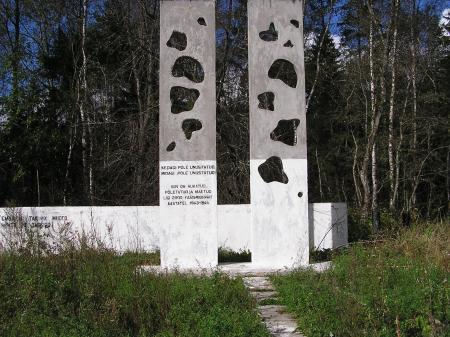 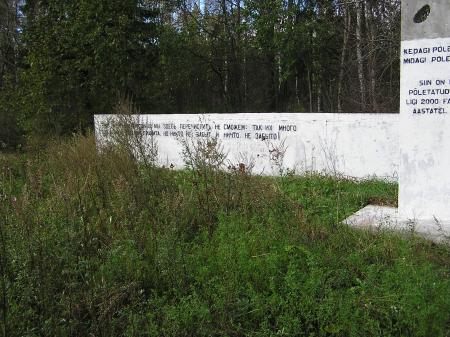 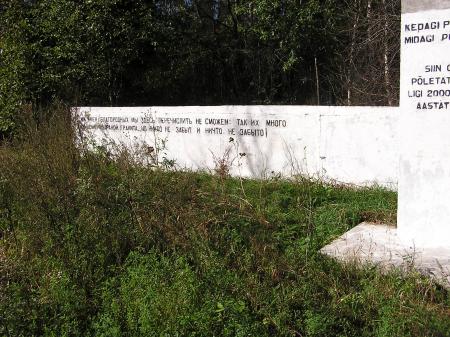 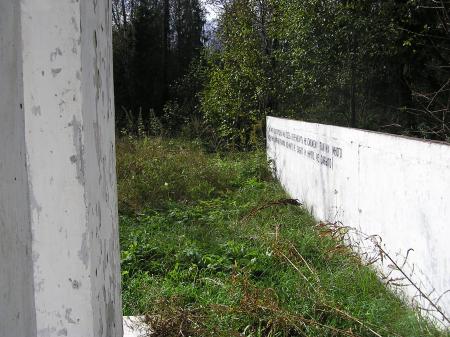 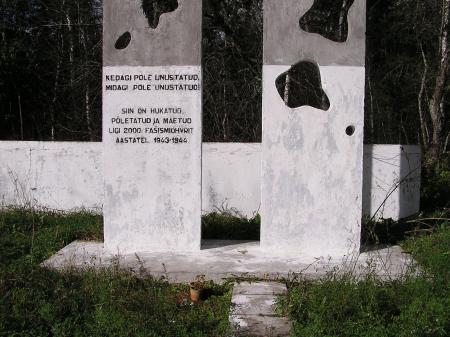 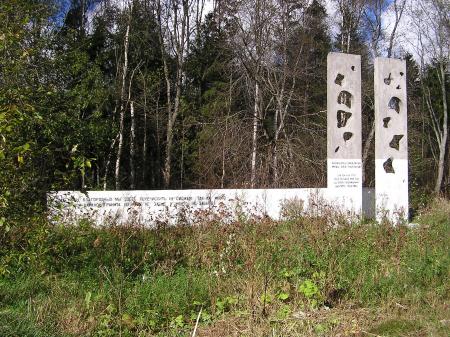 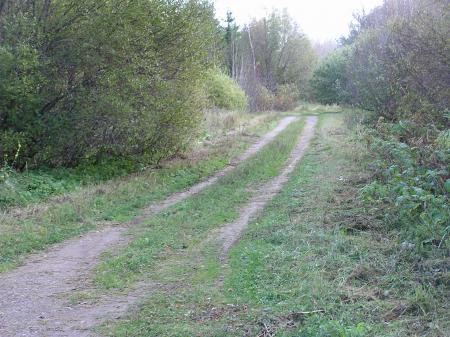 From Autumn 1942, tens of thousands of Jews were transported to Estonia from other areas under Nazi rule, including Terezin (Theresienstadt), the Lithuanian ghettos of Vilna (now Vilnius) and Kovno (now Kaunus), Bistriţa in Transylvania, and the Kaiserwald camp in Latvia. They were held at about twenty concentration, transit, and labor camps, mostly in the county of Ida-Viru in north-east Estonia, and forced to mine oil shale for the production of fuel, as well as to dig antitank ditches, build bunkers, and perform other military work. The main camp was at Vaivara, through which some 20,000 Jews passed; a further 1,300 people, mostly Jewish, were kept captive there. When prisoners weakened and could no longer work, many of them were killed; others died of disease, hunger, and torture.

Ereda and five other sites (Kalevi-Liiva, Klooga, Kiviõli, Illuka and Sinimäe), were marked with Holocaust memorials during the Soviet era; however, these were not very specific or even accurate in the information they gave.

In 1967, a memorial to the approximately 2,000 victims of the Ereda labour camp was erected in Ereda. Local Soviet authorities commissioned Estonian architect Peeter Somelar to design a monument to the “victims of fascism” in Ereda.

Beginning in 2003, there has been an ongoing project to place new commemorative markers at concentration and labor camp sites. Some of these replace misleading Soviet-era monuments, others are new. This project, an initiative of the Jewish Community of Estonia, has been sponsored by the United States Commission for the Preservation of America’s Heritage Abroad, the Holocaust Education Trust, the National Fund of the Republic of Austria for Victims of National Socialism, and the Estonia Ministry of Culture. Five monuments, at Ereda, Kiviõli, Klooga, Illuka, Metsakmistu and Vaivara, were dedicated in 2005.

The new monument at Ereda is placed in front of the earlier one. It is a granite plaque on which is engraved a Magen David, a passage in Hebrew, and text in Estonian and English. There is some difference in the texts. The English version mentions the German occupation forces, but the Estonian one does not, leading to the possible impression that the camps and deaths were due to Russians. The new monument does, however, specifically refer to Jews. The number of Jewish victims is left vague, even though, most of the 2,000 victims are believed to have been Jewish prisoners.

Each year, commemorative ceremonies in honor of the victims are held on January 27, on May 8/9, and on September 19. In addition, the Jewish community of the Ida-Viru district organizes lectures and seminars on the Holocaust, with an emphasis on the history of the region.