The tas is made of gilded silver. The rectangular plate has an arched top.

The plate is decorated with two tapering, cylindrical columns with spiralling folliage, rising over rectangular pedestals with a corolla motif. The columnns' foliate capitals are surmounted by lions looking frontwards.They support a crown. Bellow the crown is a medaillion. In the medaillion and on both side of it, is an inscription in outline letters, and reads: שויתי % ה' % לנגדי ##תמיד "Ps. 16:8" Bellow the medaillion is a flower basket. A band of flowers encircles the plate.

Above the crown is a dedicatory inscription which is engraved in filled outline letters, and reads: מתנת ר' שמעיה ארי" ווייסענבעעק ואשתו ## לכבוד המקום ולכבוד התורה מן הספר והציץ הזאת. " A gift of Rabbi Shma'aia Arie (int.) Weissenbak and his wife## In honour of the Lord and in honour of the Torah from this book and this ziz (tas)"

This one of very few Torah Shields to use the Shivit formula as a central theme. The workmanship on this shield is extremely fine as is the lettering of the inscription above. There are holes all around the circumfrance of the silver, indicating that this may have been sewn to a Torah Mantle.

Inscription: The Gift of Reb Shemaya Aryeh Weissen Berg and His Wife, for the Honor of God and for the Honor of the Torah, This Scroll and This Torah Shield (Tzitz) I Have Set the Lord Always Before Me (Psalms 16:8) 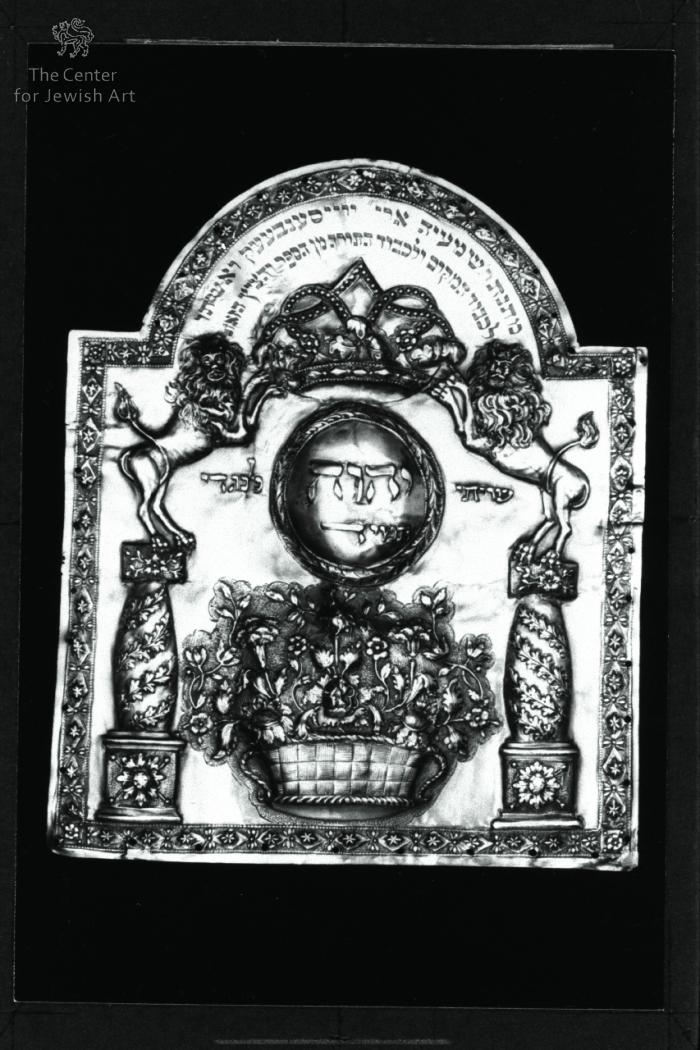