This lamp is one of the earliest silver lamps existing with its origin in Warsaw, Poland. Since the production of silver Judaica appears to have begun only just before the second half of the 19th century, this example would be among the earliest Jewish objects made in that city. Its form is very much related to similar lamps made in the Habsburg lands. The use of the griffins rampant alongside the Menorah is very reminiscent of similar symbols in Galicia, the place from which many of the Jews of Warsaw originated and who may have requested such symbols known to them. In the crown at the apex of the lamp is incribed the letters Chaf/Shin/Tet --- Keter Shem Tov, the most important of the famous four crowns in Jewish tradition. The holders for the wicks are of a Central European style; afterwards the typical Warsaw lamp has an almost standard oil receptacle in the shape of small cup containers. Inscription: Chaf/Shin/Tet --- Keter Shem Tov 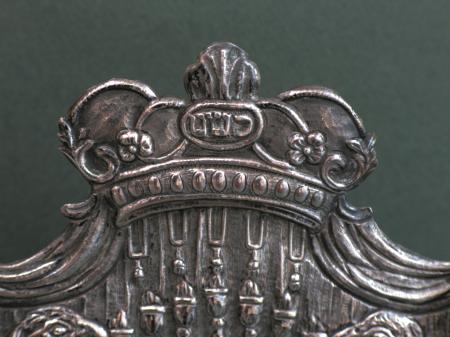