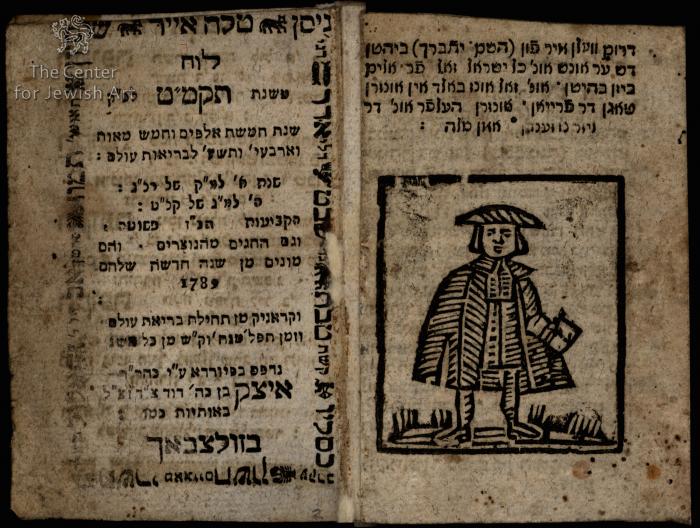 The Hebrew or Jewish calendar (הַלּוּחַ הָעִבְרִי, ha'luach ha'ivri) is a lunisolar calendar used today predominantly for Jewish religious observances. It determines the dates for Jewish holidays and the appropriate public reading of Torah portions, yahrzeits (dates to commemorate the death of a relative), and daily Psalm readings, among many ceremonial uses. In Israel, it is used for religious purposes, provides a time frame for agriculture and is an official calendar for civil purposes, although the latter usage has been steadily declining in favor of the Gregorian calendar.
The present Hebrew calendar is the product of evolution, including a Babylonian influence. Until the Tannaitic period (approximately 10–220 CE) the calendar employed a new crescent moon, with an additional month normally added every two or three years to correct for the difference between twelve lunar months and the solar year. When to add it was based on observation of natural agriculture-related events. Through the Amoraic period (200–500 CE) and into the Geonic period, this system was gradually displaced by the mathematical rules used today. The principles and rules were fully codified by Maimonides in the Mishneh Torah in the 12th century. Maimonides' work also replaced counting "years since the destruction of the Temple" with the modern creation-era Anno Mundi.
The Hebrew lunar year is about eleven days shorter than the solar cycle and uses the 19-year Metonic cycle to bring it into line with the solar cycle, with the addition of an intercalary month every two or three years, for a total of seven times per 19 years. Even with this intercalation, the average Hebrew calendar year is longer by about 6 minutes and 40 seconds than the current mean solar year, so that every 217 years the Hebrew calendar will fall a day behind the current mean solar year; and about every 231 years it will fall a day behind the Gregorian calendar year.
The calendar is central to daily Jewish life. Events, ceremonies, rituals and prayers are all determined by the monthly lunar cycle. Therefore calendars are an essential aspect of Jewish life and have long been calculated and produced, as evidenced by the large number of Hebrew books and manuscripts dealing with this cycle and its accurate determination, as well as the number of manuscript and printed calendars that have been produced every year in both wall and booklet form. The advent of printing naturally increased both the number of calendars made and the wide-spread nature of distribution. Yearly calendars are by nature ephemera and are usually discarded after use.
The accurate recording of dates and times is essential to the practice of the jewish religion. Calendars with dates of important events in the Jewish cycle were printed often. But, as yearly calendars are a prime sort of ephemera and were discarded after their usefulness ended every year, early examples are quite rare.

This pocket calendar was printed in Fuerth in Bavaria and was preserved in the genizah (the place in the synagogue that objects with Hebrew letters, which were considered holy, were preserved for burial) of Westheim, another town in the area. The city mentioned on the title page as the place of printing is Sulzbach even though the printing was done in Fuerth. This is a known phenomenon in Hebrew printing, apparently to put on the title page places that had a greater meaning for quality printing that the actual place where the printing was executed. The printer used a woodcut illustration to decorate the calendar that also appears one of the aleph-bet school charts exhibited here. When a printer wanted to fill an otherwise empty space, he used whatever woodblock that came to hand, often resulting in the same illustrations adorning a number of different printed objects. 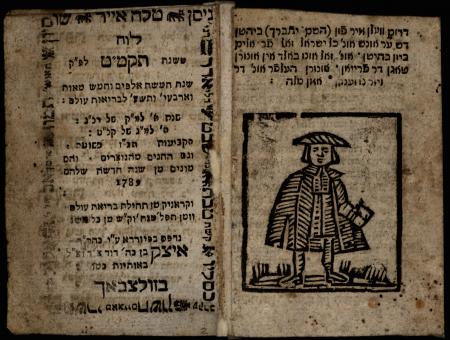 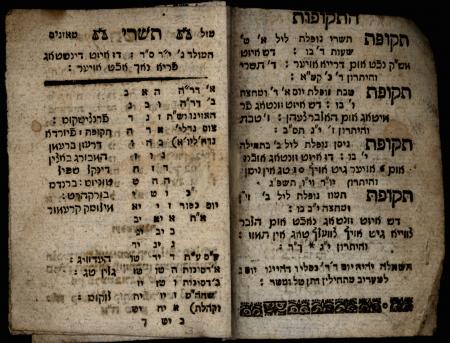 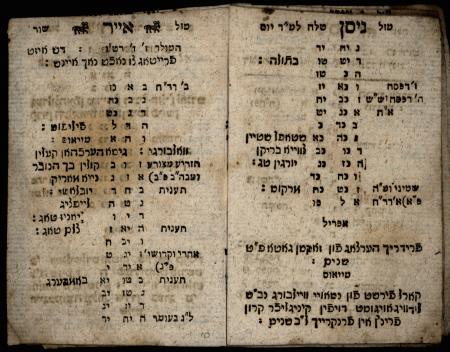 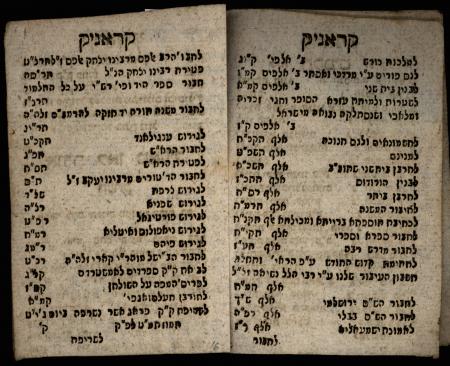 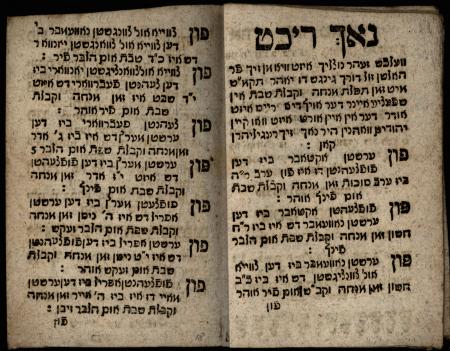 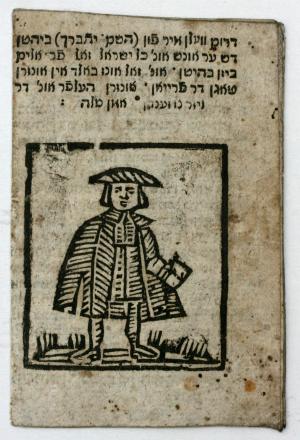