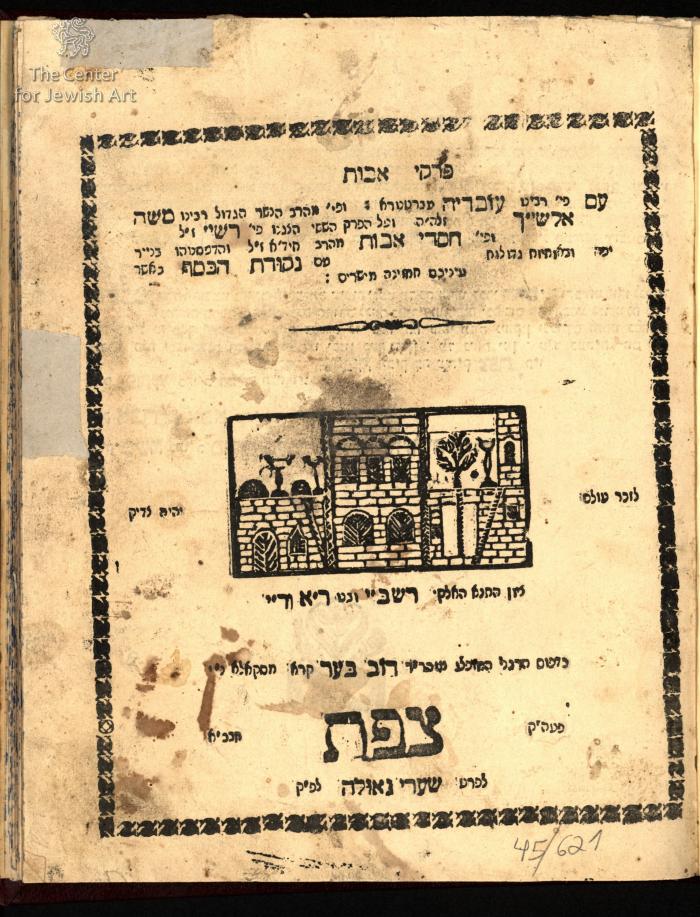 Pirkei Avot, vowelized, with commentaries of Rabbi Ovadya of Bartenura and Rabbeinu Moshe Alshich. Rashi commentary and Chasdei Avot by the Chida on the sixth chapter. Safed, [1865]. Printed by Dov Ber Kara.
Title page contains illustration of the grave of Rabbi Shimon Bar Yochai in Meron and “his sons Rabbi Elazar and Rabbi Yochanan”.On the last page is a list of subscribers "People who paid in advance for this book".
This book is from the third incarnation of printers in Safed. The first in the 16th century, the second by Bak in the 1830's before he moved to Jerusalem, and then this period of the 1860's. In 1863 the printing press in Safed was reopened after being out of operation for approx. twenty six years. It continued to operate until 1866; only nine books were printed in the printing press.
Pirkei Avot that was Printed in Safed in 1865 – with the Commentary by the Holy Alsheich, One of the Dayanim of Safed and Head of Yeshiva! The text of the Mishnayot is vowelized. Printed around it are the commentaries by Rabbi Ovadya of Bartenura and the Holy Alsheich, who lived in Safed where he taught and wrote his doctrine! Very important edition! Printed on the last page is a list of the "people who gave down payment on the book" – a list of great importance for scholars researching the history of the Yishuv in Safed. Among the rabbis referred to by the list are the rabbis of the town and its activists, headed by the mythological of the town, Rabbi Shmuel Heller.The rare printing house in SafedThe book before us was printed at the printing house of Rabbi Dov Ber Kara of Skala. Two workers of the printing house are mentioned by the colophon of the book: Eliezer Neta Ben Yitzchak Sofer and Mordechai Ben Shmuel. Today, books by this printing house are extremely rare since less than ten books were printed by it until it closed. The adornment of the book was very important to the owners of the printing house and in the center of the title page, an impressive illustration was printed "The grave site of the Divine Tana Rashbi and his son" – since Safed was the nearest city to the grave site. Other books printed by this printing house also included the impressive illustration. To the best of our knowledge, this is the last book that was printed by this printing house. After it closed, for ten years books were not printed in Safed and only in 1876, the printing of books was renewed by other printers 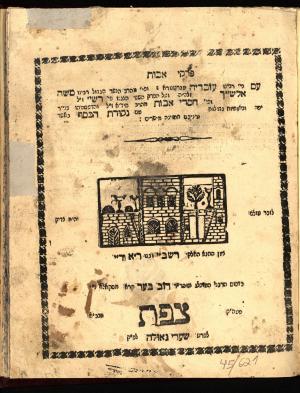