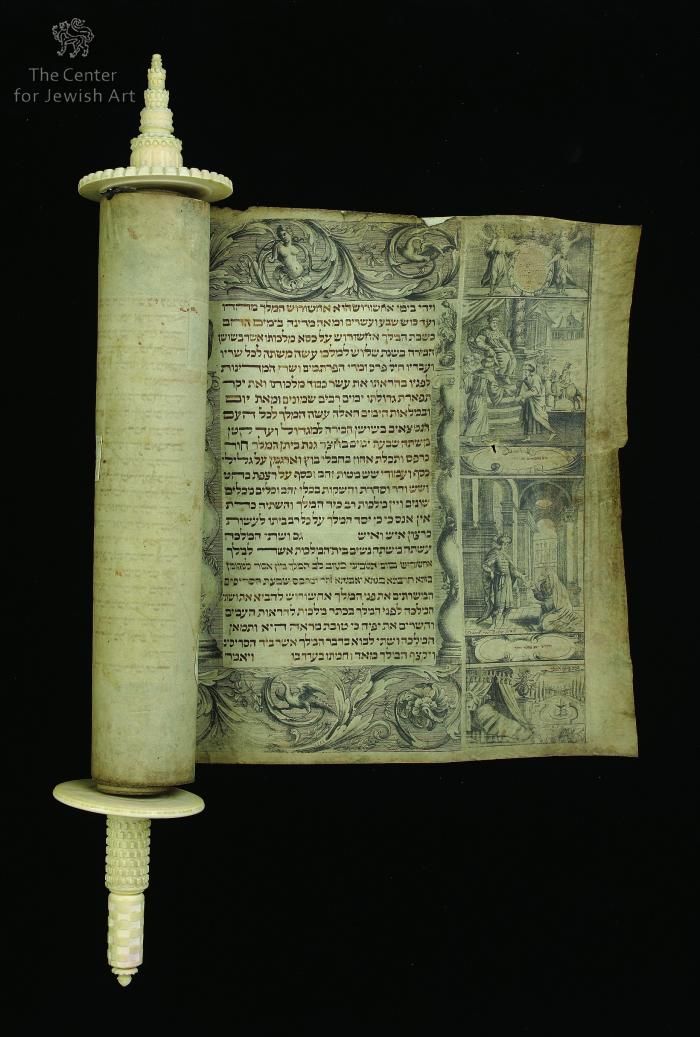 It starts with a panel composed of a crown-topped cartouche, supported by two standing angels and three scenes from the Book of Esther placed one under the other. Elongated cartouches for the Hebrew inscriptions are added to the scenes. The illustrations are labeled, but their wording is not the same in all surviving versions of this type of megillah. Additionally, there is an inscription in the lower-left corner of the 2nd illustration in the Latin alphabet (see "Signature").

The text of the megillah is inscribed in rectangular panels separated by twisted columns. Just above each column are flower-filled vases and narrative scenes from the Purim story: 1) King Ahasuerus with his scepter (possibly alluding to Es. 1:1); 2) Seven maidservants of Esther (Es. 2:9); 3) Queen Esther with her scepter; 4) Bigthan and Teresh hanging on the gallows (Es. 2:23); 5) The king giving his ring to Haman (Es. 3:10); 6) Mordecai with an open book before Haman (it is unclear what part of the text this scene represents); 7) Haman pleading with Esther for mercy (Es. 7:7–8); 8) Mordecai on horseback (alluding to Es. 6:11); 9) Queen Esther with her scepter; 10) Esther writing the Purim letter (Es. 9:29); 11) The king giving his ring to Mordechai (Es. 8:2); 12) Esther in front of Haman's house (Es. 8:1 (?)). These scenes are also labeled in Hebrew, though their sequence is not the same in all preserved examples of this type of scroll.

Four other narrative scenes from the Book of Esther are printed one under the other in the final section of the scroll. They are as follows: 1) Possibly the first Purim feast (Es. 9:17-23); 2) Esther’s second banquet (Es. 7:3); with the gallows built for Mordechai in the background (Es. 5:14); 3) Queen Esther before the king while he extends his scepter to her, and Mordechai kneeling in front of him while becoming the new royal vizier and receiving Ahasuerus's ring (Es. 8:2-4); 4) Mordecai writing the Purim letter (Es. 9:29). In the scenes, elongated cartouches for inscriptions are incorporated.

The scroll is mounted on a roller with ivory finials.

Around 15 megillot featuring the same border are housed in private and institutional collections. Yet another exemplar used to be a part of the Gross Family Collection (no. 081.012.044) but in 2003, it was stolen from the Beit Hatfutsot Museum in Tel Aviv (Hilfe erbeten: Judaica Diebstahl: http://www.judentum.net; accessed on 14.12.2018). There are also two scrolls embellished with the same border but with texts other than the Book of Esther. 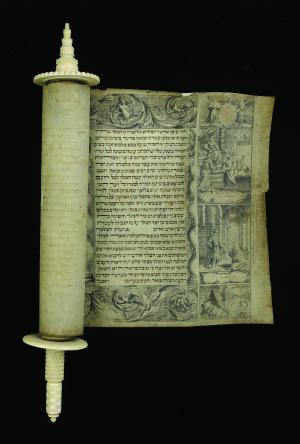 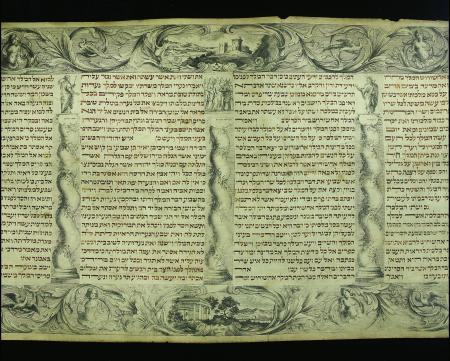 The scroll is formed of 4 sheets containing 16 columns of text with 24 lines, except for col. 14 which has 17 lines (11 of them - containing the names of Haman's sons - are divided into two parts).

The text is written in Hebrew square Ashkenazi script, in dark brown ink, on the flesh side of each parchment membrane. Not all of them are made of the same parchment, e.g. the 4th sheet is thicker than the 3rd. The sheets are rather suede.

The letters ח (Es. 1:6) and ת (Es. 9:29) are slightly larger than an average letter in the scroll. Other enlarged and diminished letters are included in col. 14.

The letter ח is represented in two different forms.

The letters of the Tetragrammaton are marked by a small tendril bent to the right.

The ruling is made with a stylus along with the sheets.

The membranes in the scroll are stitched together but only nos. 2-4; the first membrane is separated from the rest of the scroll.

In the upper part of the opening decoration, there is a cartouche supported by a pair of angels that in this scroll is filled with an inscription in Hebrew: זה שייך להיק נערה בבה ריב בן כמר ישראל

The manuscript is preserved in fair condition; this is partly caused by a lower printing quality (some parts of the pattern are printed very poorly, e.g. on the 3rd sheet).

The first membrane is not sewn with the rest of the scroll.