In the Ashkenazi and Sephardi tradition, the Torah Scroll is protected when not being read by a textile covering, often very beautifully embroidered. In the Mizrachi and Romaniote traditions, the Sefer Torah is generally not robed in a mantle but rather housed in an ornamental wooden case which protects the scroll, called a "tik".

One of the most beautiful of ritual objects and certainly among the most impressive is the Torah Tik as created by Jewish craftsmen in Iraq. This example, decorated is a delicate repetitive design, has a dedication inscription both on a gilt metal band around the top of the round body and on the glass inside as well. This Tik is also designed with particularly elegant proportions. There exist different decorative designs on Tiks in surviving examples. The onion-shaped dome differentiates the Iraqi Tik from other Tiks in use by communities in the Middle East and North Africa. This domed style traveled with the Iraqi Jewish merchants to other areas such as India, Burma, and China. Surviving examples of these Tiks cover a period of some 160 years. This Tik was dedicated by a father in memory of his son.

Around the top rim of the Tik: This Tik and the Torah scroll within were dedicated by the sons of their deceased father David Reuven David Menahem, may his soul be bound in the bond of life, the year 1847.

On the panels inside: This Tik and the Torah scroll within were made by the sons of their deceased father David Reuven David Menahem, may his soul be bound in the bond of life. 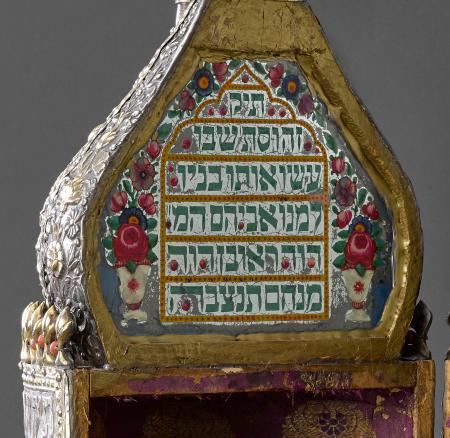 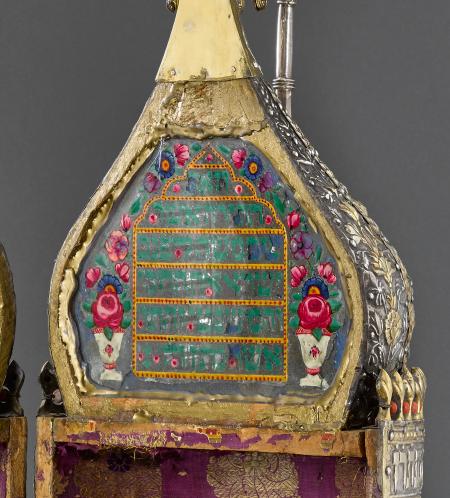