Plaques were often made for wooden Tikim for the Sefer Torah to record the donor and the date. The ornament consists of two plates which separate and meet when the case is opened and closed. Two horseshoe gates with inscriptions are engraved on the plates. On the upper part a Hamsa with three fingers pointing upwards while the thumb and the pinkie are pointing outwards. Two fish, facing each other, on the lower part. Verses are inscribed on the plates.

In this case, as in one other from Libya in the Gross Family Collection, an amuletic element was added for the protection of the Kehillah to whom the Torah belonged. In this case the amulet elements were the hamsa and the fish, the one a protection against the "evil eye" and the second a blessing for plenty and fertility. 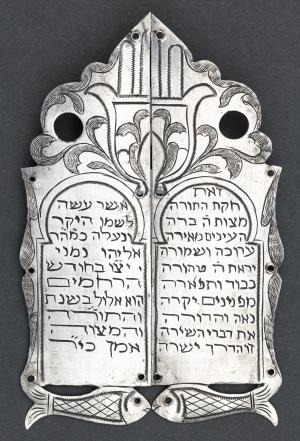