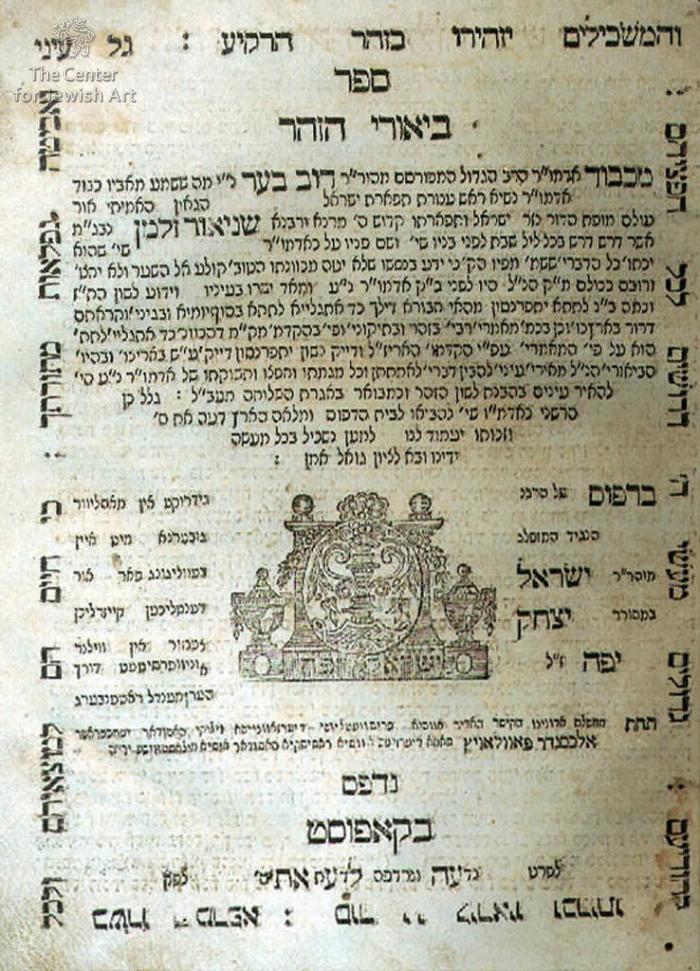 Be'urei HaZohar, by Rebbe Shneur Zalman of Liadi (Ba'al HaTanya). Printed by Rabbi Yisrael Yaffe. First edition. One of the first books of Chassidic articles with the teachings of the Admor HaZaken, printed after his death in 1813. "Be'urei HaZohar by the famous great Rebbe Dov Ber containing the teachings he heard from his father Rebbe… Shneor Zalman, who lectured every Shabbat eve to his sons, and turned to the Rebbe (Dov Ber) to write all the teachings which he heard from his holy mouth, because he knew that he would not swerve from his good intentions…".
In the beginning of the book is “a letter send to all “anshei shlomeinu”, an introduction by the “Middle” Rebbe Dov Ber.
Transcriptions by R. Dovbaer of his father’s explications of Zoharic passages. R. Schneur Zalman set aside Friday nights for intensive study of the Zohar. He would explain a page or two to his sons, often using physical and psychological parallels to concretize even the most abstract and abstruse kabbalistic symbolism. In doing so he was, he believed, fulfilling an essential part of the commandment of Torah-study: to explore and elucidate, as far as possible, its inner, esoteric truths.
The Zohar (Hebrew Zohar "Splendor, radiance") is widely considered the most important work of Kabbalah, Jewish mysticism. It is a mystical commentary on the Torah (five books of Moses), written in medieval Aramaic and medieval Hebrew. It contains a mystical discussion of the nature of God, the origin and structure of the universe, the nature of souls, sin, redemption, good and evil, and related topics.
The Zohar is not one book, but a group of books. These books include scriptural interpretations as well as material on theosophic theology, mythical cosmogony, mystical psychology, and what some would call anthropology.
According to Gershom Scholem, most of the Zohar was written in an exalted style of Aramaic that was spoken in Palestine during the second century of the modern era. The Zohar first appeared in Spain in the thirteenth century, and was published by a Jewish writer named Moses ben Shem-Tov de Leon. He ascribed this work to a rabbi of the second century, Simeon ben Yohai. Jewish historiography holds that during a time of Roman persecution, Rabbi Simeon hid in a cave for 13 years, studying the Torah (five books of Moses) with his son Eliezar. During this time he is said to have been inspired by God to write the Zohar.
The fact that the Zohar was found by one lone individual, Moses de Leon, taken together with the circumstance that it refers to historical events of the post-Talmudical period, caused the authenticity of the work to be questioned from the outset. There is a story told about how after the death of Moses de Leon, a rich man of Avila, named Joseph, offered the widow, who had been left without means, a large sum of money for the original from which her husband had made the copy; and she then conFezsed that her husband himself was the author of the work. She had asked him several times, she said, why he had chosen to credit his own teachings to another, and he had always answered that doctrines put into the mouth of the miracle-working Simeon ben Yohai would be a rich source of profit. Incredible as this story seems, it at least proves that shortly after its appearance the work was believed by some to have been written entirely by Moses de Leon.
Over time, however, the general view in the Jewish community came to be one of acceptance of Moses ben Shem-Tov's claims; the Zohar was held to be an authentic book of mysticism passed down from the second century.
The Zohar spread among the Jews with remarkable celerity. Scarcely fifty years had passed since its appearance in Spain before it was quoted by many cabalists, among whom was the Italian mystical writer Menahem Recanati. Its authority was so well established in Spain in the fifteenth century that Joseph ibn Shem-Tov drew from it arguments in his attacks against Maimonides. It exercised so great a charm upon the cabalists that they could not believe for an instant that such a book could have been written by any mortal unless he had been inspired from above; and this being the case, it was to be placed on the same level with the Bible.
The printer, Rabbi Yisrael Yaffe, is known as the "Printer from Kopyst." He printed many Chassidic works between c.1804-1828. Rabbi Yisrael Yaffe was a disciple of Rabbi Menachem Mendel of Vitebsk and was close to the Baal HaTanya. He carried the Baal HaTanya on his shoulders when he was released from prison in 1799. An adherent of Chabad Chassidism, he eventually emigrated to Eretz Israel, settled in Hebron, and established the country's first Hebrew printing press.
Ya'ari lists four different marks employed by R' Yaffe in his works (Ya'ari 182-185). The current mark (Ya'ari 183) shows an architectural element (a memorial stone, according to Ya'ari), with a central tree-like motif at center flanked by urns, and the printer's name on its base. 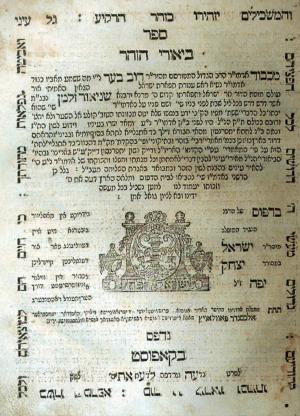