Printings of Masechets from the Talmud were a regular occurance since the beginning of Hebrew publications. This is one such edition from Kopys. It is Masechet Yoma from the Babylonian Talmud.
The printer, Rabbi Yisrael Yaffe, is known as the "Printer from Kopyst." He printed many Chassidic works between c.1804-1828. Rabbi Yisrael Yaffe was a disciple of Rabbi Menachem Mendel of Vitebsk and was close to the Baal HaTanya. He carried the Baal HaTanya on his shoulders when he was released from prison in 1799. An adherent of Chabad Chassidism, he eventually emigrated to Eretz Israel, settled in Hebron, and established the country's first Hebrew printing press.
Ya'ari lists four different marks employed by R' Yaffe in his works (Ya'ari 182-185). The current mark (Ya'ari 182) is the most complex of the four, showing to architectural pedestals, one topped by an urn, and the other by a crowned eagle carrying a banner in its beak. The banner is inscribed "אלכסנדר הראשון יר"ה. A round shield leaning against this pedestal carries the printer's monogram IJK (Israel Jaffe Kopys).
This mark was copied from the Bruenn Hebrew printer Yosef Rossman (Yudlov, p.92). 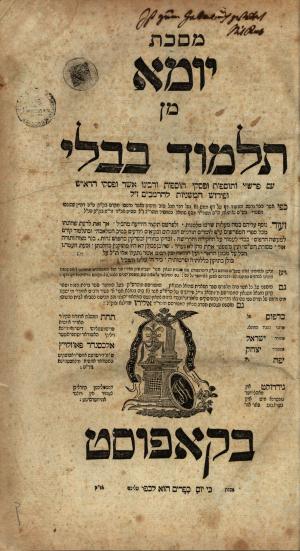 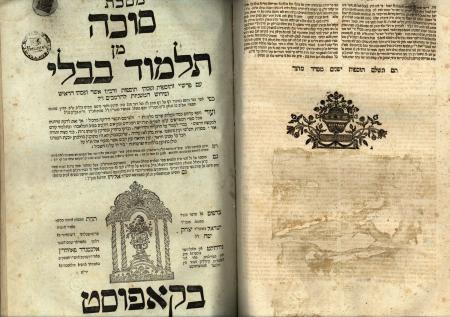 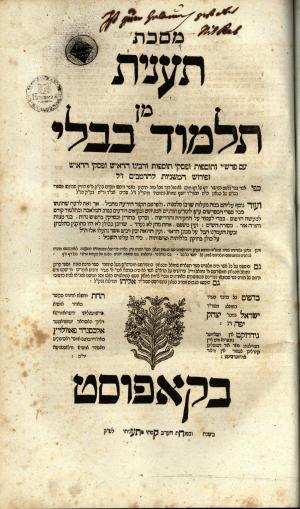