Ketzot HaChoshen ("Ends of the Breastplate") is a halachic work which explains difficult passages in the Shulchan Aruch, Choshen Mishpat (which deals mainly with business and financial laws such as contracts, witnesses etc.) with novel ideas proposed by Rabbi Aryeh Leib. This remarkable work is considered a classic. Familiarity with this work is considered mandatory for any Torah scholar and it is a fixture in any Talmudic library.
Aryeh Leib Heller, Kahana (c. 1745 – 1812) (Hebrew: אריה לייב בן יוסף הכהן הלר‎‎) was a Rabbi, Talmudist, and Halachist in Galicia. He was known as "the Ketzos" based on this work, which was his magnum opus.
Although the book was likely printed in Kopys, Belarus (another opinion attributes its origins to Polna), its title page claims that it was issued in Lemberg. Such false associations - most frequently seen with the highly-esteemed city of Amsterdam - were intended to increase the books' status and value.
The printer's mark shows a shield decorated with a central flower hanging from foliage supported by a decorative base. A variation of this mark (Ya'ari 179) is used by the printer Samuel b. Issachar Baer, who printed in nearby Shklov, as well as several other locations (see GFC B.553). Variations of this device appear on other volumes issued by other printers. An earlier example, from 1804, is see on a book printed by Yosef ben Tzvi Hacohen (B.544). Later examples (B. 541 and B. 542) bear no indication of the printer.
The town of Kopys, a neighbor to the Hebrew printing center of Shklov, became a center of Hebrew printing in its own right during the 19th C. 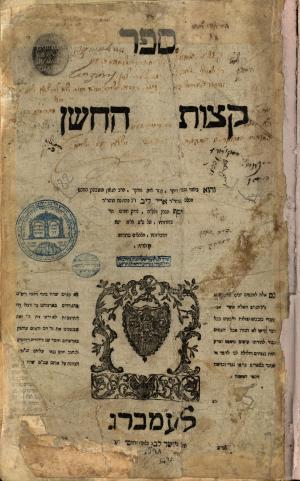