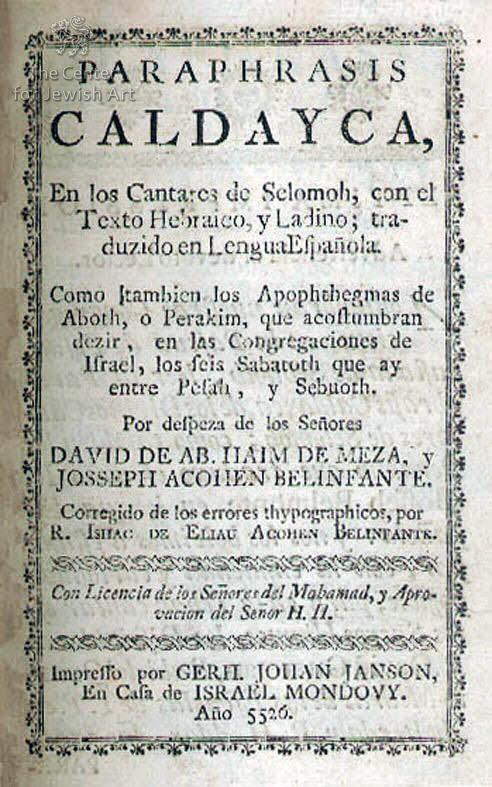 Paraphrasis Caldayca en los Cantares de Selomoh, Shir HaShirim with Ladino translation (in Latin letters) and Spanish translation of the Aramaic translation. * Pirkei Avot, with Spanish translation. [Amsterdam], 1766. Hebrew and translation, passage following passage.
A bi-lingual edition of the Song of Songs in Hebrew and Spanish. Apparently the Sepharadim in Amsterdam, eve 150 years after their arrival in that city, continued to use their language with the consequent demand for Jewish texts in that tongue.
112, 109-144 pages
144 pp., octavo, 155:95 mm., light age and damp staining. A very good copy bound in contemporary vellum over wood boards, rubbed.
Detail Description: Song of Songs and Pirke Avot in Hebrew, Ladino, with Spanish translation for the Marranos. The Marranos arrived in Amsterdam around 1590, some 11 years after the Union of Utrecht (1579) and the birth of the United Provinces of the Netherlands as a Protestant state. They had to wait until 1615 before Jewish settlement was officially authorized, but the Marranos in Amsterdam differed from those in other Protestant countries in that they openly practiced Judaism almost from the moment of their arrival. Thanks to the Marranos, Amsterdam became one of the greatest Jewish centers in the world in the 17th century; it had some of the finest academies and produced some of the greatest Jewish thinkers. Amsterdam was also a haven for oppressed Jews from other places, including France in 1615 and Eastern Europe after the Chmielnicki massacres (from 1648). Erstwhile Marranos from Holland were among the first settlers in Suriname and Curacao, where a substantial Sephardi community came into being after 1650. Other former Marranos were also found in Barbados and in other parts of the West Indies, including Martinique and the Leeward Islands.
Con el texto Hebraico, y Ladino; traduzido en lengua Espanola. Como tambien los Apophthegmas de Aboth, o Perakim... Corregido de los errores thypographicos, por R. Ishac de Eliau Acohen Belinfante ... (septima impression). Compiler: Josseph Acohen Belinfante 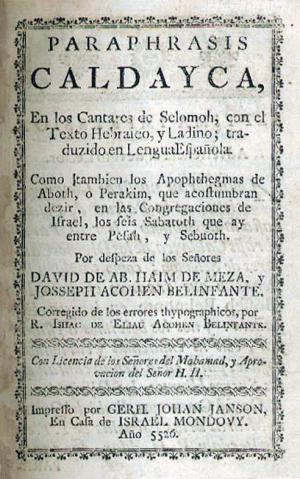 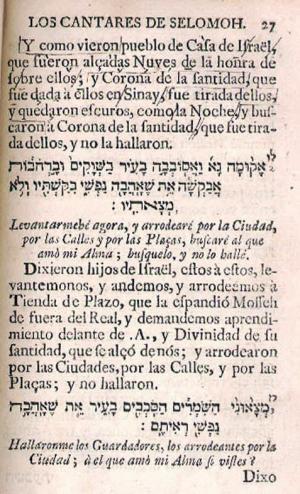