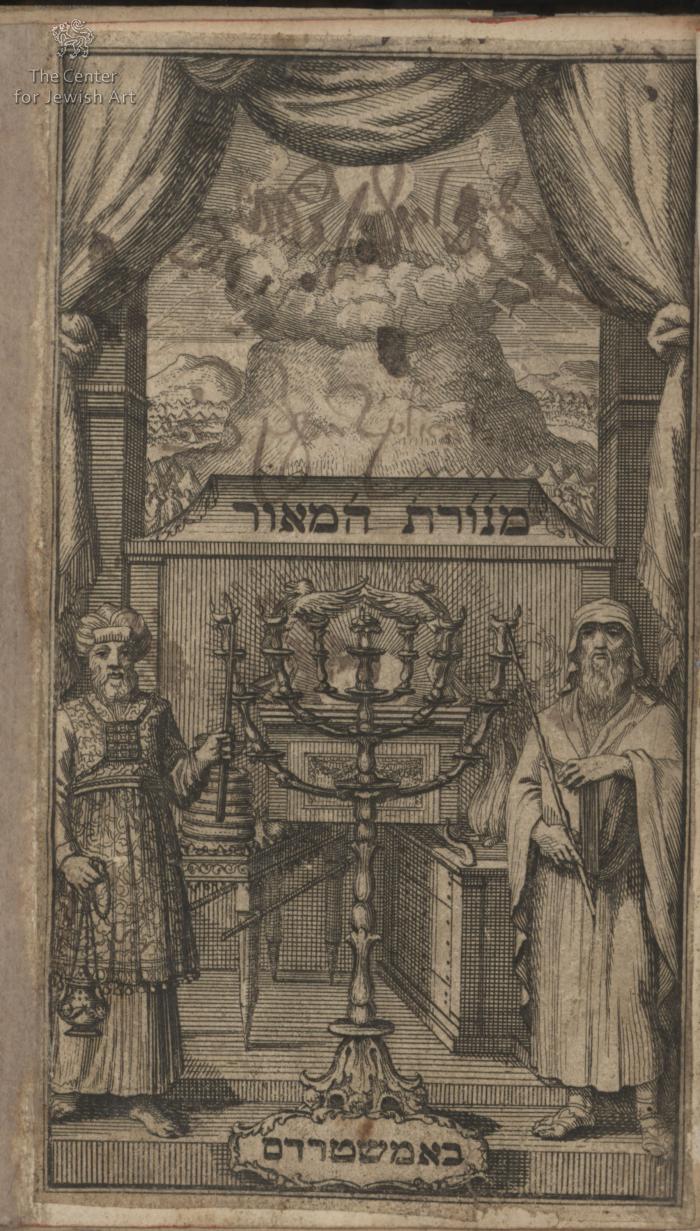 This printed book is an ethical treatise, one of the most popular such writings in Jewish history. Isaac Aboab (fl. end of the 14th century) was a Jewish Talmudic scholar. He was also known by the pen name Menorat ha-Maor or Menoras HaMaor, a work which he authored. He lived in Spain during the 14th century. As shown by Zunz ("Ritus," pp. 204–210), he is not to be confused with Isaac Aboab, rabbi of Castile, the supercommentator of Naḥmanides, who died in 1493.
He was a man of affairs, who, towards the end of his life, devoted much time to literary work and to preaching, as he found that great Talmudic scholars and important seats of learning were rare. In his time, the Jews for whom he wrote still understood and spoke Arabic. He belonged to a period of intellectual decline when men took naturally to eclecticism. He combined extensive rabbinical knowledge with philosophical erudition, and was fond of mystic interpretation of the Mosaic laws and ceremonies. He quoted Aristotle and Plato, though only from secondary sources, and endeavored to illustrate passages from the Talmud and the midrashic literature, with which he was especially familiar, by utterances taken from the philosophical, the ethical, and the mystic literature of his time. His chief aim was the popularization of knowledge and the elevation of the masses.
Aboab wrote three books:
The first, on Jewish rites, under the title of Aron ha-'Edut ("The Ark of the Testimony"), was divided, after the manner of the Decalogue, into ten sections, each again subdivided into chapters and paragraphs. The various ritual laws were therein traced to their Talmudic sources, and the decisions of the Geonim and later interpretations added. His second book, on the prayers and benedictions, was called Shulḥan ha-Panim ("Table of the Showbread"), and was divided into twelve sections, symbolizing the twelve loaves of the showbread in the Tabernacle; both works unfortunately are lost. His third book has survived, and has won considerable fame for the author, though in his humility he assures his readers that he composed it chiefly for his own use as a public speaker. But besides this it has contributed probably more than any other medieval book to the popularization of rabbinical lore and to the religious edification and elevation of the masses. It belongs to that class of ethical works which sprang up in the 13th century in a time of reaction against the one-sided manner in which Talmudic studies had been previously pursued.
"These Talmudists," he says in the preface, "consider it their duty to propose difficult questions and answer them in a witty and subtle manner, but leave unnoticed the precious pearls that lie upon the bed of the Talmudic ocean, the haggadic passages (similar to Midrash) so rich in beauty and sweetness." He conceived, therefore, the plan of grouping together the rich material stored up in the vast treasure-house of the Haggadah - (see Aggadah) from the religious and ethical point of view, and of presenting it in a book which he called Menorat ha-Maor ("The Candlestick of Light"; compare Numbers 4:9 also translated as "The Menorah Lamp") [1]), intending by it to illumine the minds and the hearts of his coreligionists. With reference to the seven-armed candlestick (Menorah) in the Tabernacle (as described in Exodus 25:31 [2]; and Numbers 8:2 [3]), he divided the book into seven sections, each of which bears the title of Ner or "Lamp" subdivided into separate parts and chapters. It can hardly be said that the division of the matter treated is very logical and systematic, nor indeed does the work lay any claim to originality; but in presenting the beautiful moral and religious truths of Judaism in homely form, Aboab supplied to the average reader a great need of the time. Its skillful arrangement of the various Biblical and rabbinical topics and its warm tone of deep earnestness and sincerity could not fail to appeal to the popular heart. And as in the course of time the sermon, then still in use among the Spanish Jews, ceased to be a part of the divine service because the preacher had to give way to the Hazzan, or precentor, the Menorat ha-Maor became a substitute for the living voice of the preacher. It was translated into Spanish and read to attentive assemblies of the people, particularly to those not versed in the Law. It thus became the household book of the medieval Jews. It was published with a Spanish translation (Leghorn, 1657), with a Hebrew commentary and a Judæo-German translation by Moses Frankfurter (Amsterdam, 1701), with a modern German translation by Jacob Raphael Fürstenthal and Benzion Behrend (Krotoschin, 1844–46). It was translated also into modern Yiddish, in Wilna, 1880. The book should not be confused with a work of the same name by Israel Alnaqua.
This edition with its engraved title page seems to be an smaller copy of the edition of 1687. That edition also has an engraved title page by the same artist in an almost identical form. It is most likely that the artist is the same Avraham bar Ya'akov who illustrated the famous 1695 Amsterdam Haggadah. 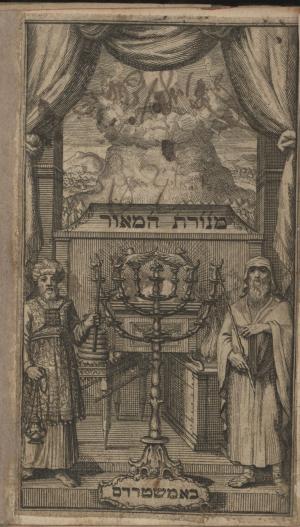 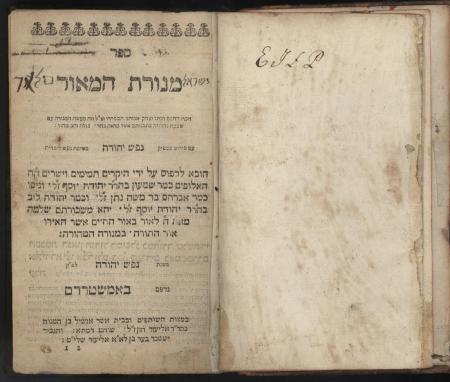 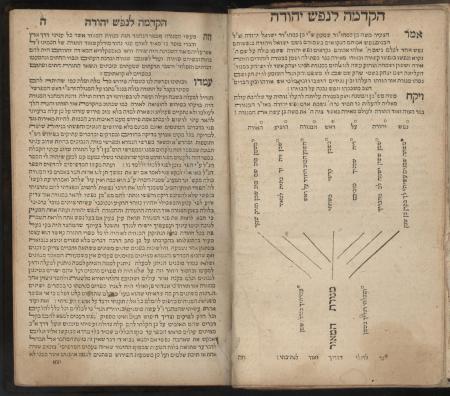 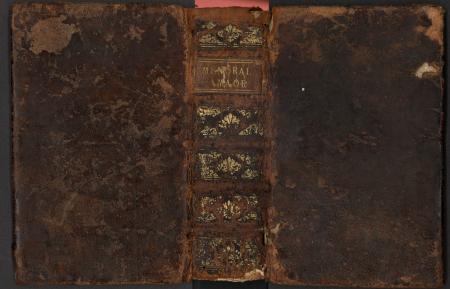 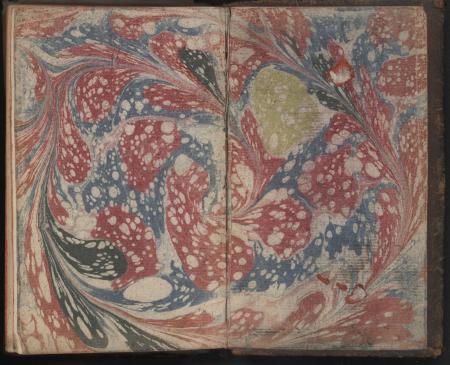 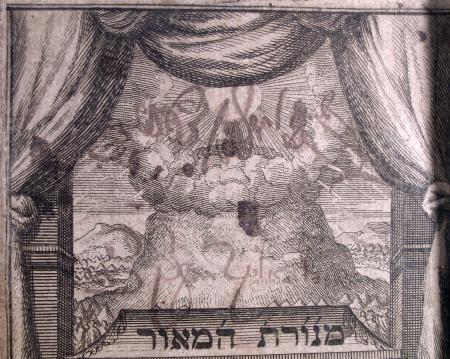