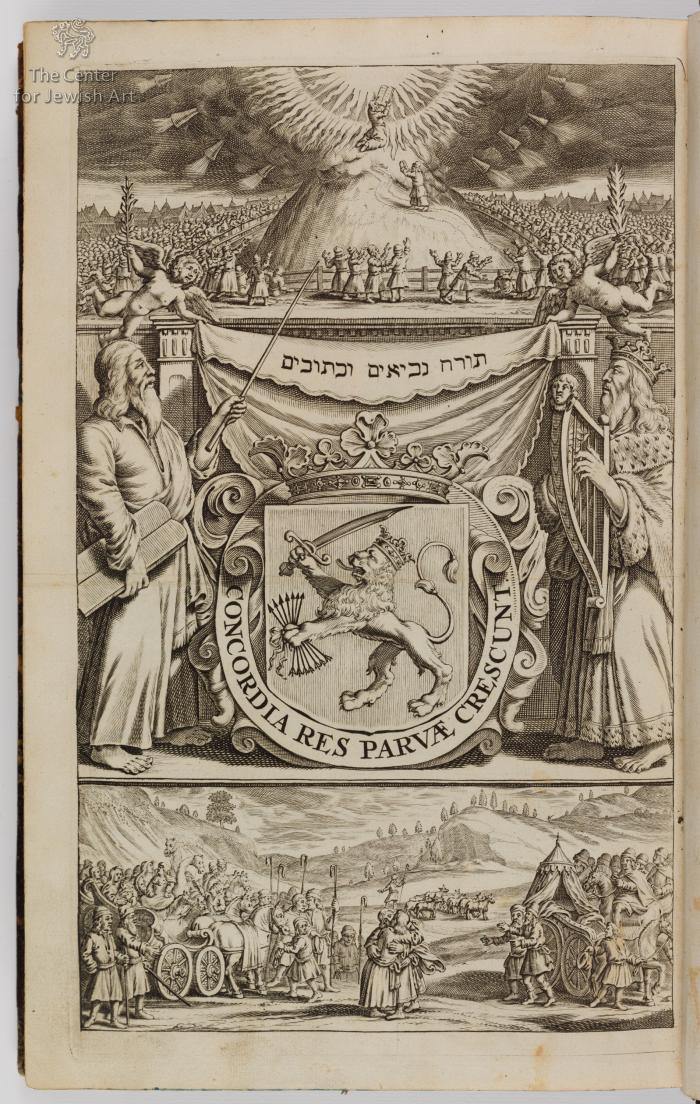 Torah, Neviim and Ketuvim, "translated from the Holy Tongue, and written in Yiddish", Yiddish translation of the Bible, based on the following commentaries: Rashi, ibn Ezra, Radak, R. Saadya Gaon, Ralbag and others. Amsterdam: Joseph Athias, [1686].Translated by R. Yosef son of Alexander Witzenhausen. Additional elaborate, engraved title page, the center of which is occupied by the coat of arms of the Dutch Republic, flanked by the figures of Moshe and King David. Biblical scenes unfold at the top and bottom of the page. Approbations of the rabbis of the Vaad Arba HaAratzot (Council of Four Lands) on leaf [4]. One was signed at the Yaroslav (Jarosław) fair in 1677, and the other at the Lublin fair in 1678. The approbations acclaim the printer "Joseph Athias son of the holy Abraham Athias who was burnt at stake in Spain", for the excellent printing press he established "and he improved upon what was already before him, to accord grandeur and glory to the Torah, with beautiful paper and ink, and by attaching crowns to the letters…"

Joseph Athias presumably began printing the book around the year 1677 (the approbations from the Vaad Arba HaAratzot and the ban against printing this translation for sixteen years following the printing of the book are dated 1677 and 1678). However, another translation of the Bible was printed concurrently in Amsterdam by Uri Phoebus HaLevi, in 1676-1679 (see previous item), leading to a dispute between the printers, each one accusing the other of copyright infringement. This dispute between the two printers is mentioned in rhyming verses in the center of the second title page, as well as in the "translator's apologia" at the beginning of the book. Regarding the controversy between the printers surrounding this edition, see: A. M. Habermann, Perakim BeToldot HaMadpisim HaIvriim, pp. 300-310. These two translations are considered the first Yiddish translations of the Bible.
Until the time of this publication, there had been no complete Bible printed in a Yiddish translation. Then, toward the end of the 1670's, two different publishing houses in Amsterdam – that of Joseph Athias and his son Immanuel (the most highly regarded Hebrew printers in Amsterdam), and that of Uri Phoebus Halevi - decided to create such a translation and vied with one other to be first to the market. This competition gave birth to a major conflict, involving the Dutch authorities, the Jewish Council of the Four Lands and even the king of Poland. Eventually both versions were published after a delay of eight years. Each was issued in 6,000 copies (intended for the Polish Jewish market) and both were commercial failures. They brought about financial disaster for both houses.
The volume has a particularly beautiful title page, featuring the Giving of the Ten Commandments on Mount Sinai. In the center is featured the coat of arms of a royal supporter who had given his blessing for this enterprise. Moses and King David stand on the sides, while Joseph’s reunion with Jacob and his brothers on the way to Egypt is depicted in dramatic detail at bottom. Such elaborate illustrated title pages were far more popular in Amsterdam presses than in the Hebrew presses of any other city.
Following the title page, Athias’ edition contains: a privilege, in Latin and Yiddish, from the Dutch authorities; a dedication, also in Latin, from Athias to Frederick William, Elector of Brandenburg; an approbation, with numerous signatories, from the Va’ad Arba Aratzot for sixteen years with an accompanying Yiddish abstract; an introduction from Athias and an apologia from the translator (Joseph ben Alexander of Witzenhausen).
Despite the fact that it contains no commentaries, the Bible is set in a typeface similar to the “Rashi script”. This is because the work is in Yiddish, and not in the “holy” language of Hebrew. Adapting the distinct typefaces used to differentiate between sacred text and commentary, printers also differentiated between Hebrew and Yiddish.
This book is part three of four volumes of the set printed by Immanues Athias. The book contains illustrations that are the same as some of those printed in the first Latin translation of the Talmud, issued in six large volumes starting in 1898 in Amsterdam.
Immanuel Athias took over the Hebrew section of his father, Joseph's, press in 1685. Although the father is more renowned, especially for his Bible editions, it was Immanuel who was responsible for the family's high repute in the world of Hebrew books. His four-volume edition of Maimonides' Mishneh Torah (1702), of which 1,150 copies were printed, was described by M. Steinschneider as "one of the most elegant and beautiful Hebrew editions to have ever appeared." His last issue was a Sephardic rite prayer book (1709). Much of Athias' printing material, which was highly regarded, became the property of the Proops family in 1761. 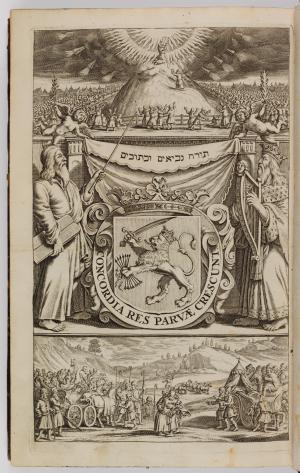 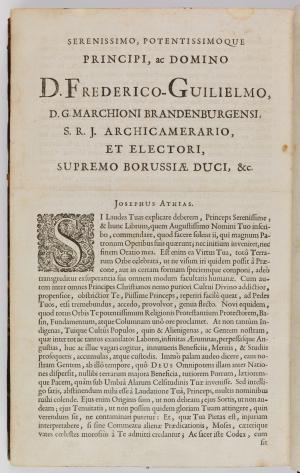 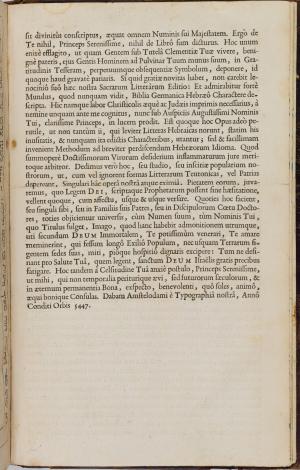 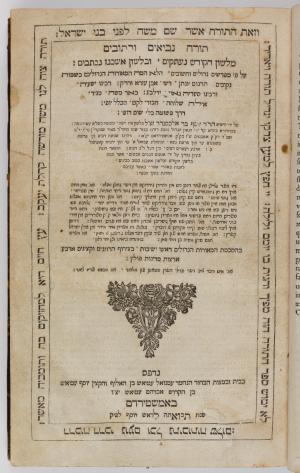 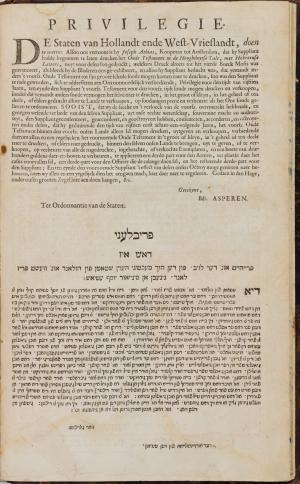 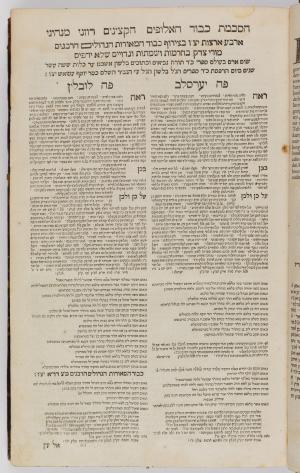 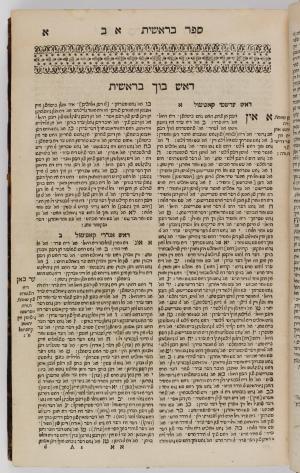 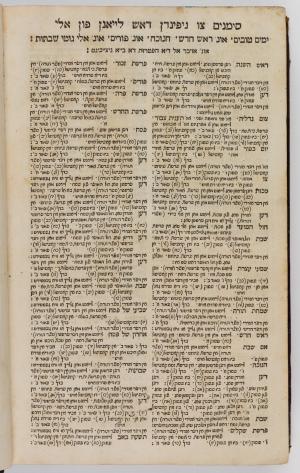 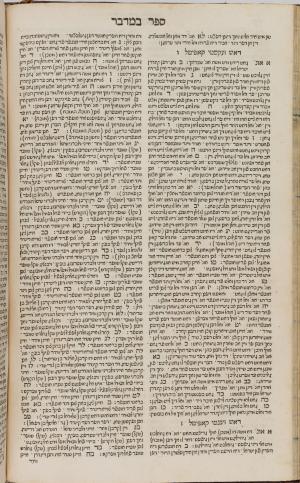 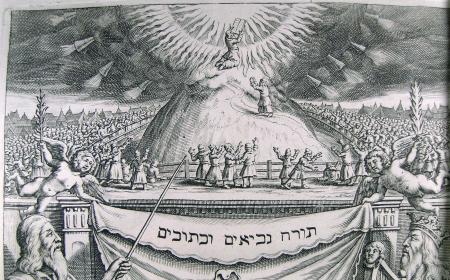