Siftei Yeshenim, by Rabbi Shabtai Meshorer Bass. Amsterdam, [1680].Lexicon of books and authors from the writing of the Torah until the time of the author. The first Hebrew bibliographic book.
This is the first edition (1680) of the first bibliography of Hebrew books written by Jewish authors. Prepared by R. Shabbetai ben Joseph Bass (1641 – 1718), the work lists some 2,200 Hebrew titles: about 1100 printed books, and 825 manuscripts. In his introduction, Bass lists ten benefits that may be gained from his work. He mentions that according to R. Isaiah ha-Levi Horowitz (Shelah), there was great merit for the untutored in just reciting the names of books – a purpose for which Siftei Yeshenim is eminently suited. This is R. Bass' chief work.
Shabbethai ben Joseph Bass (1641–1718) (Hebrew: שבתי בן יוסף), born at Kalisz, was the father of Jewish bibliography, and author of the Sifsei Chachamim supercommentary on Rashi's commentary on the Pentateuch. After the death of his parents, who were victims of the persecutions at Kalisz in 1655, Bass went to Prague. His teacher there in the Talmud was Meןr Wהrters (d. 1693); and Loeb Shir ha-Shirim instructed him in singing. He was appointed bass singer in the celebrated Altneuschule of Prague, being called, from his position, "Bass," or "Bassista," or "Meshorer." His leisure time he devoted to literary pursuits, more especially to improving the instruction. He moved to Amsterdam, later established his Hebrew printing press in Dyhernfurt. Renowned for his work Siftei Chachamim on Rashi's commentary on the Torah, printed in hundreds of editions of the Chumash.
The book’s entries are by title, and include author name, a succinct description, place and date of publication, format, and for manuscripts, location. The volume also includes Sha’ar Bat Rabbim (an alphabetical author listing by last name) and Sha’ar ha-Hitzon (a listing of about 150 titles by non-Jewish authors).
The volume was published by David de Castro Tartas, a Portuguese-Jewish printer in Amsterdam. David was one of three sons of Portuguese "New Christians" who had escaped from Bragança, and settled, under the Catholic names Cristóvão Luís and Isabel da Paz in the French town of Tartas. In 1640 they moved to Amsterdam to live freely as Jews, retaining the surname "Tartas." David's older brother Isaac de Castro Tartas (ca. 1623-1647) stayed only 1 year in Amsterdam, emigrated to Brazil, and later was martyred in Lisbon.
David de Castro Tartas started as a typesetter in the printing house of Menasseh Ben Israel, where his name is mentioned in 1647. He later appears in 1662 as owner of his own press and in 1678 as a member of the Amsterdam Printers' Guild. His press competed with that of Uri Phoebus Halevi and the press of Joseph Athias.
108 leaves 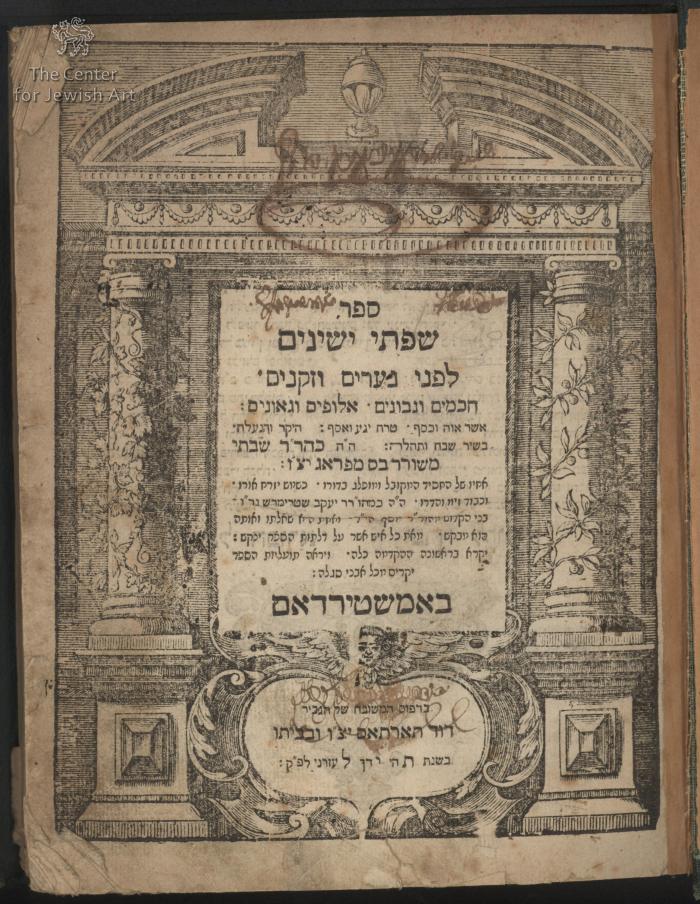 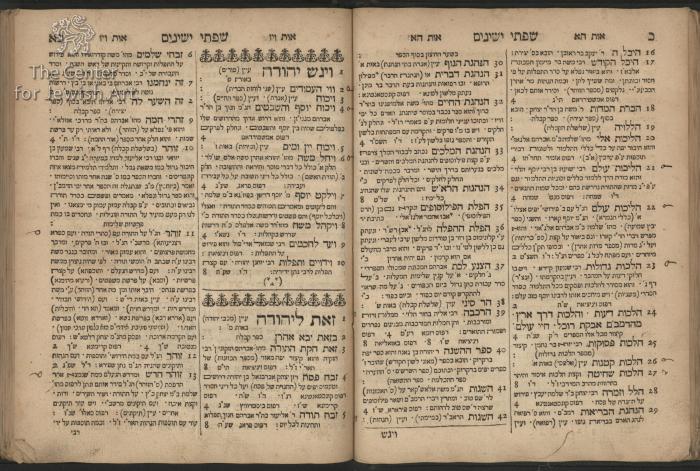