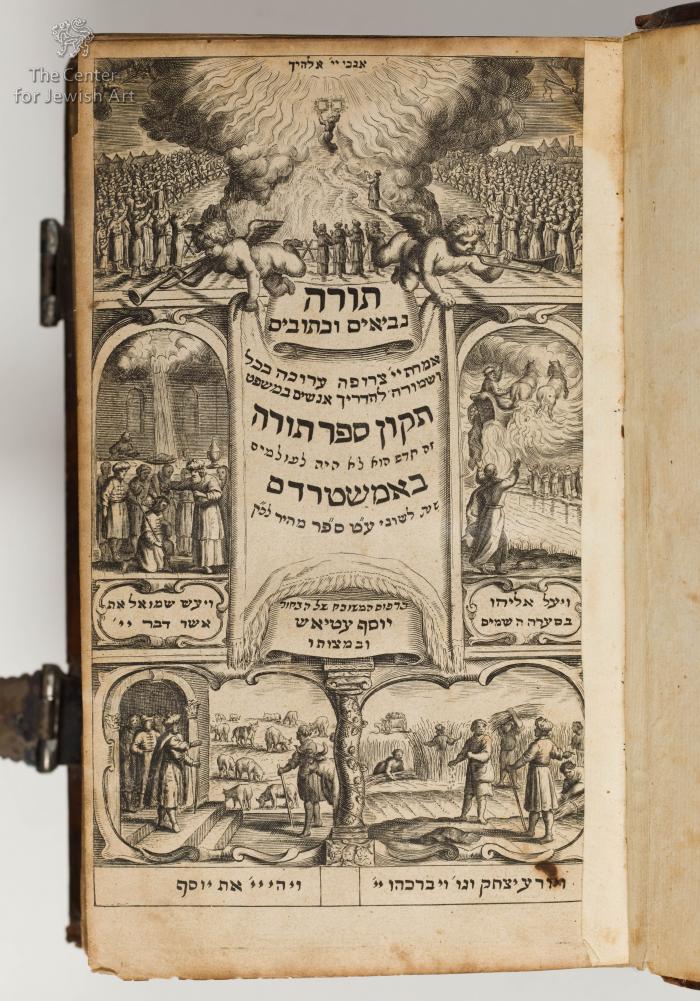 Bible - Five Books of the Torah, Neviim Rishonim, Neviim Acharonim and Ketuvim. Amsterdam: Joseph Athias, [1659-1661]. The first edition of the Bible edited by Johann Leusden. He also authored the Latin foreword, which follows the Hebrew foreword by the proofreaders. This edition was proofread and corrected compared to previous editions, and was considered for many years the most accurate edition of the Bible. In the Hebrew foreword, the proofreaders boast that although some may mock their assurance that the book is free of mistakes, they guarantee it and are prepared to put the book to test. Four parts in one volume. Fine, engraved general title page, depicting Biblical scenes, as well as a general Latin title page. Engraved divisional title page for each of the three other parts. [9], 234; 180; 175, 180-190; 198 leaves. Leaves 159-166 of second sequence bound in wrong order. 18 cm.
This important Bible was only the second book to be printed by Joseph Athias. It is the first Hebrew Biible to employ Arabic numerals for the numeration of chapters and verses. In printing this Bible, Athias contacted Johannes Leusden, Professor of Hebrew at Utrect University, to assist in the innovation of Arabic numerals in a Hebrew Bible, which would facilitate the referencing of text and quotations. Since Athias' market included non-Jews, he applied for a privilege from the states of Holland and West-Friesland, the first such application from a Jewish printer. His application was denied because the Leiden printer Georgius Nisselius had already been granted a privilege and begun printing. Nevertheless, Athias was allowed to print his Bible. This Tikun Sofrim is one of the most accurate editions - the great scholar R. Eliyahu son of Azriel writes in the preface of his work Michtav M’Eliyahu that this is the most precise edition of Tikun.
The first title page, entitled Tikkun Sefer Torah, shows five biblical vignettes featuring Elijah, Samuel, Isaac, Joseph, and, at top, Moses receiving the Law at Sinai. This title page was used later by different printers including one in Italy in the 18th century.
Joseph Athias (c.1635 – 1700) was born in Spain, and via Portugal and Germany, eventually reached Amsterdam. His father, Jorge Mendez de Castro, had been burned alive at an auto-de-fé in Cordova in 1665. At the age of 23, in 1658 Athias opened a Hebrew print-shop (in the same year as Uri Phoebus establish his press) which would be active into the 18th C. A proficient businessman, Athias was able to establish commercial ties with bookmen in Holland and elsewhere. He was the first Jewish printer to be accepted, in 1661, as a member of the Amsterdam Bookprinters Guild.
Among the markets addressed by Joseph Athias, in contrast to other Hebrew printers of that time, was the printing of books for the non-Jewish market, a market with enhanced business prospects. Relying on the stereotype process, in which pages are composed and fixed in an iron frame which can be stored for future use, he was able to print 250 Bibles in four hours. The stereotype method was not employed for Athias’ Hebrew books as that market was insufficient to justify the expense of the process. His popular quarto Hebrew Bible, for example, has a print-run of only 3,000 copies (in contrast to the more than a million copies of an English Bible he claimed to have printed for the English and Scottish market).
Other works published by Athias include: Pentateuch with Megillot and Hafṭarot (1665); Psalms, with Dutch translation and proof-read by J. Leusden (1666-67); and a second edition of his 1659 Bible. More carefully prepared than the first, and with still more beautiful type and decorations, this 1667 edition earned Athias a gold medal and chain worth 600 Dutch florins from the States General of the Netherlands. A cut of the medal appears on the book’s title page.
Athias' business career was marred by his controversy with the printer Uri Phoebus over their almost simultaneous printing of Yiddish translations of the Bible. Phoebus’ edition, a translation by Jekuthiel ben Isaac Blitz, had taken him three years to complete, and proved to be a severe financial drain. Prior to printing it, however, he had obtained from the Polish Council of the Four Lands the privilege that for ten years all reprints were to be prohibited and laid under ban. The rabbis of the Portuguese and German congregations of Amsterdam and elsewhere confirmed this privilege. In addition, through the influence his two Christian partners, the alderman Wilhelm Blau and the jurist Laurens Ball, Phoebus had also obtained from John III. Sobieski of Poland a further privilege that this Yiddish translation was to have copyright in Poland for twenty years. The work was not even completed, however, when one of his compositors, Josel (Joseph) Witzenhausen, himself made a Yiddish translation, for which he secured Joseph Athias as printer and publisher. Through his wealth, Athias possessed certain advantages over his rival, and was also able to obtain privileges for his translation from Holland and Zealand, and even succeeded, through a Jewish agent of the Polish crown in Holland, in gaining still more favorable protection from the Council of the Four Lands. Although Witzenhausen was warned not to compete with Phoebus and Blitz, both he and Athias ignored the injunction, and began to print as early as December 5, 1678. Phoebus’ edition appeared at Amsterdam in 1678; that of Athias, in its complete form, in 1679.
The printers’ dispute embroiled both men in litigation, and, the market being flooded with two translations, brought both Athias and Phoebus to financial ruin. Athias’ press was forced into temporary bankruptcy, and in 1695 both he and his son Immanuel had to go into hiding. Nevertheless, they were able to settle their accounts, resume printing, and prosper again.
Exquisitely bound in gold-tooled leather, with large silver clasps and delicate colored goffering. . 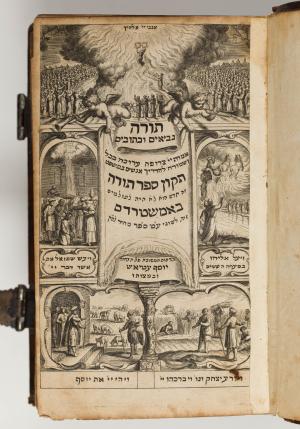 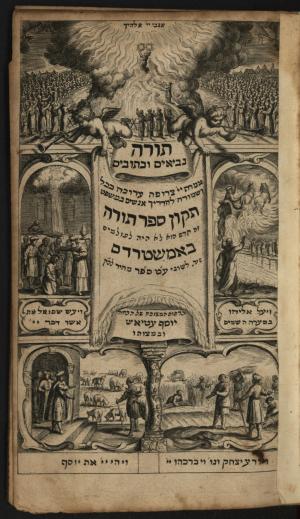 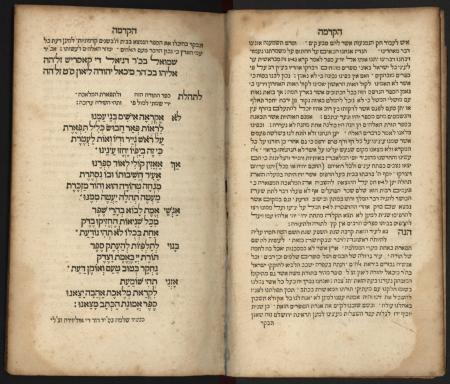 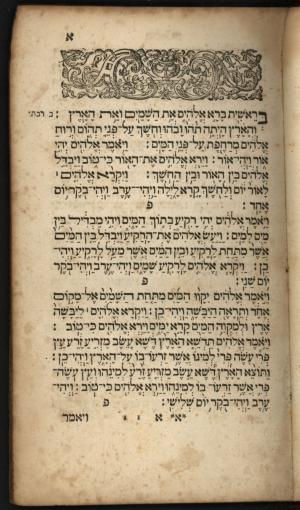 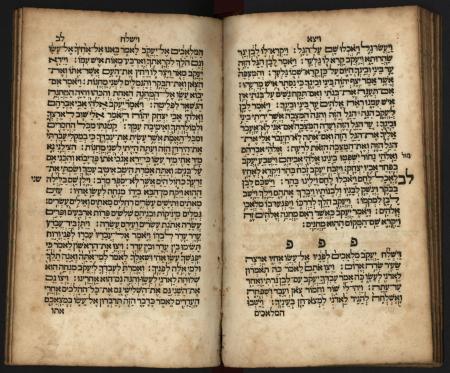 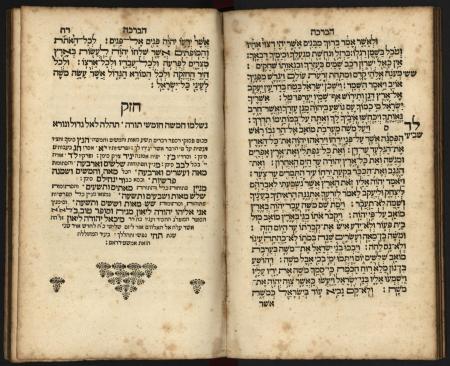 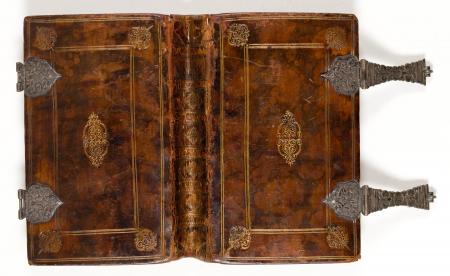 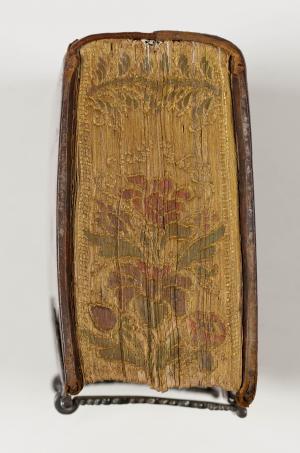