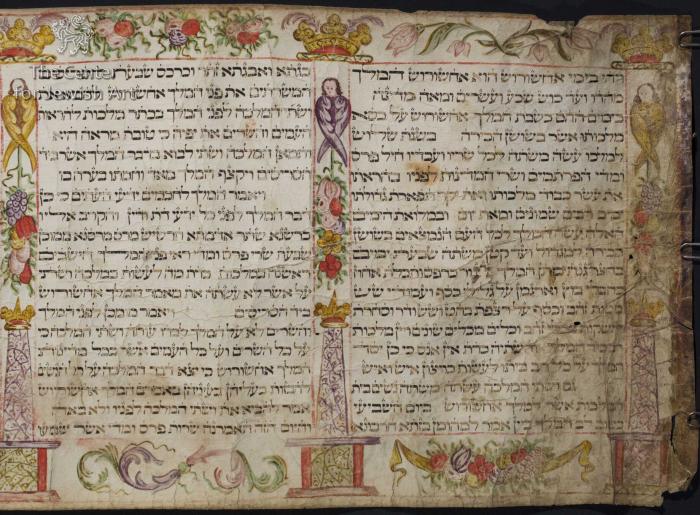 The scroll is decorated with a hand-painted border. The text columns are written within the panels framed with red lines. The upper margins are adorned with different floral motifs (usually with three or four flowers) alternating with three small bouquets of flowers placed side by side. The sections of the decoration are separated with crowns decorated with ostrich (?) feathers. Below them, in the spaces between the text panels appearing cherubim with their wings down. Their wigs are alternately painted yellow or violet. They seem to hold a ribbon from which are suspending garlands made of flowers, grapes, and perhaps other fruits. Below the garlands, columns narrowing upwards topped with a crown are standing; their bases in the lower margins are placed. They separate garlands made of colorful flowers (daffodils, tulips, roses, and carnations) and fruits pinned up on draped fabrics, appearing alternately with acanthus leaves. The same pattern repeats along the entire length of the scroll, however, individuals the segments differ from each other, but only to a small extent. The decoration of the manuscript includes the only narrative scene from the Book of Esther - ten sons of Haman hanged on the gallows (Es. 9:14) - that is incorporated in the seventeenth column in which their names are listed. The left margin of the scroll is not decorated. 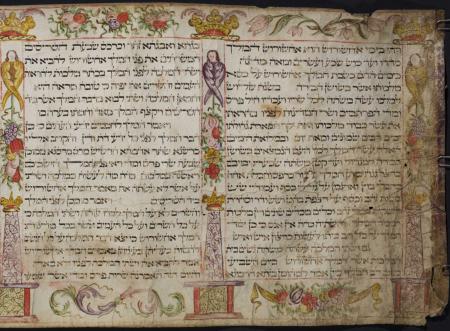 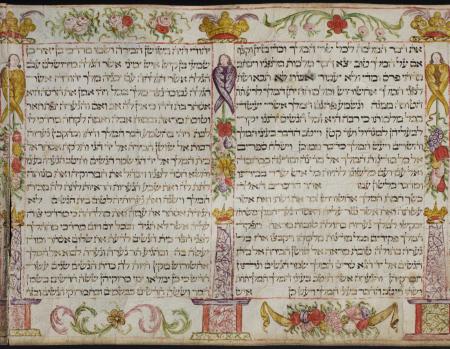 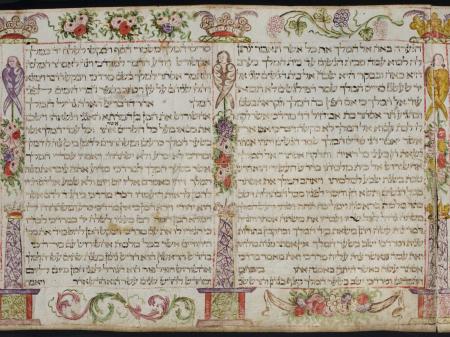 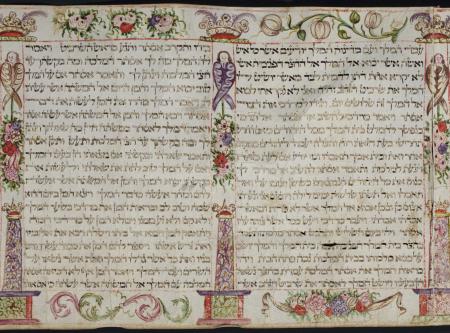 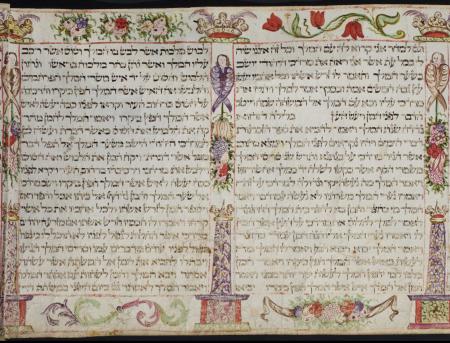 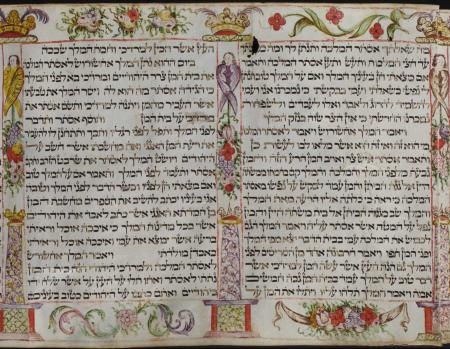 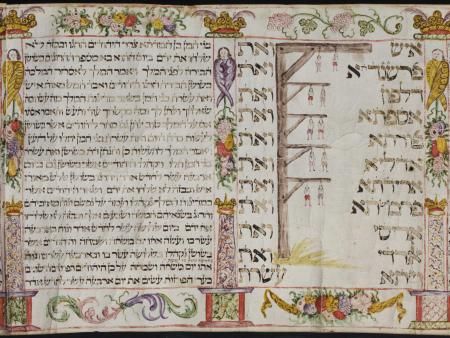 The sheets are crumpled, the text is faded in many places or losses in the text – the holes visible in several places of the parchment sheets. In many places only remains after the letters are visible.

It is common that only one component of the letter is well preserved, while all others are slightly visible.

The beginning of the scroll is seriously damaged.

The scroll is formed of 6 sheets containing a total of 20 text columns with 19 lines, except for col. 17 including 11 lines divided into two half-columns.

The text is inscribed in the Hebrew "Amsterdam" square script with tagin in black ink with brown shades, on the flesh side of the parchment membranes that are very thin and bright. The side of the text and decoration is smoother and the other one is rather suede but both sides of the sheets are still rather similar.

The letter ח (Es. 1:6) is highlighted by its size (it is larger than an average letter in the scroll and bolded) and form (it is formed of two parts joined with a roof and every of three elements is decorated with three tagin). The letter ת (Es. 9:29) is enlarged and bolded. Other enlarged and diminished letters are included in col. 17.

The ruling is slightly visible but originally it was done and contained both - upper and lower - lines marked with a hardpoint along with the sheets.

The last part of the sixth membrane that is ca. 35 mm wide is blank and strongly rolled which makes accurate measurement difficult.

The paints on the second sheet are a bit different, e.g. yellow color is much brighter and delicate.

Online collection of the ritual objects from the E. Ringelblum Jewish Historical Institute is available here: https://cbj.jhi.pl/documents/633639/0/ (accessed on 12.07.2021).