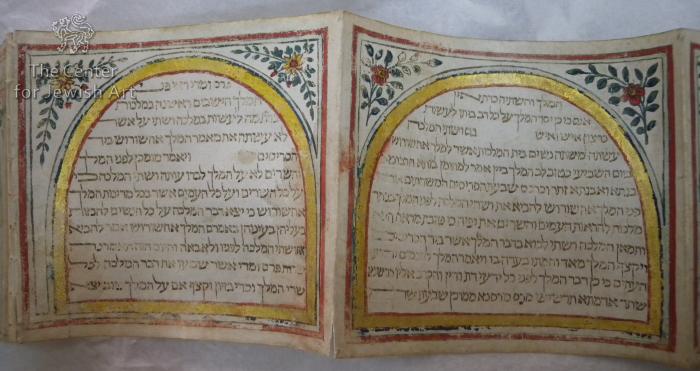 The Hebrew text of Book of Esther is inscribed in the lunettes of the golden arches. Each arch is framed and two flowers are placed in the upper corners of the frame; the floral decorations differ along the megillah. Starting from the second membrane, a floral decoration is added also in the spaces between the arches. The inscription of the scribe is incorporated in the arch after the last section of the text and the next one is blank. The coloring of some sheets is rather faded and this contrasts strongly with the coloring of the sheets nos. 2 and 3 that is still very well preserved. On these sheets, the style of decorations is slightly different (e.g. the flowers are larger).

The scroll is mounted on a wooden rod that is 260 mm high.

The initial benedictions are inscribed at the beginning of the scroll and are placed within a decoration that is the same as in the megillah but only here, the text is flanked by two columns. There is no specific layout of the text in the column. 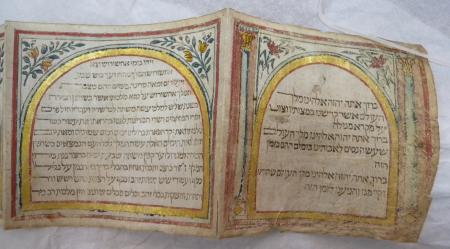 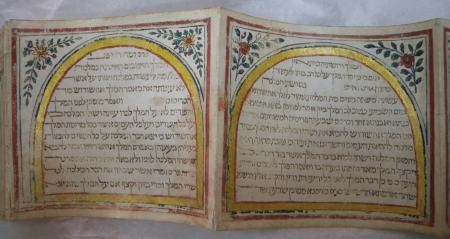 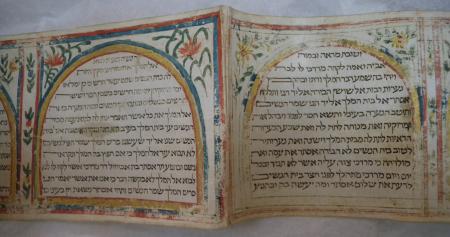 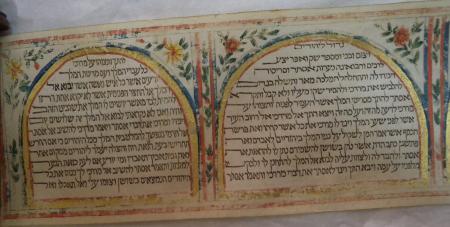 The Book of Esther in Hebrew with initial benedictions

The scroll is formed of 9 membranes containing 34 text columns (+ one column with benedictions and another one with the scribal inscription) with 12 lines, except for col. 28 with 11 lines.

Col. 27 contains lots of extremely elongated letters so the next column could contain only the section listing the names of Haman's sons (Es. 9:6-10). Col. 28 contains numerous wide letters too and its layout is not regular.

The text is written in Sephardi square Hebrew script, in brown ink; the corrections were made in black ink.

Several upper lines under the arches are shorter than the remaining lines in a particular text column.

The letter ח (Es. 1:6) is enlarged and exceptionally here it is composed of two parts joined with a roof. The letter ת (Es. 9:29) is larger too. Other enlarged and diminished letters are included in col. 28.

The membranes are made of bright parchment of medium thickness and stiffness.

The ruling in some places can be discerned.