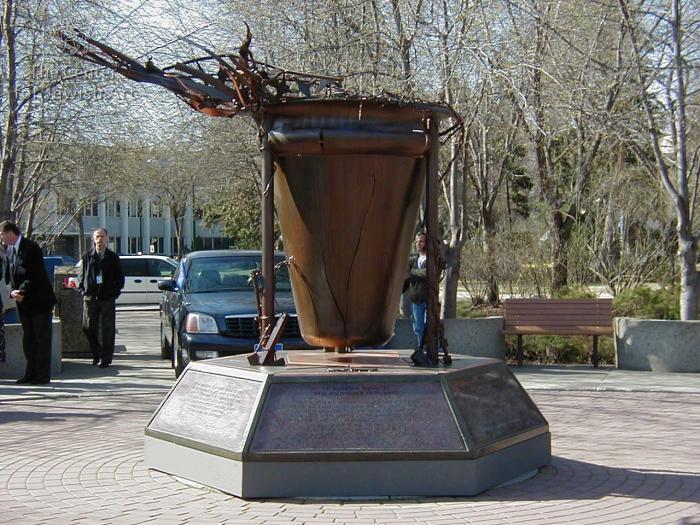 The base has a number of inscriptions, among them words from Nobel Laureate and Holocaust survivor Elie Wiesel, Martin Niemöller, and others.

This monument is dedicated to those who suffered and survived,

And to those who perished in the flames of the Holocaust.  To our
Parents, and Grandparents, Brothers and Sisters. To the One Million
Jewish Children, so brutally murdered.  To those who were taken and those who were lost, in the camps, and the ghettos and the dark, frozen forests.
Within the shadow of this broken cup whose flames scar the soul of our people, we take this vow: Never let the sacred memory of our vanished parents and dead children be scorned or erased.  Tell the world of the depths to which humanity can sink and of the heights to which it soared – even in Hell itself. Memories evoked, as here, may stay tomorrows Inhumanity.
Zachor Remember
(Yizkor)
May God remember the souls of our brethren, the children of Israel, victims and heroes of the Holocaust,
The souls of six million Jews, who were put to death, and who were killed, and who were choked and who were buried alive.
May God remember the holy communities who were destroyed for the sanctification of His name.
May God remember their sacrifice with the sacrifice of all other martyrs and heroes among the people of Israel from all eternity
And let him bind their souls in the bond of Life.  The beloved and the pleasant ones, in their lives and in their deaths they were not separated.  May they repose in peace on their resting places.
Now let us respond
Amen.

“In the End, we will remember not the words of our enemies, but the silence of our friends.”
(Martin Luther King Jr.)

“The world is too dangerous to live in,
Not because of the people who do evil,
But because of the people who sit and let it happen.”
(Albert Einstein)
“I swore never to be silent whenever and wherever human beings endure suffering and humiliation.  We must always take sides.  Neutrality helps the oppressor, never the victim.
Silence encourages the tormentor, never the tormented.”
(Elie Wiesel)
Let the Holocaust be a symbol before our eyes
of such darkness as must never be repeated.
Let our tattooed numbers be
a sign upon our arms
of such evil as must never happen again.
So let us consecrate ourselves
to bearing witness from generation to generation
so that no one will forget.
They were poets who never wrote
The artists who never dreamed,
The students who never learned,
The teacher who never taught,
The sons and daughters who never became mothers and fathers.
More than one and half million  children,
more than one and a half million eternities.
Each with a destiny to fulfil
with tomorrows to discover.
There are no cemeteries where we can bow our heads for them
No graves where we can say Kaddish.
The earth is soaked with their blood,
our being pervaded by their memory.

The artwork was commissioned by the United Jewish Federation of Edmonton, property of the Province of Alberta. 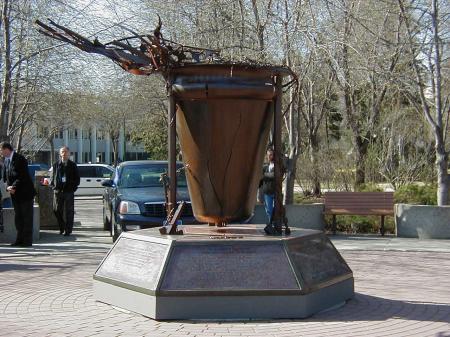