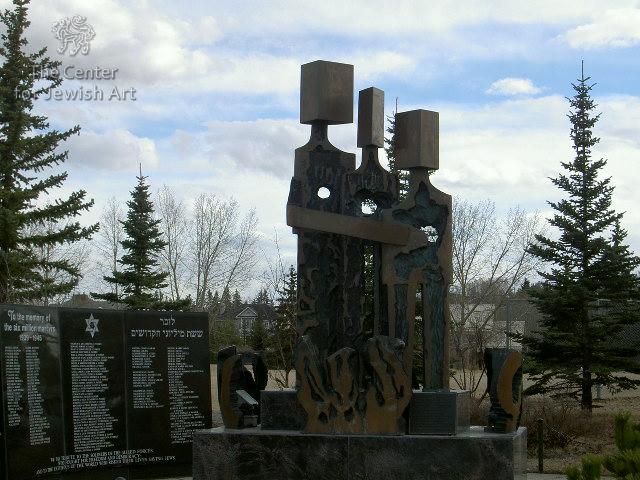 Six million killed Jews, the soldiers of the Allied forces, and the Righteous of the world.

A bronze sculpture represents a group of three figures, with flowing bodies and cubed heads rising from the flames. The bronze group is set on a rectangular base.

According to JCC in Calgary, "the sculpture was designed to show that the spirit of the Jewish people could not be extinguished. The rough, open areas represent the scars and mutilation of body and mind which took place. The flames are symbolic of the inferno inflicted upon the Jews of Europe during the Shoah. The bronze figures are protected by the long arm of the tallest figure. This represents the solidarity of the individual family and the universal family of Jews. The burnished heads illustrate the contribution made by Jews from every walk of life to the advancement of humankind. Although attempts may be made to break the body and spirit, the creative mind will always triumph."

Another part of the memorial is a granite wall placed by the side of the sculpture. The wall is built of three slabs. The central one features Magen David with the word זכור [Remember] in Hebrew. The wall is inscribed with a dedication to the six million martyrs, the soldiers of the Allied forces, and to the Righteous of the world. The wall features a list of congregants' family members who perished in the Holocaust.

By the side of the monument, there is an informative plaque "Brief history of the systematic deprivation by law of the civil rights, jobs, property and life of "non-Aryans" by the Nazi party."

The inscription in English on the base under the sculptural group reads:

In tribute to
the six million
Jews who perished
in the Holocaust
between 1939 - 1945
Donated by
William and Alyse Schwartz
in loving memory of
their parents
Louis and Regina Schwartz
Isaac and Celia Schwartzpelz
November 2, 1986 Tishrei 30, 5847

The granite wall has inscriptions in English and Hebrew.

The upper part of the left slab:

The upper part of the central slab:

The upper part of the right slab:

Translation: To the memory / of six million martyrs

The middle part is taken by the names of the members of congregants' families who perished in the Holocaust written in English.

The lower part has an inscription in English: 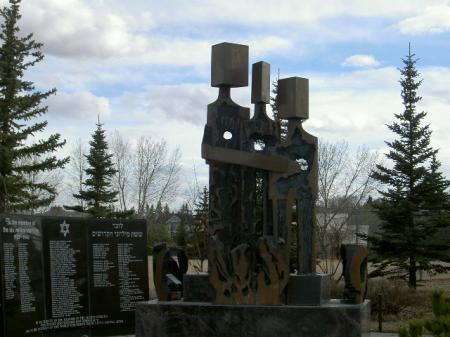 The sculpture "Ashes to life" was designed and sculpted by Roy Leadbeater and was unveiled in 1986.