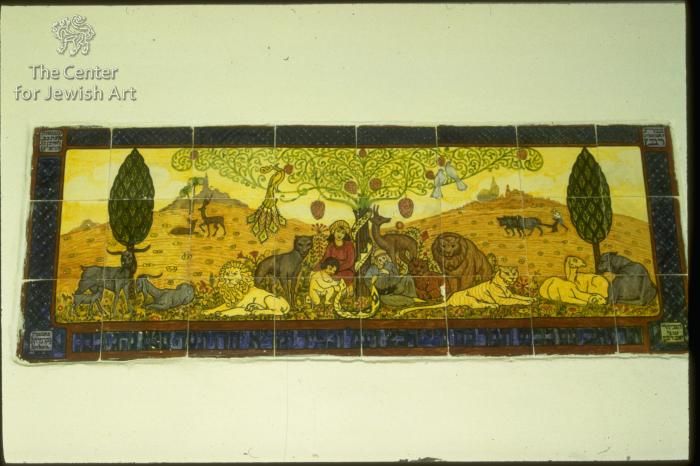 The picture represents in the centre a woman, a man, and a naked child sitting beneath a fruit tree. The tree's top covers most of the upper part of the picture. They are surrounded by different animals. The man seated on the right side, wears a grey garment and a light scarf on his head and plays the flute. To his right a gazelle is standing next to the tree. A red-brown tiger is lying at his feet and next to it a lion and another light coloured tiger. On the left side of the tree, in front of the woman, the naked child is playing with a snake that is tied around the tree. Beside them a tiger and a lion are seated. On the right side of the tree are a couple of doves and on the left, a peacock. At each edge of the picture stands a cypress. Beside the right side lies a bull and two kids. Behind them, in the distance a farmer is ploughing the earth with two mules. Behind the farmer there is a city atop a hill. Beside the left cypress there are two goats and their kid. Behind them in the distance there are two gazelles, one standing and the other lying down. In the distance on a hill there is a city.

Inscriptions, appear in Hebrew in the blue frame, at the bottom : "The wolf also shall dwell with the lamb, and the leopard shall lie down with the kid; and the calf and the young lion and the fatling together ; and a little child shall lead them." 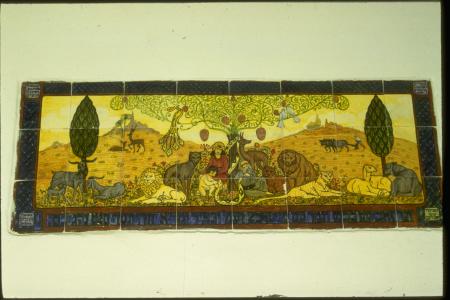