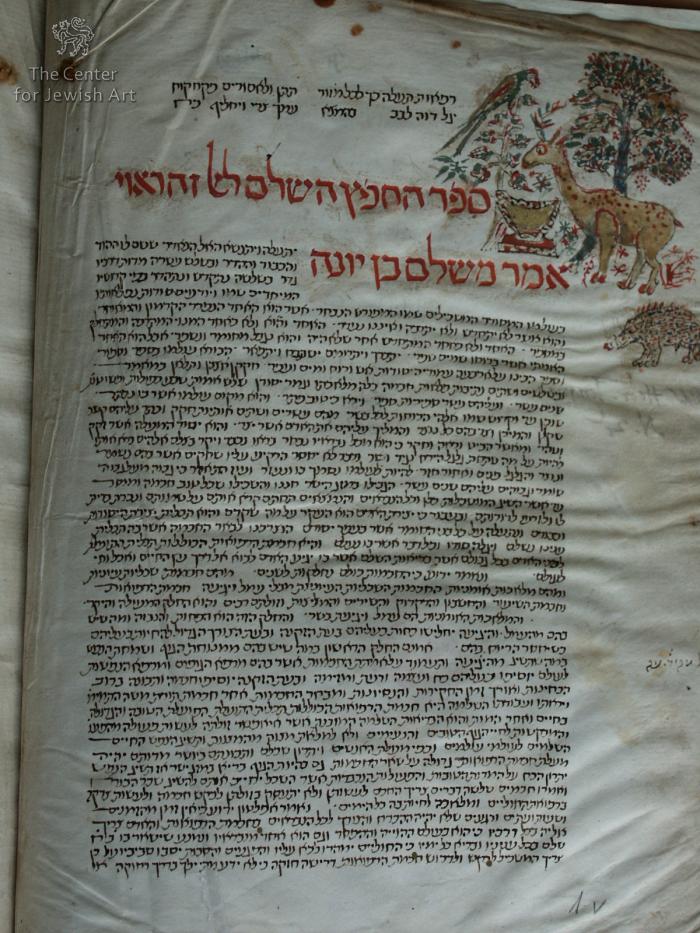 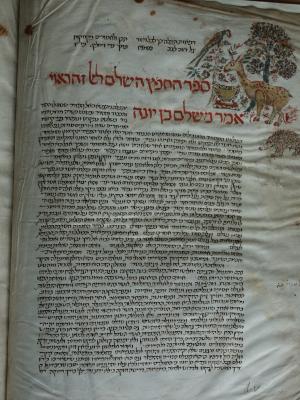 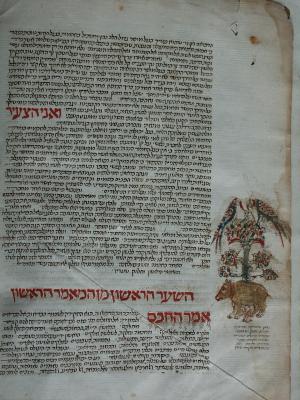 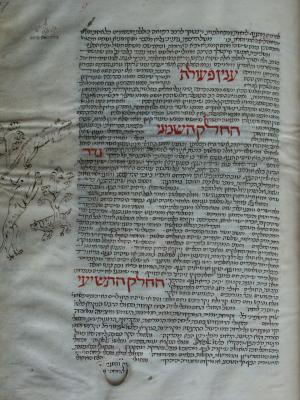 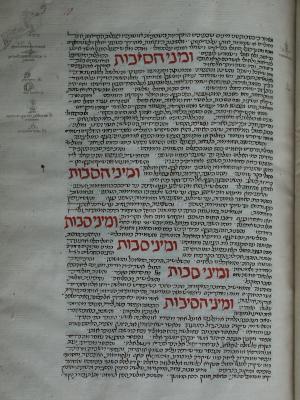 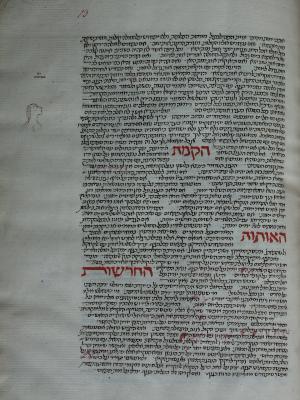 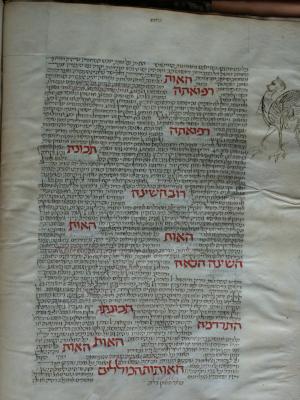 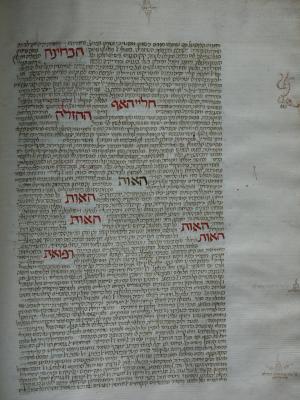 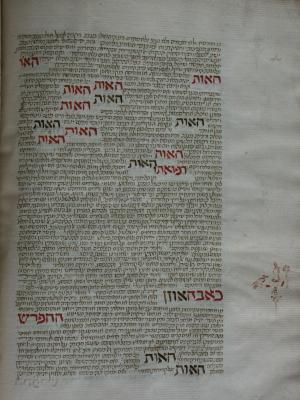 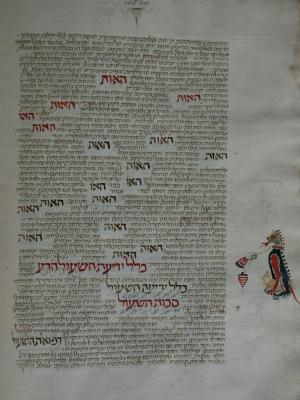 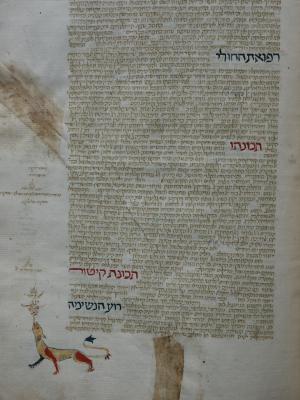 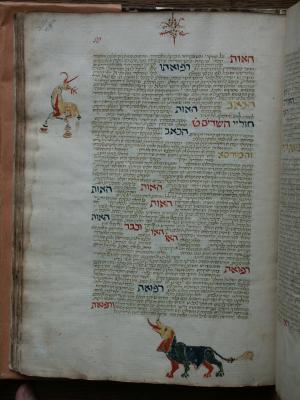 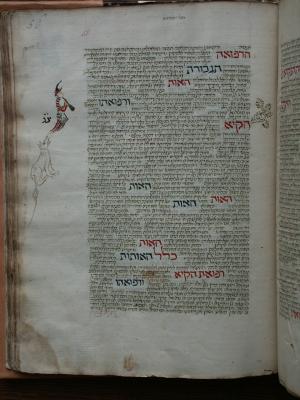 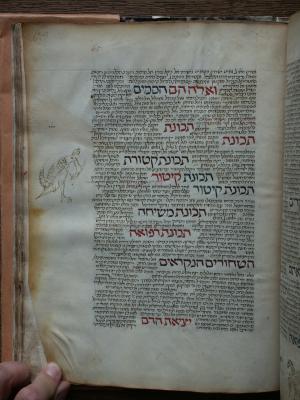 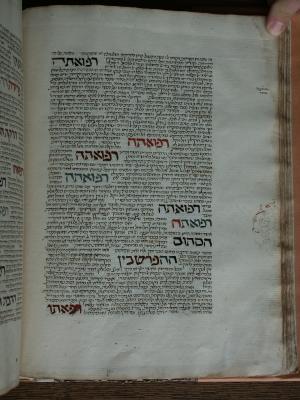 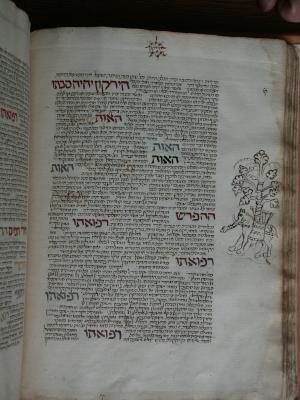 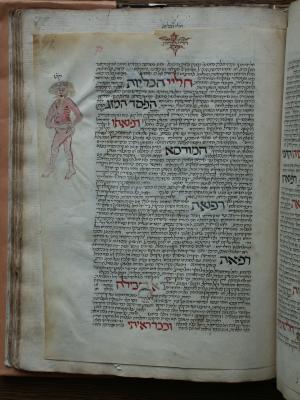 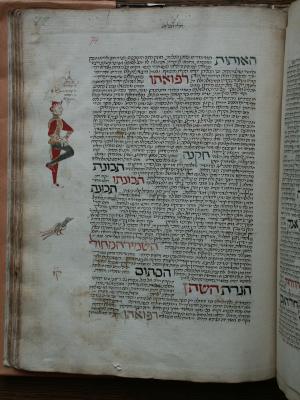 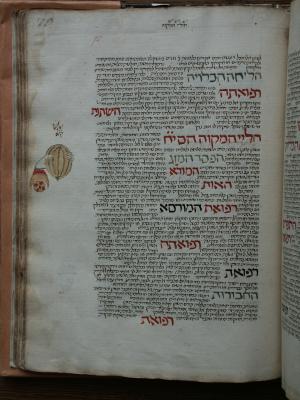 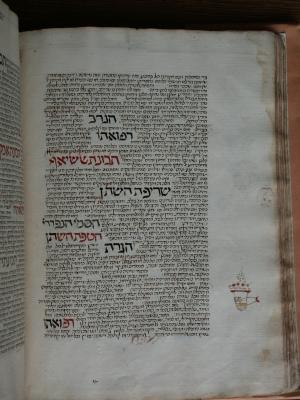 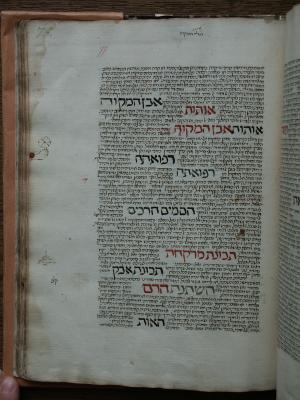 Material:  Parchment and paper II + 134 + II leaves. (Following the red foliation while the pencil foliation is not complete and skipped on fols. 5 & 6 though fol. 7 is foliated 5 and etc.)

It is easy to distinguish between hair and flesh sides of the parchment.

The main text is written in various numbers of lines, mainly between 50- 70 lines per page.

Each quire consists of paper and parchment leaves in which the parchment bifolia are the outer one and the central.

Catchword for each page is written in the middle of the lower margin in semi-cursive script..

19th century binding with a stamp of: “Fr. Hollsteiner Buch binder in Wien.” Dark purple marble paper on the front and back cardboards, with white leather cloth covering the spine and the corners. The spine is decorated with a brown panel inscribed in gold-tooled letters: “Meschullam b. Iona Votum perfecti.” Above it is the Emblem of the Austrian Empire of Franz Josef.

The decoration is made by the scribe.

A. 14 text illustrations including: Parrots pecking a human head (fol. 2v), sweating bust of a woman (fol. 13), man suffering from kidney disease (fol. 73), man jumping to cure his kidney disease (fol. 74), bird flesh or ashes as a remedy for kidney disease (fol. 74), watermelon as a remedy (fol. 75), flask with urine or wine (fol. 75v), anus (fol. 77), androgynous (fol. 88), mermaid giving birth (fol. 88v), baby (fol. 91v), man suffers from arthritis (fol. 93v), herd of animals one should refrain from eating (fol. 97) and blood-letting (fol. 100). Most of the marginal illustrations are in bottle and olive green, ochre, magenta, dark and light blue and brown colours. Some are drawings in brown or red ink.

This medical manuscript copied in the city of Specchia (town in the Italian province of Lecce, Southern Italy) in 1415 contains the text of Sefer ha-Hefez ha-Shalem (fols. 1v-130v) and the beginning of Sefer ha-Shtanim (Book on Urine) (fol. 131v) by Isaac son of Solomon ha-Israeli (Egypt and North Africa, mid. 9th c.- mid. 10th c.).

Sefer ha-Hefez ha-Shalem is the Hebrew translation of the first two treatises of a medical encyclopedia written by the Muslim Al-Zaharāwī, more widely known by his Latin name Albucasis, in the year 1000 (Hamarneh and Sonnedecker, Pharmaceutical View of Abulcasis, pp. 13-22). These two treatises of the encyclopedia comprise the classification of 325 diseases and a discussion of medical treatment for each of them. The whole encyclopedia entitled "al-Tazrif" became one of the most influential medical text books in all of Europe and its parts were translated many times into Hebrew (Steinschneider, Die Hebraeischen Übersetzungen, pp. 745-747). The translation in the Vienna manuscript was carried out by Meshulam son of Yonah, a Jewish physician and translator who lived in the 13th century in Southern France (See: Hamarneh and Sonnedecker, Pharmaceutical View of Abulcasis, pp. 30-31; Lauterbach, "Meshullam ben Jonah", The Jewish Encyclopedia, vol. VIII, p. 503; Muntner, Shem Tov ben Isaac of Tortosa, p. 334).

According to David bar Elijah Nezer Zahav colophon (fol. 130v) and his note on fol. 129v, he copied the manuscript for his own use as a physician in 1415 inאיספקיאה דלמנדוליאה. The previous research's assumption was that the city Ispachia refers to Skopje, the capital of Macedonia(Schwartz, Catalogue, no. 181). This opinion was rooted in the incorrect reading of the word דלמנדוליאה (de la Mendolea) as  דלמצדוליאה (de la Mezdolea), which was translated to Macedonia (מאצדוניה). The re-reading of the colophon with the help of Dr. Binyamin Richler, the former director of the Institute of Microfilmed Hebrew Manuscripts (of the Jewish National and University Library in Jerusalem) lead to the conclusion that the city is Specchia, situated in the province of Lecce in the region of Apulia. In the Middle Ages the city of Specchia was also called Specchia de Preyti de la Mendolea (this name appears in a document from 1511, see: Colafemmina, Ebrei e Cristiani Novelli in Puglia, p. 202, n. 16), which is closer to the correct reading of the colophon, i.e., Specchia de la Mendolea. The title Mendolea was given to the city because of the many almond trees found in the area, or perhaps after the name of the Roman matron – Lucrezia Amendolara, who according to legend founded the city. Therefore, the origin of the manuscript moves from Macedonia, westward, beyond the Adriatic Sea, to the city Specchia, being the only witness to the existence of the Jewish community there at the 15th century.

This manuscript is not the only extant manuscript copied by David bar Elijah Nezer Zahav. He copied and decorated one more manuscript, which is dedicated to astronomy (Vienna, Österreichische Nationalbibliothek, Cod. hebr. 57 (see documentation …). Despite the lack of a colophon, its scribe was identified by Schwartz as David bar Elijah Nezer Zahav on the basis of palaeographical comparison with the script in our medical manuscript. Also one of the owner's inscriptions inserted into its last astronomical table (fol. 111) but missed by Schwartz, supports his suggestion. In this inscription Yaakov Levi de Aragon informs us that the manuscript is of David son of Elijah [Nezer Zahav] (or it is also possible to read as: for or by David…), the physician and the leader of the Lecce Congregation. It was completed in1438 inLecceby Yaakov Levi himself (who completed the astronomical tables on fols. 103v-111, continuing the quire which David started).

David’s father, Elijah [Zebi] ben David [Ibn Muallem] Nezer Zahav (see: Zuckermann, Catalogue, p. 5, no. 37) was also a scribe who copied at least six manuscripts, the earliest one in Vlona in Albania in 1385 (Parma, Biblioteca Palatina, Cod. Parm. 2367) and the rest in Lecce in Southern Italy in 1386 (Torino, Biblioteca nazionale, A. VI. 41. The manuscript was burned. For details see: Palaeographical Project, Y 31), in 1400 (Parma, Biblioteca Palatina, Cod. Parm. 2373), in 1414 (Breslau, Jüdisch-theologisches Seminar, 37. The manuscript was also burned. For details see: Zuckermann, Catalogue, p. 5, no. 37), in 1415 (Breslau, Jüdisch-theologisches Seminar, 60), in 1425 (Oxford, Bodleian Library, MS Mich. 336). According to the colophons of these manuscripts we can learn that till 1414 Elijah Nezer Zahav copied manuscripts for himself, whereas from 1414 (Breslau, Jüdisch-theologisches Seminar, 37 and 60) he copied them for his son David the physician. It is quite possible that around 1414-1415 David really started to practice as a physician in Specchia and later moved to Lecce, where he enjoyed the high position of the head of the community. The subjects of the manuscripts copied by the father and the son are related to Torah, Halakha, Kabbalah, astronomy and of course medicine because of David's profession (for more information see the forthcoming publication Sternthal & Steimann, David Nezer Zahav)

As did David in his manuscripts, Elijah Nezer Zahav also embellished them with refined decoration and with human figures. Unavoidably, David's style is closely related to that of his father. For example, the man suffering from pain in the kidneys illustrating the symptoms of kidney disease in our manuscript (fig. 1) is similar to that of the figure of the scribe in one of Elijah's manuscripts (fig. 2). The similarity between the patient and the scribe is evident mostly in their faces. Both have long oval faces with the beard split in the middle, short hair stylized like a mushroom, closely set eyes and thick arched eyebrows.

Suggested Reconsdivuction
History/Provenance
Leo Lucerna Fol. 1: Two Hebrew inscriptions by Leo Lucerna in dark brown ink inscribed in the upper part of the page: הדואה. א', and on the left (now crossed out by a lighter brown ink): בכרך הזה ספר החפץ לאלזהרי/ וספר הקדחיות לר' יצחק הישראלי "In this volume are Sefer ha-Hefez by Al-Zahrawi and Sefer ha-Kadahiyot (Book of Fevers ) by R. Isaac Ha-Israeli." Sebastian Tengnagles Fol. 1: Notes in Latin by Sebastian Tengnagles (1573-1636), who served as the director of the Imperial Library from 1608-1636. He bought this manuscript for 8 talers and 50 kreuzer, as is indicated in various inscriptions, which are scattered in the page: “Liber rarissimus et inventu difficillimus/ Ex libris Sebastiani Tenganagelii/ Belgae I.V.D. est Caes(aris) Bibliothecae/ praefecti/ MSS. Hebr. Tengnag. N.2.,/ Emptus VIII thaleris et 50 cruciferis”. Two more inscriptions by Tengenagles in this page are in Arabic and In Hebrew. The Hebrew one, at the center of the upper part of the page, is the name of the book: ספר החפץ לאלזהרוי, "Sefer ha-Hefez by Al-Zahrawi". Fol. 130v: A Latin inscription: Dating the manuscript according to the Hebrew year of 5176 to the creation of the world and to the Latin year of 1416 in the city of Ispachia:, “Script(us) iuxta epocham Hebraicam Anno mundo 5176. In civitate Ispachia. A AE. C. 1416" The manuscript was in Sebastian Tengnagles' library together with many other Hebrew manuscripts. In his catalog of 1613 (CVP 9539) our codex appears on fol. 34 as Ms. hebr. 2. It came to the Imperial library of Vienna together with his entire collection, including an exemplar of the Latin version of this medical work, printed in Augsburg in 1519 (ÖNB *69.B.85.). Tengnagles refers to the printed version in our manuscript on fol. 102v: Caesar Auguste, vel Saragossae menho,," The Imperial or Saragosa menho", and mentioned our manuscript on the title page of the printed version. Paris 1809-1814: The manuscript was in Paris as is evidenced by the stamp of the Bibliothèque impériale, on fols. 1 and 131v
Main Surveys & Excavations
Bibliography
Colafemmina, Ebrei e Cristiani Novelli in Puglia: C. Colafemmina, Ebrei e Cristiani Novelli in Puglia le Comunitá Minori, Bari 1991. Hamarneh and Sonnedecker, Pharmaceutical View of Abulcasis: S. K. Hamarneh and G. Sonnedecker, A Pharmaceutical View of Abulcasis Al-Zaharāwī in Moorish Spain, Leiden 1963. Lauterbach, "Meshullam ben Jonah", The Jewish Encyclopedia: The Jewish Encyclopedia, J. Z. Lauterbach, "Meshullam ben Jonah", vol. VIII, New York and London 1901-1906. Muntner, Shem Tov ben Isaac of Tortosa: Muntner, R., "R. Shem Tov ben Isaac of Tortosa on the Life of the Jewish Physician and his Moral Teachings in Europe" (in Hebrew), in Sinai, Jubilee Book, (Jerusalem 1958), pp. 321-337. Schwartz, Catalogue: A. Z. Schwartz, Die hebräischen Handschriften der Nationalbibliothek in Wien, Leipzig 1925. Steinschneider, Die Hebraeischen Übersetzungen: M. Steinschneider, Die Hebraeischen Übersetzungen des Mittelalters und die Juden als Dolmetscher, Graz 1956. Sternthal & Steimann, David Nezer Zahav M. Sternrhal & I. Steimann,"David Nezer Zahav the Physician and his Father: Scribes and Illuminators in Apulia" in Gli ebrei nel Salento (ed. Fabrizio Lelli). Zuckermann, Catalogue: B. Zuckermann, Catalogus Bibliothecae Seminarii jud.-theol. Vratislaviensis, Vratislaviae 1876.
Short Name
Full Name
Volume
Page
Type
Documenter
Michal Sternthal Aliza Cohen-Mushlin- in Vienna | 2003,2004,09.2003
Author of description
Michal Sternthal Ilona Steimann | 2003,12.2003
Architectural Drawings
|
Computer Reconstruction
|
Section Head
Michal Sternthal | 2007
Language Editor
Judith Cardozo | 09.2007
Donor
|
Object Copyright
Österreichische Nationalbibliothek (ÖNB)
Negative/Photo. No.
Edit Obj. ID: 26161