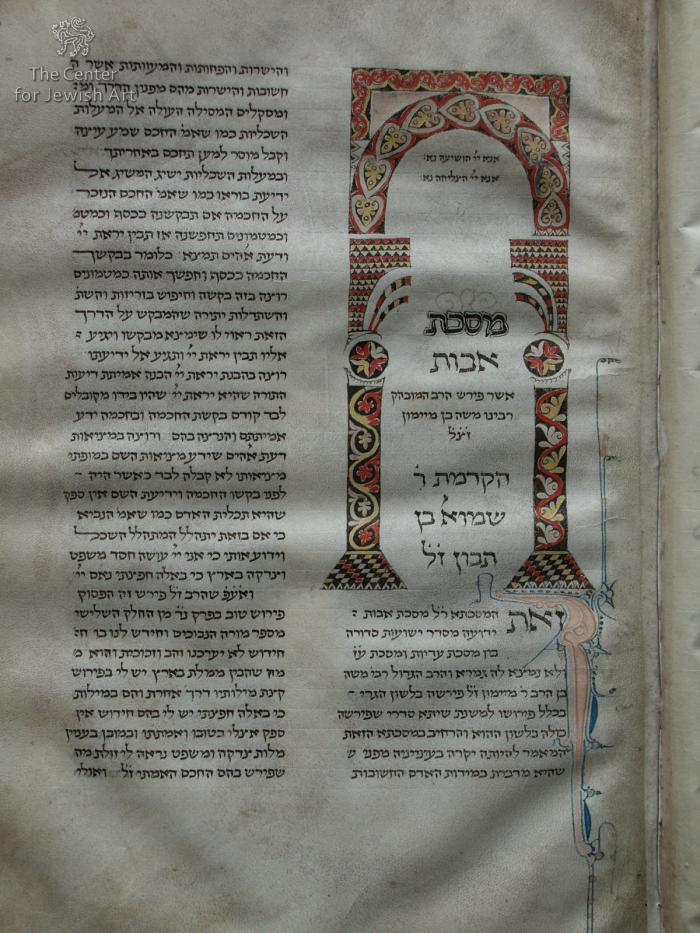 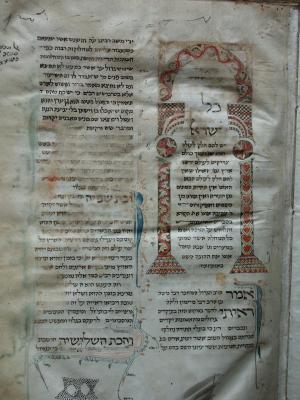 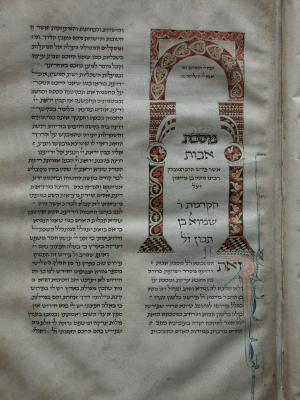 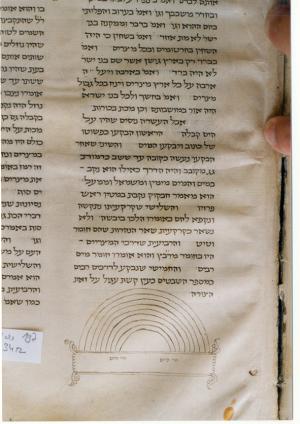 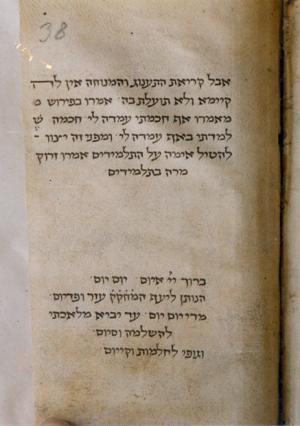 Material: Parchment, I + 38 + I leaves. A clear distinction between flesh and hair sides; the quires are arranged according to Gregory rule, beginning with the flesh side.

Script The text is written in square Italian script in brown ink. Initial words for the main sections and chapters are written in a larger square script (e.g. fols.1-1v).

Columns: The text is written in two columns.

All the texts: 36 lines per page in two columns

Pricking No pricking is discernable.

The "Vienna Maimonides" includes Maimonides' (Moses ben Maimon, Cordova 1135 – Cairo1204) introduction to chapter 10:1 of Sanhedrin (Perek Helek) and to the Ethic of the Fathers, as well as his commentary to the Ethic of the Fathers. All these texts are in the Hebrew translation by Shmuel ben Yehuda ibn Tibbon (Lunel 1150 – Marseille ca. 1230), from the original text in Arabic.

There is no colophon in the manuscript, however on the last page the scribe left a note in which the appellative ha-Mehoqeq (המחקק) is emphasized with dots above the letters (fol. 38). The term המחקק (the "engraver" of letters), alluding to the profession of the scribe, is also the pseudonym of the scribe Abraham ben Yom Tov ha-Cohen (see: Beit-Arié, Cryptic Name, 51-56). It is more than a pseudonym, because its numerical value equals that of the name Abraham (248), which is the number of the positive precepts as well of the organs of the human body (see: Beit-Arié, ibid.).

Scholars (Beit-Arié, “More on the Scribe”, pp. 546-547) have suggested that the Vienna Maimonides was part of a larger manuscript, that included also the Shabbetai’s Moreh Nevokhim (London, British Library, Harley Or. 7586a), whose colophon (fol. 169v) states that the Mehokek copied the volume on Friday, the new moon of Marheshvan in the year [5]044 (22 October 1283) for Shabbetai ben Mattatiyah and his son Yedidiah Shlomo.

Through our research we found a manuscript (Rome, Biblioteca Casanatense ms. 2916; see: Sacerdote, ((מה זה??? no. 167, from now: Casanatense Miscellany) – a miscellany of philosophical and ethical treatises including the Maamar Yikavu Hamaim (מאמר יקוו המים) by Ibn Tibbon. This ethical treatise is mentioned in a 1378 sale inscription on the first page of the  Shabbetai’s Moreh Nevokhim (fol. 2), describing the content of the manuscript as including the Moreh Nevokhim and ending with the Maamar Yikavu Hamaim and “the other books are in the middle”. The Casanatense Miscellany, signed by the Mehokek in two scribal notes (fols. 8 and 101v), is identical to the Vienna Maimonides and to the Shabbetai’s Moreh Nevokhim in the layout of the page, palaeography, style and decoration, and a detailed research have recently proved that the Casanatense Miscellany is the third part of the Vienna-and the Shabetai’s Moreh Nevokhim volumes copied by Abraham ben Yom Tov Hacohen (ha-Mehoqeq) in Rome, in the fall of 1283, and decorated with a uniform program (as explained in all its aspects in the M.A. thesis: Nizza, The Tripartite Miscellany).

Shabbetai ben Mattatiyah, the main patron of our scribe, was a rich Jewish Roman banker who is recorded in Latin documents concerning societies for money-lending in central Italy in 1289 and 1297 (see: Toaff, Commercio, pp. 191 and 195), in a period in which the Jewish money-lenders were developing their status and would reach the importance of their non-Jewish fellows (on Shabbetai ben Mattatiyah see also: Narkiss, Jewish Patrons, pp. 298-301; Busi, Libri e Scrittori, p. 55). The typology of the texts – a Bible, main philosophical Maimonides' writings and various both Jewish and non-Jewish philosophical treatises – that he committed to Abraham ben Yom-Tov ha-Cohen indicates that he was also a pious and cultured man.

The main sections in the London-Vienna-Rome manuscripts are decorated arcades, filled with geometrical and vegetal patterns such as: lobed palmettos and acanthus leaves within heart shapes, scalloped acanthus scrolls; multicolor brick pattern; disc-shaped capitals, etc., executed in ink and painted in red, yellow, off-white and grayish. These arcades with their filling motifs are typical of Abraham ben Yom Tov's manuscripts, recurring as well in the Parma Book of Precepts by Maimonides (fols. 16, 101v), in the Bishop Bedell Bible and in the undated Bible of Parma (ms. Parma 3216).

Some evidences prove that these arcades have been executed by the scribe himself: the fact that they are planned in strict relation with the texts they include, that they are designed with an ink very close to that of the script, and that, as Narkiss has suggested, the appellation of mehokek may be interpreted not only as the “engraver” of letters (Beit-Arié, The Cryptic Name, p. 52), but also as the “limner” (Narkiss, (HIM), p. 139, cat. 46; idem, Italian Manuscripts, no. 5; Narkiss, "Three Patrons", p. 300), as well as the fact that identical arcades in style appear only in Abraham ben Yom Tov’s manuscripts.

The style seems archaic for the 13th century, while it is more typical in the Romanesque manuscripts of the 12th (see e.g. the Gospels from Santa Maria in Trastevere in Rome, London, British Library, ms. Add. 6156; see: Alexander, “A Manuscript of the Gospels”, fig. 2, p. 195). A probable visual source for our scribe seems rather to have been the so called Cosmatesque style, or "flat polychrome geometric patterns", very common in pavement mosaics, in architectonic elements and on liturgical furniture in more than eighty-five Churches in Rome as well as in other sites in Central Italy between the 12th and 15th centuries (see: Pajares-Ayuela, P. Cosmatesque Ornament). This style is characterized by the use of white, red, black, yellow and golden tesserae and by flat geometrical compositions, recalling in meaningful manner Abraham ben Yom Tov's arcades decoration. Particularly enlightening is the comparison with the remains of an altarpiece of the Order of the Cosmati in the Church of Santa Maria dell'Aracoeli in Rome, dated mid 13th century (see: Bonifacio VIII, cat. 163a, p. 214). Other motives that seem have influenced our scribe's style are the roundels enclosing flat geometric and floral motifs, very frequent in the Cosmatesque style, such as in the pavement of the Cappella Sistina in the Vatican (see: Pajares-Ayuela, Cosmatesque Ornament, fig. 4-70), and the decoration of the columns, for instance in the portico of S. Paolo fuori le Mura in Rome (see: ibid. figs 2-231 – 2-233). All these elements indicate to a strong connection between our scribe's style and that of the Cosmatesque workshop, and lead to conclude that Abraham ben Yom Tov was influenced by the visual sources he could encounter in the Roman Capital (see: Nizza, Tripartite Miscellany, pp. 48-50).

The second type of decoration appearing in the Tripartite Miscellany consists of chapter signs including flourishes extending along the text columns, decorating each second heading of the text. The marginal decoration in the Shabetai’s Moreh Nevokhim has additional grotesques, animals’ heads and some floral motifs that do not appear in the other two manuscripts (e.g. fols. 13, 17, 37v, 177v, photo #).  These are very close in style to the pen-work decoration emphasizing the “parasha” signs, some of the Psalms (fols. 455v-457v) and the chapters of the Lamentation scroll (fols. 531, 532-533) in the Parma Bible. Their style recalls pen-work decoration found in Gothic manuscripts of the second half of the 13th century inRome, executed in part under influence of the French style, but no comparison with a specific workshop has yet been identified.

The third type of decoration appearing in the Shabetai’s Moreh Nevokhim, which does not recur in the Vienna nor in the Casanatense volumes – consists of painted frames for headings forming bars and jagged shapes and filled with dragons, foliate and floral motifs (see fols. 5, 5v, 7v). The style of this decoration is close to the painted frames that enrich the two frontispieces in the Bishop of Bedell Bible, and those decorating each opening and ending sections in another Bible housed in the Vatican (Vatican, Biblioteca Apostolica, ms. Ross. 554; see: Zanichelli, 2000, no. 164 for previous biblography). The Vatican Bible was copied in 1286 by Jekuti’el Yehi’el Anav for Menahem bar Moshe the Judge, and punctuated by Benjamin ben Yoav Anav – the same vocalizer of the Bishop Bedell Bible and of the Parma Bible. According to Pace (1985), this type of decoration has strict links with some manuscripts produced in the workshop of the miniature artist Magister Nicolaus (on this artist see: S. Maddalo, “Magister Nicolaus” in: Bonifacio VIII, pp. 99-103), who was active in Rome during the third quarter of the 13th century, such as the Sacramentarium of Anagni (Vatican, Biblioteca Apostolica, ms. Chigi C VI 174; see: M. Bilotta in: Bonifacio VIII, cat. No. 130, pp. 183-184), and seems to have been influenced by French models (see: Zanichelli in: Bonifacio VIII, cat. 164, p. 215). This type of decoration was executed in contemporary with the pen-work decoration, and no strict parallel with other contemporary Latin manuscripts decoration has been found not in the Roman area or in otherCentral Italy regions.

In conclusion, the Vienna Maimonides was originally the second part of a larger codicological and palaeographical unity – the "Tripartite Miscellany", that was formed also by the actual Shabetai's Moreh Nevokhim manuscript in London and the Casanatense Miscellany in Rome. The Tripartite Miscellany was copied in Rome by Abraham ben Yom Tov ha-Cohen for Shabbetai ben Mattatiyah and his son Shlomo, in the fall of 1283. This is a precious testimony of the beginning of Hebrew manuscript decoration in Italy of the last quarter of the 13th century.