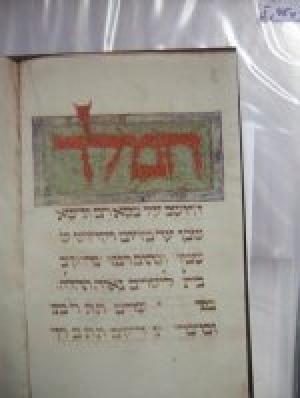 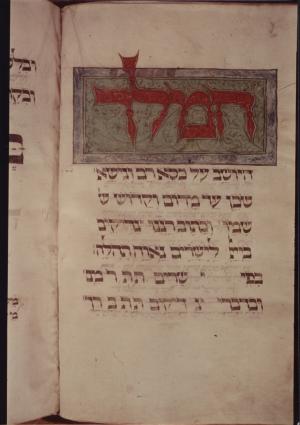 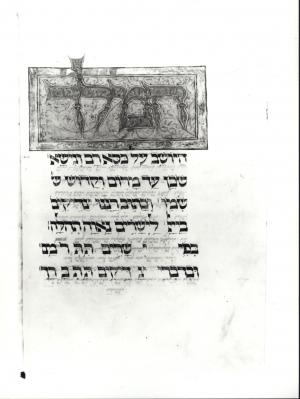 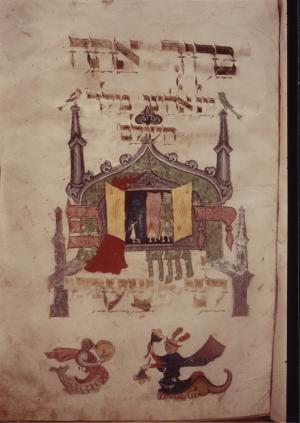 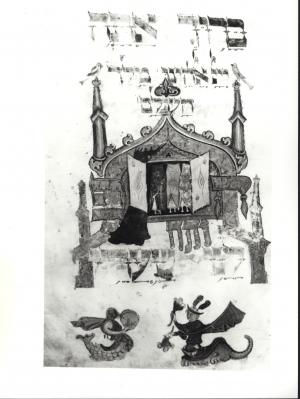 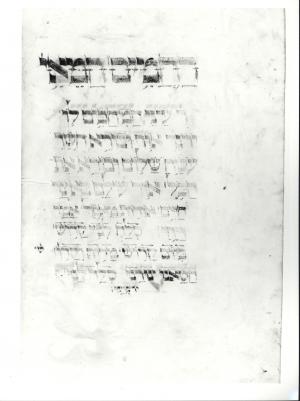 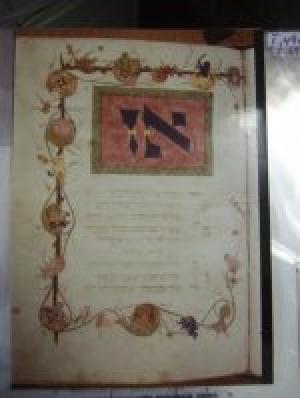 Watermarks: Two flyleaves (vol. I, front flyleaf; vol. II, back flyleaf) have a watermark of an inverted fleur-de-lis similar to Heawood, Watermarks, No. 1557 = Nuremberg, c.1720. In both volumes the difference between hair and flesh sides is hardly noticeable (except for e.g. vol. I: 30v, 389v and vol. II: 230 where the hair side is discernible).

Each volume was copied by a single scribe.

There are striking differences between the scripts of the two scribes, two of which are given here. Isaac Sofer (vol. I) writes his text directly below the ruled line (hanging letters) while the second scribe (vol. II) writes between the lines. Moreover, to indicate the Divine name, Isaac mainly uses three letters yod, whereas the second scribe usually uses only two. Columns Vols. I and II: the text is written mostly in one column. In vol. I the biblical readings and some other texts are in two columns (width of one: 45 mm; e.g. I:218-224v, 358v-360v).

Vol. I: in grey plummet 1 + 2 + 2 vertical lines down the entire page; and 19 horizontal lines, the first, third seventeenth, and nineteenth across the whole width of the page.

Vol. II: In brown plummet 3 + 3 vertical lines down the entire page; and 19 horizontal lines, three pairs of horizontal lines at the top, middle and bottom of the text are ruled across the whole width of the page.

Vol. I: Noticeable in the upper, lower and outer margins.

Catchwords Neither volume has catchwords.

Each volume is bound with thick wooden boards and a red tanned leather spine, with four raised double cords and head and tail bands. The front and back covers of each volume have two groups of four holes made originally for clasps which are now missing

The decoration of the two-volume Mahzor consists of coloured initial word panels, several text illustrations and the Zodiac Cycle in medallions.

Vol. I was decorated by the scribe Isaac Sofer in Ulm, whereas vol. II was decorated in Johannes Bämler's workshop in Augsburg. In addition, two pages in vol. II includes penwork decoration typical of the Jewish scribes and artists of Ulm, Joel ben Simeon (II:268) and Meir Yaffe (II:232v; see Remarks).

The Bämler workshop artist of vol. II used gold leaf tooled with patterns of geometrical or floral motifs. His colours are vermilion, red, magenta, green, blue, yellow, yellow ochre, brown, grey, white and silver powder. The highlights are in white and yellow, the shading in darker hues of the corresponding colours. The panel ground is one colour - red, blue or green - occasionally alternating with gold. The display letters are in gold leaf or in alternating colours. The profiled borders of panels and medallions have tones of two to six colours. Various floral lace patterns surround the frames.

The colours in the first volume are similar to those of the second, although the application is less refined. The shading in the second volume is mostly in black and brown, while the tendrils and some birds are in brown ink (cf. I:49, II:268).

The colour of the gold leaf base in vol. I is magenta, whereas that of vol. II is skin colour.

The initial words for two piyyutim in vol. I, fol. 377v (איתן (הכיר אמונתך)) and fol. 446v (אב (ידעך מנוער)) were never executed and the spaces (8-10 lines high) designated for them were left empty. At a later stage the initial word was supplied in small semi-cursive script.

Vol. II: Categories I-II were executed in Johannes Bämler's workshop probably by Bämler himself, whereas III seems to have been done by Joel ben Simeon or a similar hand; IV was executed in a style similar to that of Meir Yaffe, and V is scribal art (see Remarks).

III. Pen-drawn punning illustration in the margins of the panel (II:268), probably by Joel ben Simeon.

V. Red ink decorations by the scribe on almost every page, including horizontal wavy or vertical curls on the top of letters, or strokes attached to stems and legs (e.g. II:95v, 169, 214, 232v).

The Ulm Mahzor of Munich is a two-volume prayer book for the Day of Atonement (vol. I) and Sukkot (vol. II) following the western Ashkenazi rite with some text following the Swabian-Swiss rite (e.g. I:152v-185; Goldschmidt 1970, II, p. 203). The Mahzor was produced for a wealthy Jewish patron from Ulm, Jacob Mattathias son of Isaac, who is mentioned as the owner in the colophon of the first volume copied by the scribe Isaac Sofer in June 1459 in the city of Ulm. The colophon of the second volume, written by another scribe, as claimed by Narkiss (Narkiss 1991, pp. 30, 35) and Glatzer (Glatzer 1991, p. 144), mentions an ambiguous date "B'R'Ch" (ברך) which indicates either 1459/60 or 1461/62.

This volume too could have been copied in Ulm, since the scribe inserted the name of Jacob Mattathias and his two sons, Abraham and Moses, into the main text as Hatan Torah (II:343v-344, 345v) and Hatan Bereshit (II:351) respectively.

The illumination of both volumes of the Mahzor mainly adorns the initial words with acanthus leaves, dragons and grotesques and set within painted panels. However, the significant differences in style, technique and the use of colours in each volume lead to the conclusion that the illumination of the two volumes was carried out by at least two different artists.

Considering the style, the layout of the page in the first volume is denser than that of the second. Almost no space is left between the panels and the text below them (e.g. I:45v, 69), and the decoration invades the text space (I:69) or is entwined with the text (I:48). In the second volume, on the other hand, several lines separate the decoration from the main text, thus lending spaciousness to the pages (e.g. II:2, 173v, 214, 315v). Furthermore, this volume is painted in vivid colours of red, blue and green, and gold leaf is used for every illumination. The artist of this volume uses clear contours and highlights certain areas of the motifs, giving the illusion of depth to the painting (e.g. II:2). In the first volume, the colours are dull and seem faded, and the use of gold leaf is limited; the inhabited letters are in monochrome colours and the motifs are hardly distinguishable from their background (e.g. I:69). Moreover, in the rare cases of the use of gold leaf (I:49 and 69), it is laid on a magenta ground and has cracked in some places, whereas the gold leaf in the second volume is skillfully laid flat on a thin flesh-colored base (e.g. II:2, 78).

Despite these differences in style between the two volumes, both artists are rooted in the German style of the second half of the 15th century in the region of Ulm and Augsburg. Regarding the art in the second volume, Gutmann was the first to notice similarities to some of the illuminated pages of the London Ashkenazi Haggadah of c.1460 from Ulm (Gutmann 1970, p. 78, and figs. 11, 12). Indeed, a striking similarity is evident between the decorated panel in our Mahzor (fig. 1) and that in the London Haggadah (fig. 2).

Furthermore, in both manuscripts, the gold letters are tooled with large flowers and running dot patterns (e.g. II:173v). The resemblance between the two manuscripts is also evident in the acanthus leaves ending in a loop as well as the raceme of gold or red dots incorporated in the floral decoration (figs. 3, 4).

As mentioned above, the London Ashkenazi Haggadah was copied by the scribe Meir Yaffe (Glatzer 1991, p. 140), and Joel ben Simeon has signed as its painter. Indeed, Joel illuminated part of the London Haggadah, but the illuminations which show resemblances to our Mahzor were executed by an artist identified as Johannes Bämler of Augsburg (Edmunds 1980, pp. 28-29; Beier 2004, pp. 64-65) or from Bämler’s workshop (Zirlin 1995 (Viator), pp. 268-273). Bämler (c.1435-1504) was a Christian scribe, illuminator, bookseller, printer and bookbinder (Narkiss 1991, pp. 30, 35; Edmunds 1993, pp. 30, 38). One of his few signed works is the Double Leaf Art dated 1457. This leaf shows similarity to the art of our Mahzor's second volume: the saint (possibly St. Paul) in the upper left quatrefoil of the leaf (fig. 5) resembles the water-carrier in the zodiac medallion of our Mahzor (fig. 6): both are depicted on a gold ground, have wide faces and pointed chins, heavy eye-lids, and similar modeling around the mouth. Despite the similarity, the figures are not by the same hand: they suggest rather the style of Bämler's workshop.

Written sources of the time do not mention Bämler's workshop or the employment of apprentices or assistants by him. However, a guild protocol of c.1460 mentions that Bämler was the teacher of Thoman Burgkmair, father of the painter Hans Burgkmair (Edmunds 1993, p. 30; Beier 2004, p. 68). Also, the Augsburg tax records for 1463 show that Bämler’s taxes were doubled from the previous year either because of his wife's death or because his workshop was flourishing and could serve Jewish customers such as Jacob Mattathias of Ulm (Edmunds 1993, p. 31).

Bämler was the main painter of the London Ashkenazi Haggadah (Edmunds 1980, pp. 32-33). His artwork was shared with Joel ben Simeon, who must have worked in his workshop and whose style can be recognized in the second volume of our Mahzor. See for example the pen-drawn monkey in our Mahzor (fig. 7), which was executed by Joel in Bämler's workshop (Zirlin, 1995 (Viator), pp. 273, 278; Zirlin 2006, p. 292). The monkey, one of Joel’s favorite motifs, also appears in the Washington Haggadah of 1478 (fig. 8). The delicate acanthus scrolls incorporating human faces in profile, a bird and a rabbit (fig. 7) were likewise executed in Joel’See below, "Additional Remarks"