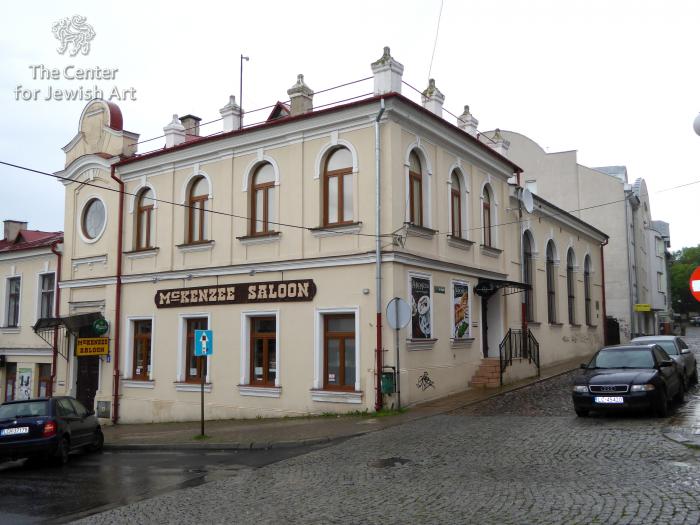 A small synagogue in Chelm was built in the years 1912-1914 from donations of the Jewish population. The brick building was built on a rectangular plan. There was a one-story prayer room and multi-story porches with a women’s gallery and vestibule. Inside the synagogue there are four cast-iron posts that outline a place for the bimah. On the front elevation, an asymmetrically situated entrance with an oculus and the Decalogue is visible. Characteristic elements for the synagogue are semicircular windows. Near the synagogue, the rabbi’s house remains as it has been preserved. It was built in 1914. Currently, it is a dwelling house. The synagogue is situated on the corner of Kopernika and Krzywa Streets.

During the Second World War, the German army partly burnt down a synagogue. In 1955, part of the building was rebuilt and it was used as a flour warehouse. In that time, a few rooms were occupied by a Jewish family, who turned it into a prayer chamber. In 1984, the building was owned by the Polish Federation of Engineering Associations (NOT). During the years 1984-1987, the Social Committee of Building renovated the synagogue. In June 2004, the Polish Federation of Engineering Associations decided to sell the building with the encouragement of other Jewish Religious Districts with a seat in Warsaw. Finally it was bought by a private entrepreneur.

The new purchaser did not reveal his name for some time. A local newspaper advertised organizing weeding parties in the synagogue. On the 1st of April 2006, the building’s owner put on the front wall of the building a wooden beam with the inscription „McKenzie Saloon”. Inside the synagogue there were colt’s replicas, cowboys hats and photos of Indian chiefs. This provoked a protest of Jewish communities in Poland and abroad. The committee of Chelm in Israel, which gathers former inhabitants of Chelm, submitted a letter to the then mayor of Chelm - Krzysztof Grabarczyk. Despite criticism expressed by the Heritage Conservator , the former synggogue is now housing a restaurant and weddings are organized there. In Chelm’s Tourist Information Center there is a plaque financed by the European Union, which describes the history of the synagogue. The plaque was to be part of a Chelm monuments tourist trail but the owner of the building of the former synagogue does not permit it to be displayed.