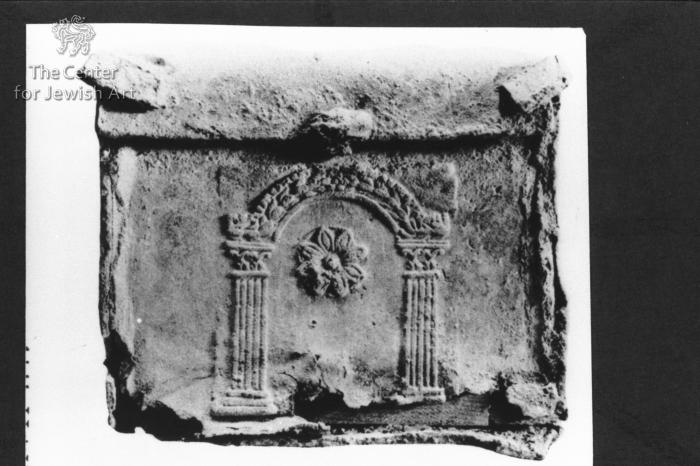 © Center for Jewish Art, Photographer: Unknown,
The coffin has a rectangular form, with a flat rectangular lid. The long sides of the coffin are decorated by two parallel bands of inhabited Trailing vine scrolls along the outer edges. Between them is a register of intersecting diagonal lines of bead and reel pattern forming six rhombi and triangles. The two inhabited Trailing vine scrolls bands comprise of leaves, tendrils, clusters of grapes, and birds perched on wide bowls. Each rhombus and triangle contains an eight petalled flower, with a knob in the center. One of the narrow sides of the coffin is decorated with an architectual design with an arch supported by two fluted columns. Inside the arch is an eight-petaled rossette with a knob in the center. The arch is decorated with garlands of laurel leaves interwoven with ribbons and a small rossette in the center. The columns are with Attic bases. The Corinthian capitals contain leaves, tendrils and intervening rosettes. register of Each rhombi contains a eight petaled flower. The inhabited Trailing vine scrolls bands are similar to the ones on the long sides. Along the lenght of the lid two parallel bands of inhabited Trailing vine scrolls. Between them are four intersecting bands, containing the same pattern of vine scrolls, which form a large rhombus in the center, borded by triangular fields. Inside the rhombus and in each of the four triangles are three flowers with eight petals. Within the triangles at the narrow edges of the lid is also a flower. 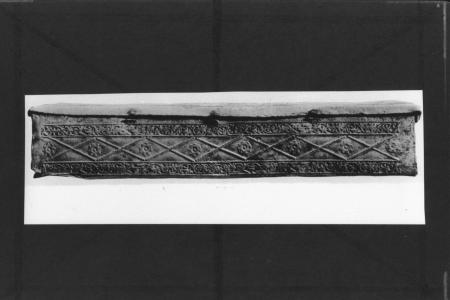 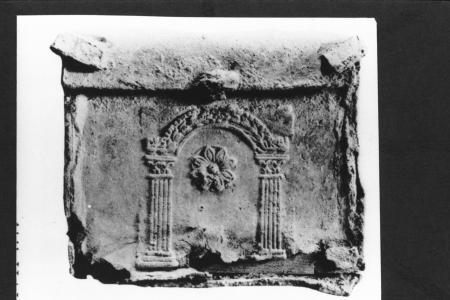