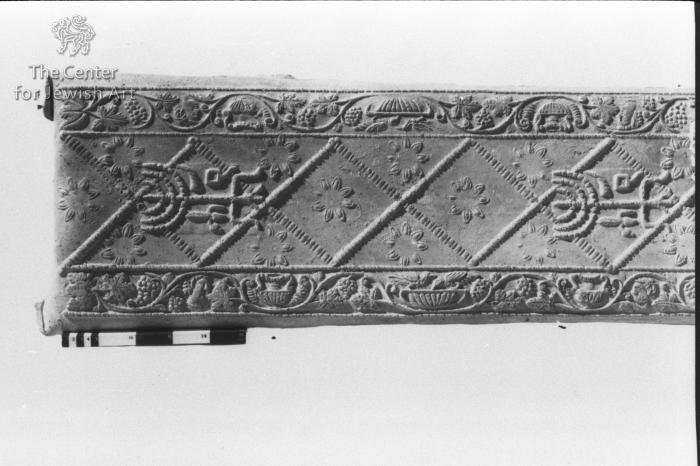 © Center for Jewish Art, Photographer: Unknown,
The coffin has a rectangular form, with a flat rectangular lid. The two long sides are decorated with the same pattern, that appears also on the lid, with slight changes. Only one of the narrow sides is decorated. The long sides of the coffin are decorated with three registers. The central register is decorated with a repeating pattern of intersecting diagonal lines in bead and reel pattern, forming rhombi and triangles. In three of the seven rombi, a Menorah impression was added (on the first, the last and the central rombi). The Menorah is composed of six curved branches with central shaft, and stands on two legged base. The seven branches are composed of rounded links that culminate in flames. Within each of the rest four rhombi and the triangles is a flower with eight petals in a circle. The upper and the lower registers are decorated with the same pattern: a band of Trailing vine branch, bearing tendrils, leaves and clusters of grapes. The trailing vine is inhabited with a repeted motif (twice in each band): A robustic face with sharpened ears (Satir?) in profile is depicted four times: One on each side and facing the center, and two in the center, facing them. Between them is an alternatly repeating pattern: an amphora and a broad hemispheric ribbed bowl with two birds standing on the rim, one bird is bending to drink and the other one is stretching its head forward. One of the narrow sides of the coffin is decorated with an architectual design with an arch supported by two pillars. Inside the arch, is a menorah flanked by the mahta and a shofar to the left, and the four spieces to the right. The two pillars are fluted, their bases are composed of three fillets and Corinthian capitals. The arch is decorated with a design of laurel leaves and a small rossette in the center. The Menorah is almost identical to those on the long sides,exept for a three legged base, which two lateral legs bend toward the outside, and the central one splits into three. The Mahta has a square scoop and a crooked handle. The four spieces are depicted together in a bundle, among them is an Etrog(?). The lulav branch is with closed leaves. The decoration along the length of the lid is similar in its arrangment and its decoration to the one on the long walls of the coffin. The number of the rhombi is nine, and their shape is not elonged as the rhombi on the long side. The Menorot and ritual vessels are similar to the one described on the narrow side, and they are arranged vertically.
Summary and Remarks 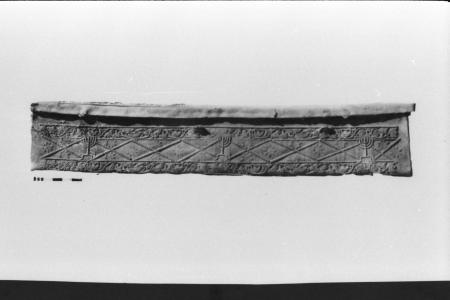 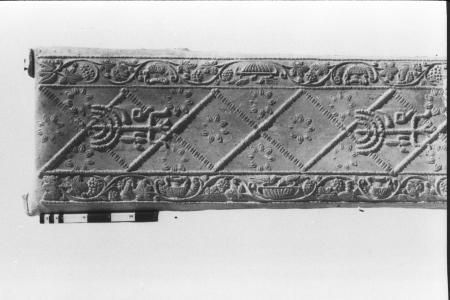 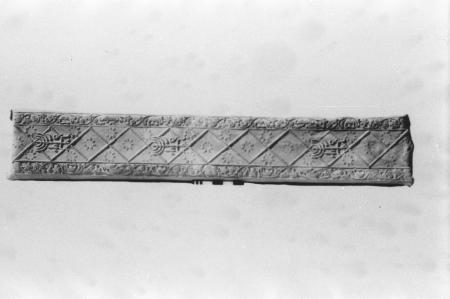