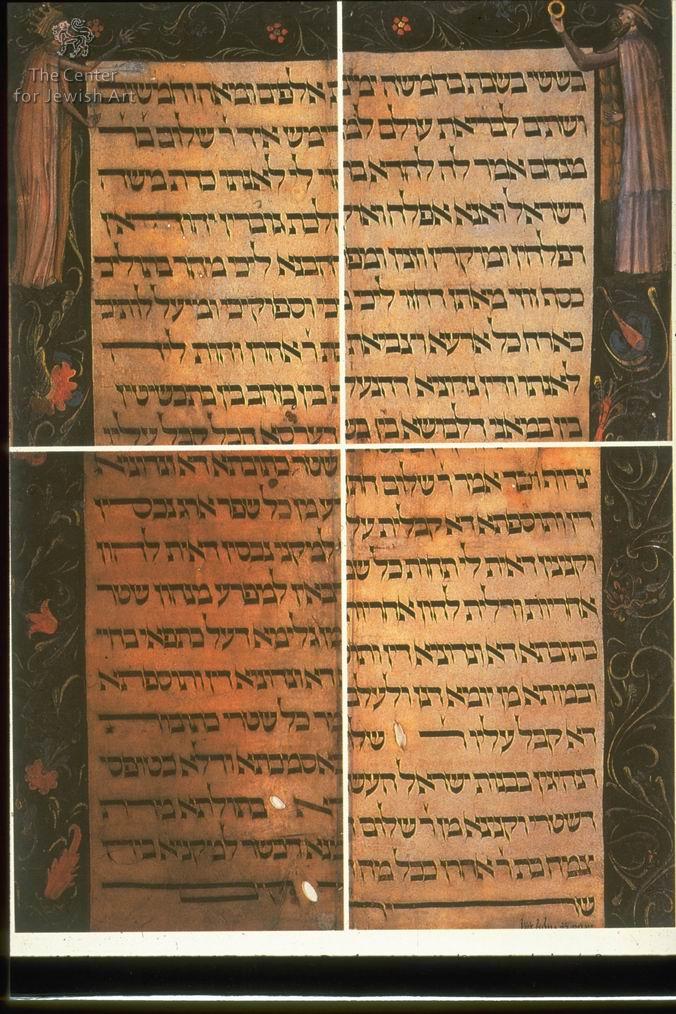 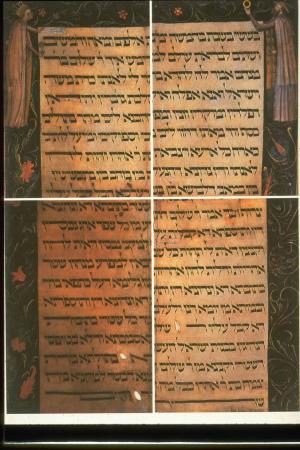 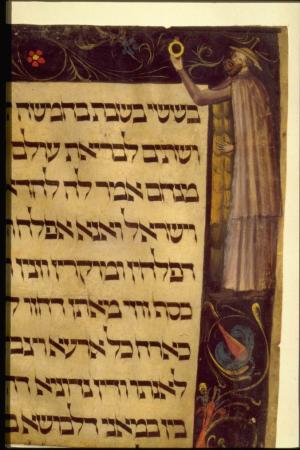 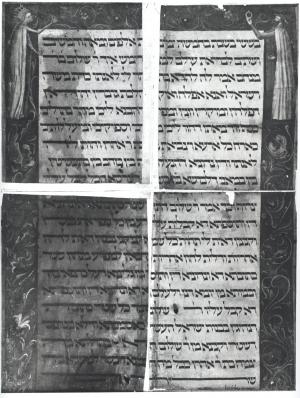 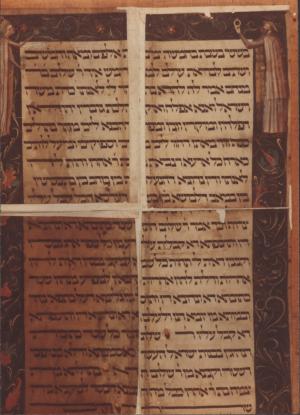 Material: A sheet of parchment now cut into four pieces and glued to a thick cardboard, thus it is impossible to see the back side of the parchment.

Ruling by plummet 1+1 vertical lines (discernible in the upper pieces).

The four pieces of the Ketubbah are glued to a very large cardboard (770x 700mm) covered by another cardboard with four “windows” exposing the pieces. The cardboard is kept in a box.

Floral frame with the figures of a bride and a groom on top (see detailed document).

The Krems Ketubbah includes the traditional text of the ketubbah recording the marriage between Shalom son of R. Menahem and his virgin bride Zemah daughter of R. Aaron, wedded on Friday, in the year 1391/2, probably in the city ofKrems inLower Austria.

The ketubbah was found cut into four pieces, with the two upper pieces placed inside the binding of a 15th century Latin manuscript. The extant pieces comprise almost the entire ketubbah but there are still small sections that are missing. In the centre from top to bottom approximately four words on each line are missing; and three lines of text are missing across the middle of the ketubbah. By reconstructing the missing text and decoration, it would seem that the ketubbah was most likely large and rectangular in form (probably originally measuring ca. 740 X600 mm).

Some details are missing from the text: the month of the marriage was cut off from the first line; the amount of the tosefet ketubbah was cut off from the three missing lines across the middle (after the 9th line) and the name of the city where the marriage took place (second line of the upper left piece) was almost completely cut off, with only the ending left, reading “רימש” (Rems). This ending led researchers to conclude that the contract was written in the city of Krems, written “קרימש” in Hebrew. The city of Krems had a prominent and flourishing Jewish community during the thirteenth and fourteenth centuries. Schwartz suggests that the bride's father Aaron is Aaron of Krems mentioned in a record from 1364 (Schwartz 1913, p. 23), and the groom, Shalom son of Menahem, is Shalom son of Tröstl (Menahem) from the Viennese Walich family which is mentioned in the Viennese records from 1381-1398. Therefore it seems plausible that Krems is indeed the place of marriage originally inscribed in the ketubbah..

We assume that as a result of the expulsion of the Jews from Krems in 1421, the ketubbah was no longer in Jewish hands and not long after this, in 1440, it served a secondary use as part of the binding of a Latin manuscript.

The Krems ketubbah is highly important to the research of Jewish art, as it is the earliest known illuminated Ashkenazi marriage contract and also the earliest ketubbah depicting human figures. Most of the medieval marriage contracts from Ashkenaz up to the twentieth century were written on paper or a small piece of parchment on which only the formal text appeared without any illuminations or verses. David Davidovitch (Davidovitch, Illuminated Ketubbot, col. 930) suggests that the ketubbah of Krems is proof of a custom of illuminating marriage contracts in Ashkenaz of which, unfortunately, only this one example has survived. On the other hand, Shalom Sabar (Sabar, Beginning of Ketubbah Decoration, p. 101, n. 41) claims that Ashkenazi Jews did not place great value on the ketubbah and therefore it was not commonly decorated. Indeed, the original function of the ketubbah as a safeguard against facile divorce was reduced by the ordinance of Ashkenazi Rabbi Gershom ben Judah Me’or Ha-Golah (960-1028), which prohibited divorce against the will of the woman. Moreover, the Ashkenazi ruling for stating a fixed amount on the marriage contract decreased the public interest in hearing the contract read aloud and therefore it carried less importance. Therefore, it would seem more probably that as Sabar claims, the Krems ketubbah is a unique example of illuminated marriage contracts from Ashkenaz.

The elongated bride and groom and their graceful figures recall the Gothic International Style of around 1400 that spread throughoutEurope. However, it is difficult to pinpoint the exact school of illumination of the decoration of the ketubbah but it may have been illuminated in the city where the marriage most probably took place, in Krems.