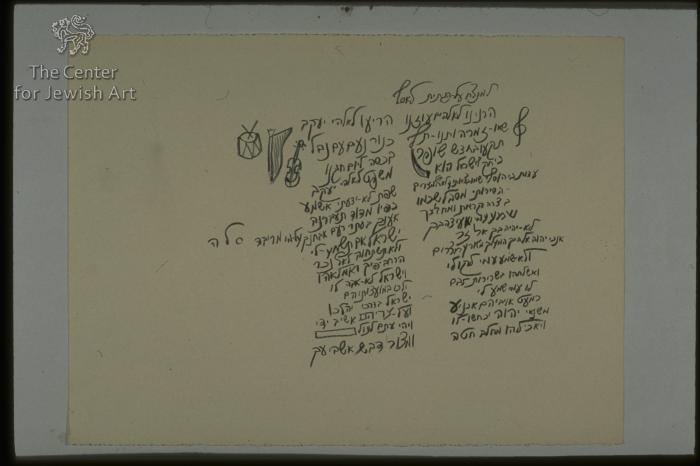 Psalm 81 is written on both the right side and center of the sheet in two columns. Each column has 16 lines that complete each other. Mostly of this appears on the right half of the yellowish sheet, with an additional line written above the column on the right. The opening line of the Psalm is written above the column on the right as follows: "To the chief Musician upon Gittith, A Psalm of Asaph" (81: 1) The three lines below it (verses 1-4) are written in larger letters (20-25 mm per letter) than the remaining verses. "למנצח על -הגתית לאסף" A large treble clef is depicted at the begining of the second line in the right column illustrating the words: "Take a psalm" (81: 3, KJ 2). A modern violin, harp, and tin drum with sticks are depicted by lines 2-4 in the left margin by the column on the left illustrating the rest of verse 3: "and bring hither the timbrel, the pleasant harp with psaltery." A shofar at the end of lines 3-4 of the right column illustrates the words "blow up the trumpet in the new moon" ( 81:4, KJ 3). The final letter Mem of the word "forever" (81: 17, KJ 16) on line 16 of the left column is shaped like an elongated rectangle and serves to fill and complete the line. Th number 81 is written on the reverse side of the sheet in Hebrew cursive letters in the lower right corner. "פ"א" 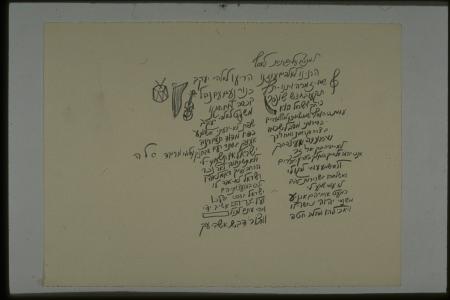