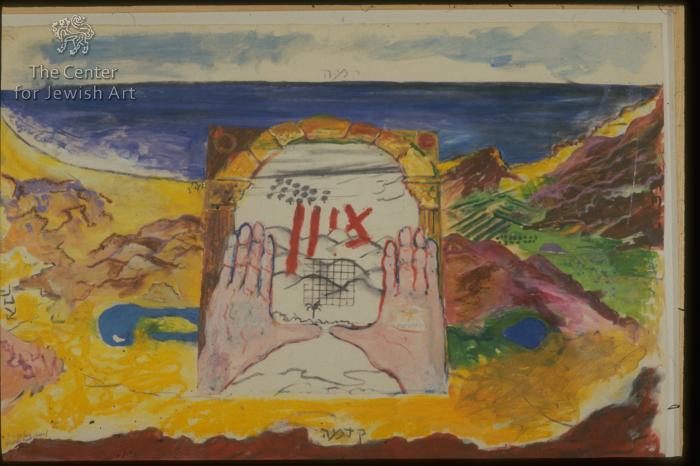 A map of Israel is represented from the east. On its center is mounted a square picture, concealing the Jerusalem area, part of Jordan valley, and the coast until the Mediterranean Sea. The Indigo Mediterranean Sea is represented as a bowl in the upper part of the picture. The upper right side of the map depicts the brown slopes of the Upper Galilee mountains, along the narrow yellow coast of west Galilee, reaching brown Mt. Carmel. Below the Galilee mountains, the Israel valley is depicted with stripes representing the ploughed fields. The brown lower Galilee mountains are erected above the valley bordering the deep blue Sea of Galilee and the beginning of the Jordan valley. The picture in the center depicts two palms whose thumbs and attached fingers create a square shape under a drawing of gridded Judea mountains and the Hebrew block, red letters above them: ציון/Zion. Above the word are pencil lines of dots representing the fields of the Sharon region and the contour of the coast line. In the upper part of the picture a stone yellow-brown arch completes the frame created by the palms. The left side of the map depicts the low light brown mountains of the Negev scattered in the yellow plain of the Negev and Arava and part of the light blue Dead Sea, with the pink mountains of Eilat at the extreme right. On the right margin of the map, between the Eilat mountains and the Negev dunes is written in Hebrew block, black letters: נגבה. This word can be interpreted as "to the South", or "to the Negev". The lower margins of the map depict the reddish brown mountains of Edom surrounded by the same yellow with a word written in Hebrew block, black letters in their center: קדמה/Eastward. 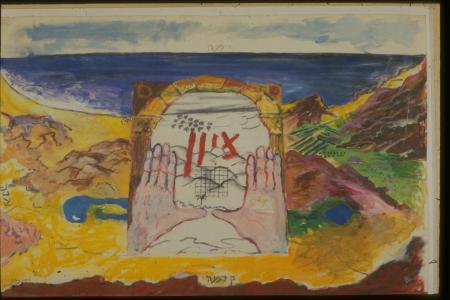