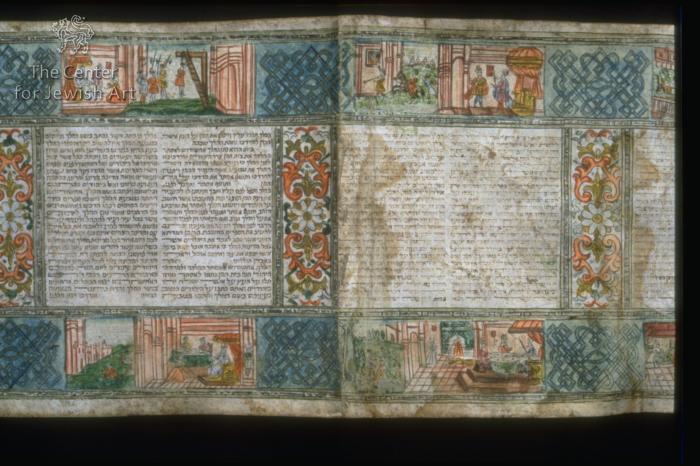 Frame 11 (text panel 6 - upper margin): On the right, Ahasuerus stands next to his throne and points at Haman who stands before him as they talk (Es. 6:6-10). On the left, Mordecai rides a horse followed by two men and Haman walks before him while blowing a trumpet (Es. 6:11). The scene of the triumph of Mordecai is supplemented by the depiction of Haman's daughter who, from a window above, empties a chamber pot on her father's head (Megillah 16a).

Frame 12 (text panel 6 - lower margin): On the right is the second banquet given by Esther (Es. 7:1). The queen sits at a round laid table and is accompanied by Ahasuerus, who sits on the throne topped by a canopy, and by Haman, who sits between them. In the central part of the frame, Haman begs for his life and is prostrate on the floor before Esther while Ahasuerus is returning from the palace gardens (Es. 7:7-8). On the left, Ahasuerus stands in the palace garden with a scepter in his hand and is accompanied by two chamberlains; one of them may be Harbonah, who suggests hanging Haman on the gallows he had prepared for Mordecai (Es. 7:9).