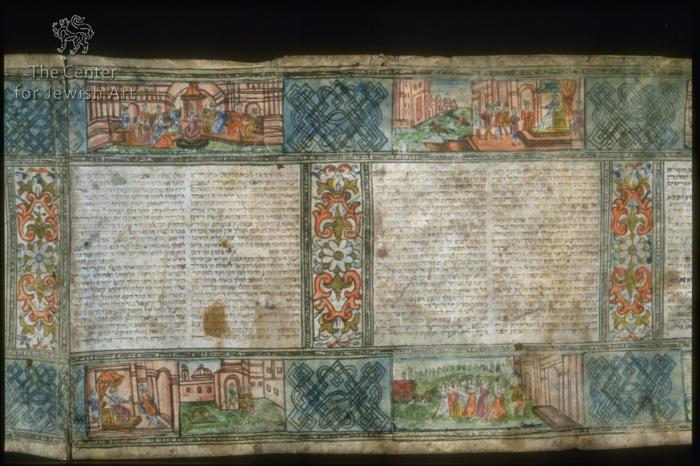 The second and third text panels are surrounded by a printed and colored border including:

Frame 3 (text panel 2 - upper margin): On the right, the bearded Ahasuerus sits on the throne on a platform, accompanied by the seven men who are princes of Persia and Media. He holds a scepter in his left hand and his other hand points to a man, probably Memucan, who stands before him. Six other men stand behind Memucan (?), and a soldier holding a shield stands behind the king's throne. The scene shows the moment when the king asks his advisers for a piece of advice as to the further fate of Vashti (Es. 1:13-20). On the left, two king's messengers ride on horseback towards a city in the background (Es. 1:21-23).

Frame 5 (text panel 3 - upper margin): In the center, the bearded Ahasuerus wearing a turban is seated on the throne with a canopy and is flanked by eight men in turbans who sit on benches (four on either side). Both hands of the king are outstretched and in one of them, he holds a crown which he is about to place on the head of the kneeling Esther. Behind her, four women stand (Es. 2:17).

Frame 6 (text panel 3 - lower margin): On the right, Mordecai stands within a gate in the wall and looks at two men who are probably Bigthan and Teresh (Es. 2:21). On the left, Haman is approaching Ahasuerus who is sitting on a raised throne with a canopy. The king holds a scepter in one hand and in another he has a ring that gives to Haman (Es. 3:10). A man, possibly a guard, stands behind the throne. There is a fountain in the center.