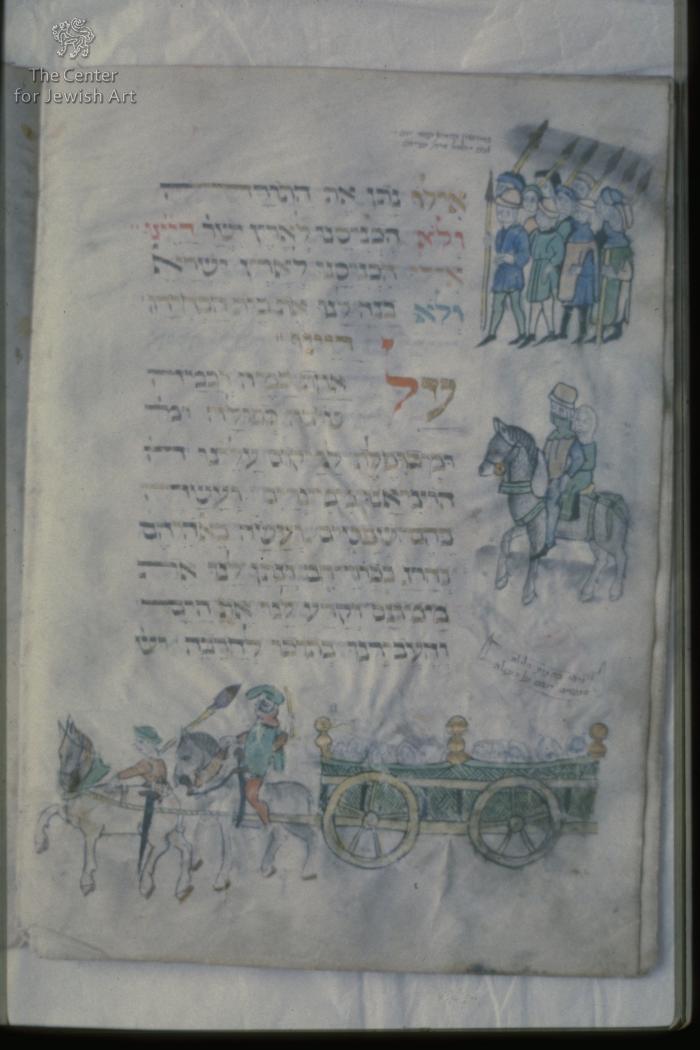 The Israelites leaving Egypt (Ex. 13:18-22) illustrate the two facing pages (19v and 20) in their outer boarders. In the top outer margins is a group of Israelites armed with spears (based on Ex. Rabbah (Vilna), 20:19; Jeru.Tal., Shabbat, 6:8; Rashi on Ex. 13:18). Below them is a couple riding a horse, while in the lower margin is a carriage carrying people pulled by two horses with riders. Inscribed on top:

"In the first (month), on the fifteenth day, the Israelites were redeemed."

The procession of the Israelites continues in the bottom right margin, from right to left. Two men are leading loaded asses and one of the men carries a spear. In front of them is a woman with a cradle containing an infant on her head. Two children are walking beside her while a man is walking before her carrying two children in a basket, hung on his back. A woman carrying a bundle on her head is in the front. Inscribed above her:

"All the Israelites congregated and a mixed multitude came also out with them (Ex.12:38)."

In the outer left margin is another couple riding a horse, while a bear is watching between two trees (see: Remarks). Inscribed above:

It is possible that the bear in our haggadah, represents the land of the Philistines, alluding to the bear and the lion king David had killed, before his battle against Goliath the Philistine (I Sam. 17:34-37).