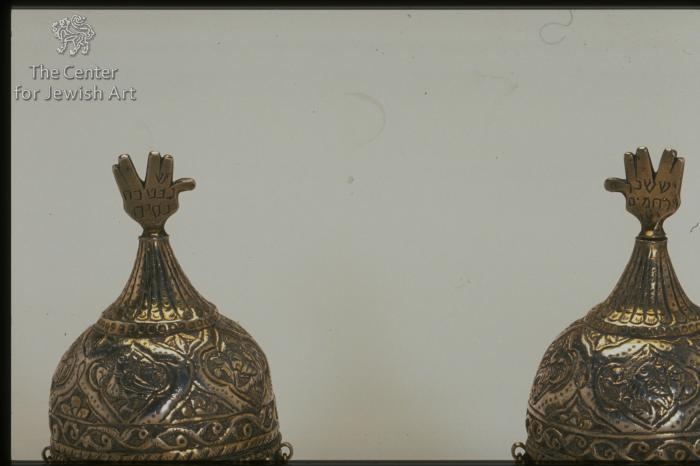 The ovoid gilded silver rimon consists of a shaft, a body and an apex. The cylindrical shaft tapers upwards and bears a ring on its bottom. The shaft is surmounted by an elongated capital composed of three sections. The lower section has the shape of a pear and is encircled by two decorative registers.Alternating crescents and dots on the concave part and foliate scrolls on the base. The central section has a compressed globular shape and is divided in two registers encircled by foliate scrolls decorations. The upper unit is plain and composed of a circlet with petals radiating from its centre. The sections are separated by rings.

The ovoid body is composed of two bowl shaped parts facing each other. A row of twelve rings, from which hang twelve chains with grooved bells, surrounds its centre. The lower part of the body is divided into three registers with foliate scrolls decorations which encircle the body. The upper part of the body bears six different depictions of birds within cartouches flanked by floral patterns. These are mounted over a band of foliate scrolls which encircles the body. The body terminates in a cut cone decorated with petals radiating downwards from the apex. The apex is in the shape of a hand in Cohanim's Benediction, in coordination with its pair, facing each other by the thumbs. Both hands bear the same dedicatory inscription in square linear letters which is read on one side of the hand and continued on the other, as follows:

"...Nissim Issachar and Rachamim may his Rock and Redeemer protect him."

One Rimon shows a slight change on the dedicatory names. Instead of "Rachamim", there appears "Khachs"[?].