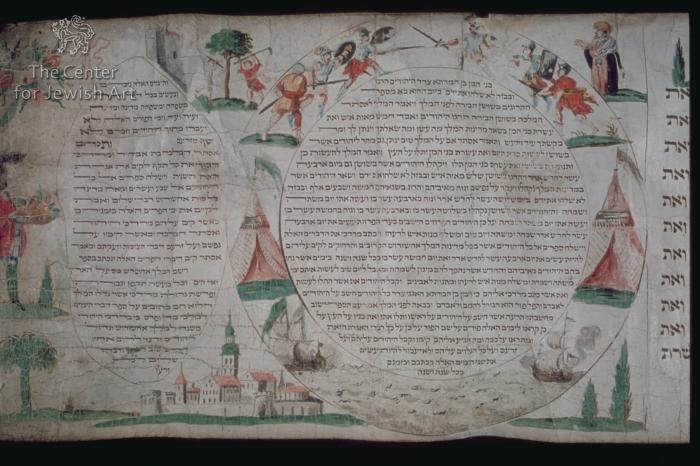 The eleventh roundel is decorated with a scene showing Jews battling their enemies (possibly Es. 9:5-12), tents, and ships (possibly alludes to Es. 10:1).

On the left, a figure of a man (possibly Mordecai) and trees can be seen.

The twelfth text panel is irregular and resembles an elongated oval.

Between both panels, two depictions are painted. In the upper part, there is the scene based on a midrashic addition to the story found not in the Book of Esther but in the tractate Megillah 16a. According to this tale, after Esther disclosed Haman's wicked intentions during her second banquet (Es. 7:1), the furious king left the chamber for the palace gardens, where he saw the trees being chopped down. Depending on the version of the story, the trees were cut down either by the sons of Haman or by angels disguised as them (in all artistic representations, the figures are depicted as wingless). Below it, there is a walled city.

The scroll is preserved in good condition, although its final part is damaged - the membrane is crumpled and the decorations are slightly visible.

The scroll is formed of 4 sheets, in total containing 12 columns of text with 23-26 lines of different lengths, except for col. 10 which has 11 lines divided into two half-columns.

The text is written in Hebrew square Ashkenazi script in dark brown-black ink on parchment membranes.

The letters ח (Es. 1:6) and ת (Es. 9:29) and the letters of the name of God are enlarged and bolded. Other enlarged and diminished letters are included in col. 10.

It seems that this scroll and two other scrolls featuring the same style (see "Related objects) were executed by the same artist, although two of them are decorated with roundels while the third one is decorated with octagons.