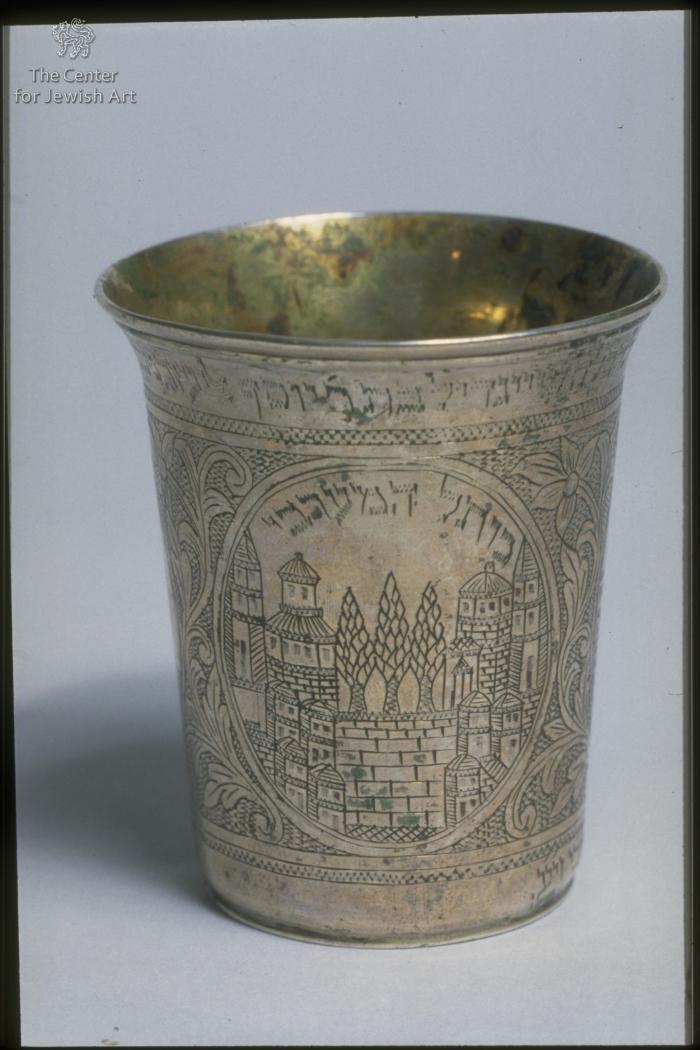 The Kiddush cup is cylindrical and tapers at the bottom. It is decorated with a wide band containing three oval medallions which are surrounded by an undulating foliate branch. Each medallion contains one of the following: the Western Wall; the Cave of  Machpelah; the Tomb of the Kings of the Dynasty of David (read clockwise). The title of each place is inscribed above them in the appropriate medallion.

The central band is surmounted by a band that bears a dedicatory inscription is square filled letters circumfering the top of the cup, it reads:

Translation: An offering from the holy city of Safed, to the bride Sheindl daughter of R. Yosef Eliezer Nisboim, from me Sheindi daughter of R. Zecharia Zeev.

A second inscription circumfering the bottom of the cup reads:

Translation: From the money of the lightning for Rabbi Shimeon Bar Yohay, his memory protect us.

According to William Gross, the so-called "Zfat Cups" were mostly brought without decoration from Europe, as indicated by the silver hallmarks, and were engraved in Eretz Israel with vignettes of Holy sites. The common knowledge is that such cups were fashioned in the city of Safed and hence their common name. The earliest dated cup is from 1881, so it is probable that they were made in the last quarter of the 19th century and the first quarter of the 20th. A number of existing examples have personal dedications, but it seems that they were purchased as souvenirs of the Holy Land as well.

Most of these cups, of the later types, carry an almost identical design, while earlier examples showed more original variation. The objects of the later type are quite a standard form. The Holy sites depicted here are the Kotel, the Holy city of Safed, and Mount Zion in Jerusalem.