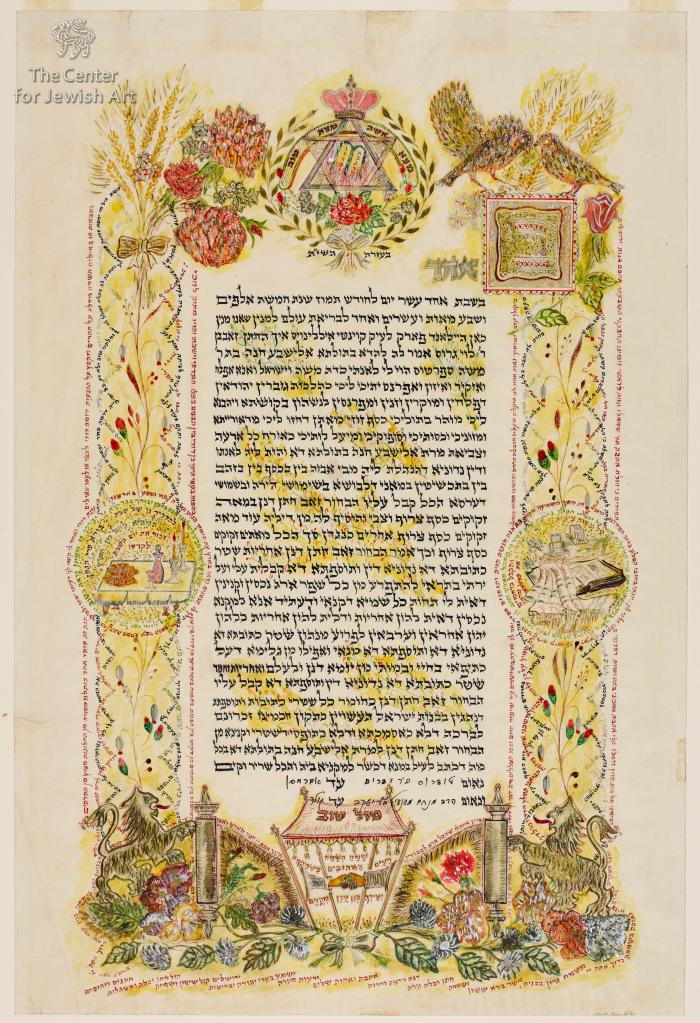 A Ketubah (Hebrew: כְּתוּבָּה ; "written thing"; pl. Ketubot) is a special type of Jewish prenuptial agreement. It is considered an integral part of a traditional Jewish marriage, and outlines the rights and responsibilities of the groom, in relation to the bride. The content of the Ketubah is in essence a one-way contract that formalizes the various requirements by Halacha (Jewish law) of a Jewish husband vis à vis his wife. The Jewish husband takes upon himself in the Ketubah the obligation that he will provide to his wife three major things: clothing, food and conjugal relations, and also that he will pay her a pre-specified amount of cash in the case of a divorce. Thus the content of the Ketubah essentially dictates security and protection for the woman, and her rights in the marriage.

This document is signed and then given to the bride as her property. In Italy and most of the Islamic countries in which Jews resided, such a Ketubah was often decorated, a tradition originating with the Jews in Spain. Today, generally, printed Ketubot are used.

This modern Ketubah was made by a Holocaust survivor, a rabbi/scribe from Czechoslovakia living in Minneapolis.  He arrived there after the War and was employed as a Hebrew teacher, having been a Sofer Stam, a professional Hebrew scribe, before the War. Leo and Lillian Gross commissioned him to make Ketubot for their children. This one was made for the marriage of the present owners of the Gross Family Collection. Parts of the decoration of the Ketubah are representations of the objects used in the Jewish obligations of the Jewish man and woman. The microcrographic writing contains verses taken from the Song of Songs and the text from the wedding ceremony. The date of the wedding was June 25, 1961 (11 Tamuz 5721) and took place in Highland Park, Illinois. The long tradition of hand-written and illuminated Ketubot that began to disappear in the final years of the 19th century because of inexpensive printed documents has experienced a renaissance in the last few decades. This is an early example of that resurgence of interest in hand-decorated marriage contracts.