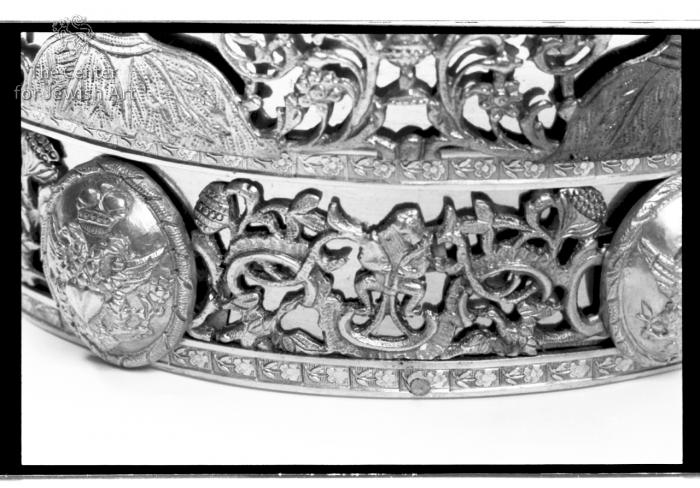 The lower level as the main part has a coronet like base, composed of two circumferal bands. Each band is mounted over a ring decorated with flowers. The lower band is a strip of scolls with protruding medallions. Each medallion bears a crowned double-headed egle. The scrolls between the medallions emerge from a bear who sits in the center and holds their stems in its hands. On the lower part of the strip, from both sides of the bear are open-winged birds facing each other.

The lower band is surmounted by a band decorated with an alternated pattern of seven branches Menorah and a vase of scrolls. The Menorah has a foliage shaped branches and a pattern of leaves on its base and is flanked on each side by a bird that stands on the scrolls which emerge from the vase.

Six arms, are attached to the base and raised up above the vases. Each arm is decorated with flowers and leaves and they are connected together by a horyzontal band decorated with dots from which hang bells.

The arms are joined together on top by a dome decorated with a lion, a snake, a deer and an eagle surrounded by a foliate and geometric pattern.

The dome is surrounded by a parapet-like coronet and is surmounted by the tables of the covenant inscribed with the begining of the ten commandments.

Two rampant lions facing each other stand on both sides of the dome, and support with their front legs the tables and the base of the crest. In front of the tables are two rampant unicorns that support a crest-like banner. The banner is inscribed with an inscription in square fieled letters which is read:

On the rear side of the dome is a deer which holds an unclear thing in its front legs. A bell hangs from the center of the dome.

The crest which is mounted on the tables of the covenant repeats the shape of the main part but it is decorated only with foliaet motives and lack the bands with the bells. A globular apex with a floral disk surmounts the crest. On the inner side of the crown it is inscribed in rounded letters: