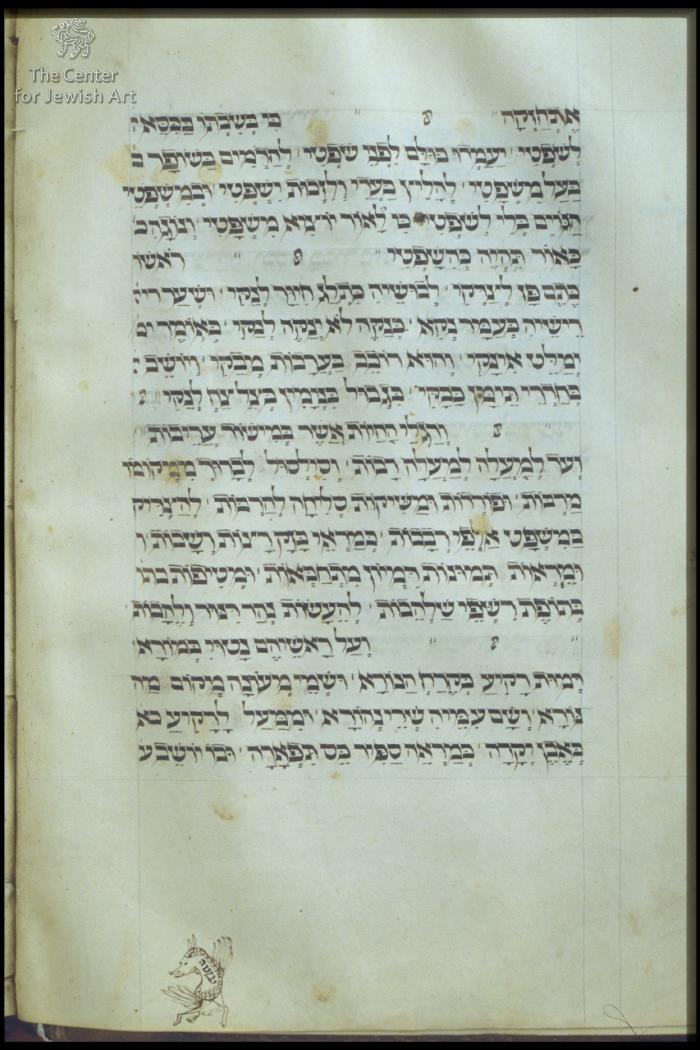 The decoration was done at the same time as the production of the manuscript.

In the 19th century a parchment leaf was added to the manuscript with text and decoration (fols. 1-1v).

B.      Two fully-framed pages for the piyyut Ohil  (אוחיל) for the Musaf prayer for the second day of New Year (fol. 138v) and for the Kol Nidrei (כל נדרי) prayer for the Day of Atonement (fol.162v).

G.     Shaped text at the end of sections: the last two pages of the first day prayers are written in a shaped text (fols. 87v, 88) and also the last page of the second day of New Year prayers (fol. 155v)

A later addition to the manuscript was done inFrankfurt, 1842:

The scribe Moshe son of Menahem, who copied this Mahzor for New Year and the Day of Atonement prayers for the evening only, states in the colophon that he completed the production of the manuscript on February 22, 1415. The fact that he declares the manuscript finished indicates that he did not include the next volume with the rest of the Day of Atonement prayers. The colophon does not say where he produced the manuscript nor the identity of the wealthy Jew who commissioned this beautiful illuminated mahzor with rich initial word panels. However, we can assume that the original owner of this manuscript served as a cantor since a few notes in the manuscript are referring to the cantor (e.g. fols. 84v, 118). Moreover, the Torah reading sections are copied twice in the manuscript, once with vocalization and punctuation and once without them (fols. 44v-48; 119-121v) to serve as a practicing tool for the cantor in order to study and memorize the correct reading from the Torah scroll in the synagogue, which does not include any vocalization and punctuation. This is a rare phenomenon in prayer books and we know of only two other mahzorim containing this double text of the Torah readings (One is in the Tripartite Mahzor[1] (vol. I: Budapest, Library of the Hungarian Academy of Sciences, Kaufmann Collection, Ms. A384, e.g. fols. 134-136, 168-170; vol. II: London, British Library, Add. 22413, e.g. fols. 28v-30, 132v, 160v-162; vol. III: Oxford, Bodleian Library, Ms. Mich. 619, e.g. fols. 73v-75, 195-196v, 248-249;) and the second is another 13th century Ashkenazi mahzor (Oxford Bodleian Library, Ms. 1049).   Amongst the scribe's notes is also an important one mentioning in the text a custom practiced in the city of Vienna to open the Torah ark while reciting the piyyut  'Melekh Elyon'  (מלך עליון ;fol. 108). We may deduce from the scribe’s remark that he produced it in Vienna. This custom is also mentioned by R. Isaac Tirna, who lived in Austria at the end of the 14th century, in his Book of Customs. In this book are recorded eastern European customs of the 15th century. Tirna mentions this custom of opening the Torah ark on New Year and the Day of Atonement, while reciting various piyyutim and amongst them our piyyut 'Melekh Elyon'  מלך עליון (It seems that R. Isaac refers to all the six different piyyutim in the New Year prayers that open with the same words: 'Melekh Elyon' מלך עליון.; see: Goldshmidt , p. מט (49) in his introduction)

The style of the architectonic panels of our manuscript, as well as the inhabited panels bring to mind the earlier manuscripts of the first half of the 14th century in southern Germany from the Lake Constance book illumination and recalls an early Ashkenazi model for our manuscript. Thus for example we can see the similarity between the architectonic frames in our manuscript on fol. 19v with similar frames such as those on fols. 154v and 256v in the “Vienna Siddur SemaK” (ÖNB, Cod. Hebr. 75 see catalogue…), produced in the Lake Constance region in the first quarter of the 14th century. These three panels each have a large gold initial word within an architectonic frame with a large finial at the centre and smaller ones on top of a tower's crenelated wall. The initial word panels in our manuscript should also be compared with similar panels in the "Alliance Mahzor for New Year and Day of Atonement" probably decorated in Constance in the first half of the 14th century (the Bibliotheque de L’Alliance Israelite Universelle, Ms. 24H; see: Gabrielle Sed-Rajna, Les Manuscrits Hébreux, cat. 79, pp. 208-216.)[2] Thus for example, the initial word panel on fol. 30v in the "Alliance mahzor" should also be compared with similar panels in our manuscript, on fols. 71v, 89, 96 and 190.  The composition of the panel with a large initial word decorated on top and below with one or a pair of hybrids and with a scroll of big leaves are very similar.

In fact, the closest comparison to our manuscript is the "David bar Pesah Mahzor", of the first half of the14th century, now in the New York Public Library, Humanities and Social Sciences Library/ Dorot Jewish Division **P[3] (Ms. Hebr. 248).[4] The "David bar Pesah Mahzor" is also strongly influenced by the Lake Constance school of book illumination and is similar to our manuscript (Cod Hebr, 242) in motives and in the colour palette especially the mustard-yellow colour (ÖNB Cod. Hebr. 242, e.g. fols. 19v and 90 and the "David bar Pesah Mahzor", fol. 353v- see picture in Harry M. Rabinowicz, The Jewish Literary Treasures of England  and America (New York 1962), figs. 23-25 (between pgs. 100 to 101) or on the website: digitalgallery.nypl.org/nypldigital/explore/dgexplore.cfm?topic=arts&collection=HebrewIlluminatedMan&col_id=172

We do not know how such models from LakeConstanceof the 14th century, reached the hands of the artist of our manuscript, however it is possible to conjecture for instance that such illuminated manuscripts were brought to Vienna with one of the Jewish immigration from the lake Constance region after the destruction of those communities in 1348-1349.

We do not know the identity of the artist of the manuscript, nor how many people were involved in the production of the illuminations. Many initial word panels show scribe’s letters surrounded with wavy lines and enclosed within simple frames beneath the colour (e.g. on fols. 53v, 63, 70v) Some paintings lack the wide, black ink outlines which articulate the details of birds and dragons (e.g. on fol. 162v). In one case (fol. 190) the plummet underdrawing shows more rounded leaves than the edgy coloured ones that were painted over them. Whoever the artist was, he was bold enough to extend beyond the decoration space which the scribe allocated, by covering some words of the text with the decoration as, for example, on fol. 19v where he covered the last two words of the text with a finial.  Some words that were covered by the panel were rewritten before (e.g.  fols. 26) or after the panel (fol. 155v). Moreover, in one case (fol. 162v) the artist left the last letter of the initial word, outside of the panel. On the other hand, there is a slight possibility that the entire manuscript was the production of the scribe Moshe ben Menahem as he claims in the colophon: “This Mahzor I copied and completed”.

The manuscript reached Germany years after its production (15-16th centuries??), as indicated by some notes in the outer margins (e.g. fols. 23, 28v, 75, 93v) referring to “Ashkenaz” (fol. 23) and the “Swabian countries” (fol. 28v).  These direct the reader to the version of the Western Ashkenaz rite as opposed to the Austrian version to which this Mahzor belongs.

In August 5, 1842, our manuscript reached the Rothschild family in Frankfurt when Salomon Mayer of the Viennese branch of the Rothschild family (1744-1855; the second son of Mayer Amschel Rothschild) purchased the manuscript in the city of Nuremberg for 151 gold coins as a gift to his son Anselm Salomon (1803-1874). We know that Anselm also received another illuminated manuscript of Talmud Bava Kama on the occasion of his bar mitzvah in 1816 (New York, Yivo Institute for Jewish Research, see: Mann, From Court Jews to the Rothschilds, cat. 87, p. 169). The Rothschilds are known as collectors of other medieval Hebrew illuminated manuscripts such as The "Rothschild Miscellany", Italy, Ferrara?, c. 1479, (Jerusalem. IM, 180/51). After 1855 the manuscript was sold to the Rothschild family in Paris and remained there until it was stolen during the Nazi occupation and reappeared after the war in New York. Someone tried to sell it to Alexander Marx, librarian at the Jewish Theological Seminary, who realized it had been stolen from the Rothschilds and returned it to them in London. James de Rothschild was persuaded by Mordechai Narkiss, director of the Bezalel Museum in Israel, that a manuscript of such importance was a national treasure and therefore belonged in Israel. In 1957, on hearing of Narkiss' illness, James de Rothschild sent it as a gift to Jerusalem.The “Rothschild Mahzor”, Florence, 1492 (New York, JTS ms. 8892) which was in the 19th century in the collection of Henri de Rothschild in Paris and given to the JTS by Baron Edmond de Rothschild of Paris in 1966; The “Rothschild-Weil Mahzor”, northern Italy, c. 1470 (Jerusalem, JNUL Heb. 80 4450)- a gift of Mrs. J. de Rothschild from the collection of her late husband, James de Rothschild, London 1968 through Mr. E. Eilat; The “Murphy Haggadah”, Northern Italy, mid 15th century (Jerusalem, JNUL Hebr. 40 6130). The manuscript was part of the collection of Baron Edmond de Rothschild in Paris. Plundered by the Nazis during World War II, it was later given to Yale University by Murphy.  The “Murphy Haggadah” was given by Dorothy Rothschild as a gift to the JNUL in 1981.

[2] This manuscript was copied in the 13th century probably in Ulm, in the first quarter of the 14th century however some paintings were added, probably inConstance

[3] F 32487.- see the microfilm project information on this manuscript. For three pictures of this manuscript see: Harry M. Rabinowicz, The Jewish Literary Treatures of England  and America (New York 1