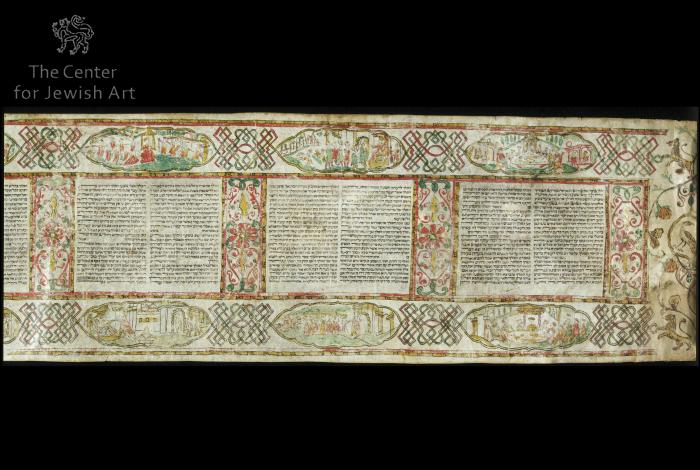 Here, 7 columns of the text and 6 cartouches containing the images (in the image two of them are partly visible) are separated by the endless knot motifs. In the spaces between the text panels, repeating floral motifs are placed.

Cartouche 1 (upper margin): At the center, within the scenery of the palace gardens, the crowned and bearded King Ahasuerus sits on the throne under a high canopy at a round laid table. He is flanked by three men on the right and four men on the left, all of whom wear turbans and long gowns (Es. 1:3-8). On either side, there are arcaded buildings in which two groups of four figures sit at a table.

Cartouche 2 (lower margin): The crowned Vashti, within the scenery of the palace gardens, sits under a high canopy at a round laid table. She is flanked by three women on either side. On the right, a group of servants, all wearing turbans, enter the garden through a gate on the right; the first of them addresses the queen. Probably, they come with the king's order that Vashti should appear before him and his guests (Es. 1:10-11). The scene of the left can depict the moment when the queen, after her refusal, is taken from the palace by two men (alluding to Es. 1:19).

Cartouche 3 (upper margin): On the right, the bearded Ahasuerus sits on the throne and is accompanied by the seven princes of Persia and Media. He holds a scepter in his left hand and his other hand points to a man, probably Memucan, who stands before him. Six other men stand behind Memucan (?) and a soldier holding a shield stands behind the king's throne. The scene shows the moment when the king asks his advisers for a piece of advice as to the further fate of Vashti (Es. 1:13-20). On the left, two king's messengers ride on horseback towards a city in the background (Es. 1:21-23).

Cartouche 4 (lower margin): At the center, a group of women is brought to the king's court (Es. 2:1-4). They are lead by a man wearing a turban (most likely Hegai) who holds the first one's hand (Es. 2:8). A carriage drawn by two horses can be seen in the background on the left.

Cartouche 5 (upper margin; partly visible): In the center, the bearded Ahasuerus wearing a turban is seated on the throne with a canopy and is flanked by eight men in turbans who sit on benches. Both hands of the king are outstretched and in one of them, he holds a crown which he is about to place on the head of the kneeling Esther. Behind her, four women stand (Es. 2:17).

Cartouche 6 (lower margin; partly visible): On the right, Mordecai wearing a turban stands within a gate in the wall and looks at two men who are probably Bigthan and Teresh (Es. 2:21). On the left, Haman is approaching Ahasuerus who is sitting on a raised throne with a canopy. The king holds a scepter in one hand and in another he has a ring that gives to Haman (Es. 3:10). A man, possibly a guard, stands behind the throne. There is a fountain in the center of the cartouche.

The meaning of the remaining illustrations in the scroll is the same as in Gaster I scrolls.

The scroll is preserved in poor condition which partly may be caused by the materials of lower quality used for its production.

The text is preserved better than the decorations.

The sheets are rather dirty.

The scroll is formed of 2 sheets containing 19 columns of the text (inscribed in 10 panels) with 23 lines, except for col. 16 which has 11 lines divided into two parts.

The first sheet contains 10 columns of text and the second contains 9 columns.

The text is inscribed in Hebrew square Italian script in black ink of different shades, on the flesh side of the parchment membranes that are of medium thickness and rather stiff. The side of the text and decorations is brighter than the blank side that is darker, rather yellow, and dirty.

Tagin are added only to the letters in the first few lines.

There are some elongated letters in the scroll.

The ruling is almost invisible; only some traces of the lines can be discerned.

All details are contoured with black lines, which alludes to the print of Gaster I type scrolls.

The sheets are not even and due to this, it is difficult to measure them.

The inventory number of the scroll on the blank side of its beginning is visible.

The scroll is rolled in a different way than it is customary for megillot - the text and decorations are outside rather than inside.

In the flowers of the floral decorations separating text panels, 7-pointed stars are visible.

Michael E. Keen, Jewish ritual art in the Victoria and Albert Museum, London 1991, object 35, p. 52. Additionally, a fragment of the scroll is reproduced on the catalogue's cover.